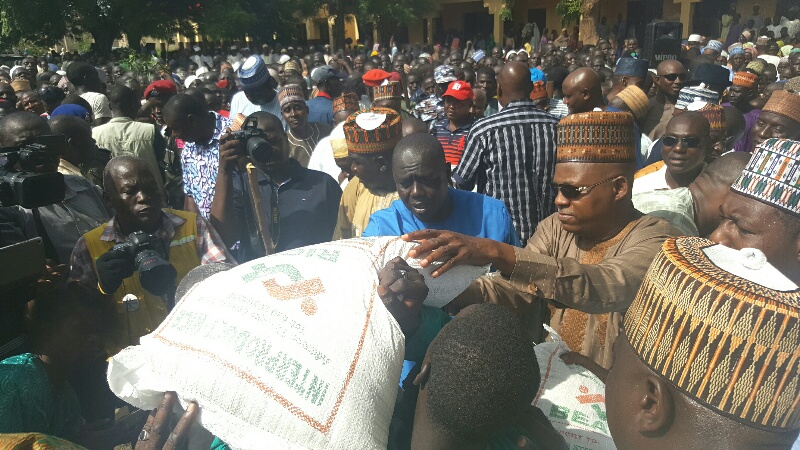 The Borno State government has Sunday flagged off a food distribution programme using $1 million cash donation recently made by the Bill and Melinda Gates Foundation.

The programme involves direct distribution of rice and beans as well as helping displaced communities cultivate farms in safe locations.

Flagging off the programme in the liberated village of Mainok, 65km away from Maiduguri, the state capital, Borno State governor, Kashim Shettima, said the intervention became necessary with the emerging peace in the state.

Hundreds of villagers gathered in the village primary school where the food items were being shared.

“It is in this regard that we are gathered here today to flag off the distribution of a key intervention of $1 million food and farming aide donation by the Bill and Melinda Gates Foundation”, said Mr Shettima.

The governor said the donation was the first cash donation received by the state government since the floodgates of donations opened in the state.

He said, “It is the state government that is carrying out procurements in the implementation of this particular intervention, which is targeting returning and resettling communities by giving them food aide and also helping them return to their family ways of producing food themselves and commercial purposes.

“The intervention from the Bill and Melinda Gates Foundation is being used for food supplies and to fund farming activities for households.”

Speaking earlier, the state commissioner for Reconstruction, Rehabilitation and Resettlement, Babagana Umara, under whose ministry the programme is being implemented, said “as a preliminary stage, beans is being cultivated in a 100 hectares of land acquired by his ministry.

“Half hectare of land is being allocated to a farm-family with a target of reaching 200 households,” he said. Adding that “each household may have from 2 to 10 families members”.

He said the farms have been established in Konduga and Damboa Local government areas and each household is allocated fertiliser and other improved seeds and a support service of farm extension officer.

The targeted beneficiaries of the direct food distribution are expected to get a 25 kilogram bag of rice and a 10 kilograms bag of beans.

The intervention is expected to reach 40,000 insurgency victims.

Representatives of the UN system in Maiduguri, Cesar Mbav Tshilombo, who is the Head of the United Nations High Commission for Refugees (UNHCR) in Maiduguri, commended the state government for its passion in ensuring that the displaced people of hidden state.

“I have been in the humanitarian services for over 22 years and I have visited 42 African countries, but it is the first time I have seen Africans taking care of their own population by dealing with the crisis like the way I have seen in Borno. I am also commending the ways things are being fixed in Nigeria…we know the times are hard but the government is trying. We in the UNHCR are to lend our helping handing to what the government is doing.

“For us as a protection entity we will like to say that this crisis is a protection crisis and the food distribution that is going to be in place today is also provide a solution to the problems that is why we commend the Bill and Melinda Gates Foundation and also the government of Borno State for making the project a reality.

Why we declared Journalist Salkida, others wanted — Nigerian Army