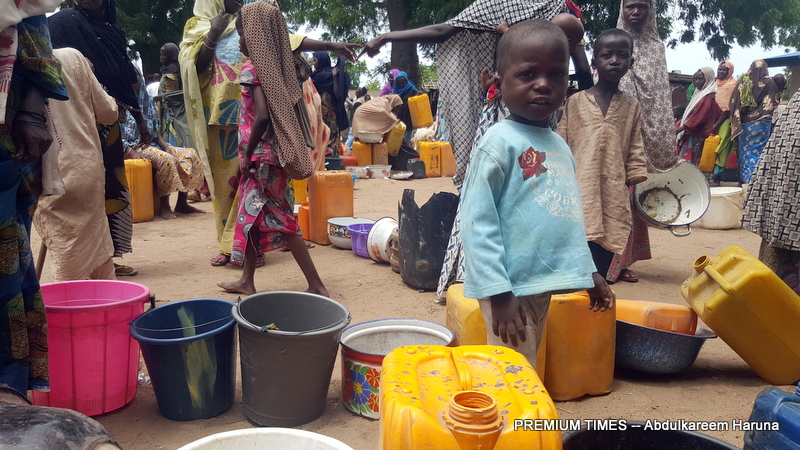 At the Bama IDP camp in Borno State where over 300 children reportedly died from malnutrition two months back, feeding is still a major problem for the displaced people there, a delegation from the House of Representatives were told on Tuesday.

PREMIUM TIMES was in Bama when the House joint committee on IDP and Human Rights, led by Sani Zoro, visited the desolate town.

Bama is just 85km from Maiduguri, the Borno state capital, but driving through the poor road network, littered with dozens of military checkposts, took about two hours.

Camped within the compound of the completely destroyed Bama General Hospital, 24,792 IDPs, comprising of 3264 men, 6466 women, and 15141 children, live a life of sorrow and deprivation.

The IDPs resorted to self-help by building makeshift shelters using burnt corrugated iron sheets picked from razed houses in the town. They still have one major problem – hunger.

Upon arrival in Bama, the Reps committee were received by the military command in Bama.

The soldiers told the lawmakers their role in setting up the IDP camp.

The military officers said most of the IDPs in the camp were those that had over time been rescued from captivity of Boko Haram in villages and hamlets around Bama and Gwoza local government areas of Borno state.

Gwoza is about 40km from Bama.

Aid workers like those from the Medicins Sans Frontier (IMF), the State Emergency Management Agency and representatives of the World Food Programme (WFP) were at the crowded camp dishing out medical and feeding support to the inmates and children.

The WFP was mainly supplying its anti malnutrition supplement known as Plumpy Sup to children. Officials handling the programme said “every child is given a supply for a month”.

The soldiers also organised a remarkable school programme in the camp where about 12,000 children were being taught how to read and write. Most of the children were assembled in the open under a scorching sun as soldiers and volunteer IDPs dished out the best they could offer in knowledge to help the children maintain contact with school life.

PREMIUM TIMES observed that everything in the camp seemed to be going on fine within the limits of available resources, except for food and feeding.

Then suddenly, as the lawmakers spoke to camp officials, the IDPs began a protest after they heard the state government-owned State Emergency Management Agency (SEMA) officials informing the federal legislators how they regularly feed the IDPs. 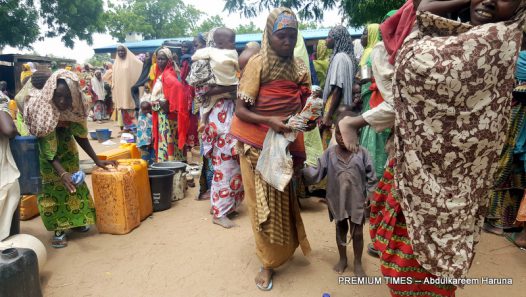 The secretary of SEMA claimed that each of the IDPs received enough food, mostly rice and beans to last them two weeks when they were expected to get another supply.

That claim triggered angry reaction from the IDPs – as both men and women who began to shout “lies, lies, lies! One of the IDPs was heard threatening to beat up the SEMA official should the officer continue with what he called “useless lies”.

The situation almost went out of control before soldiers quickly moved in to control the tense situation.

They provided protection for the lawmakers who had already been encircled by the angry IDPs.

When the leader of the delegation was able to get the ears of the miffed inmates at the camp, he asked some of them to explain the true position of things.

A middle aged IDP, who identified himself as Modu Bukar, said “initially when we came to the camp some months ago, feeding was not a big issue because the soldiers provided us with three square meals per day. But since the SEMA moved in to take the feeding programme things went bad. As a matter of fact, they would only give a bag of 50kg rice for 30 to 25 persons to feed with for two weeks. How do they expect us to survive with it for God sake? Even if we are to manage to cook and feed from it once in a day, a bag of rice shared by 30 people would not last three days.

“And we will not see the officials again until after two or three weeks. This is not fair. We took our displacement as an ugly phenomenon that have befallen us and we continue to pray to God to help us out of it. But people should understand that before now, we are men and women of means, we have our homes, we have dependents whom we feed and cater for; we had means of survival; so we will certainly not take it when someone will come here and lie to the world that we are fed well or that each person gets a bag of rice. We have tolerated these lies; we won’t take it anymore.”

Responding to their complaints, the angry lawmakers blamed the camp officials for such insincerity even as they pleaded with the IDPs to be calm as the federal government would further empower the emergency management outfits to provide more feeding, and improved health care facility for them in the camp. 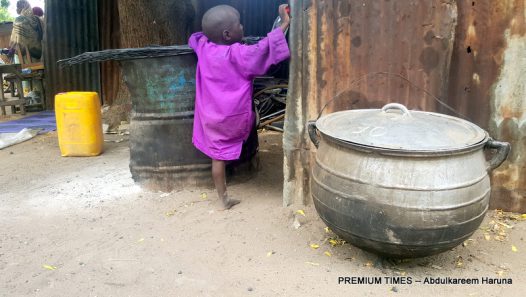 Earlier the Chairman of the House of Representative committee on IDP, Mr. Zoro had picked holes in the manner the IDPs were being managed, the lawmakers however commended the Nigerian military for doing their part effectively by rescuing the large number of IDPs from the liberated territories.

He said the best way towards achieving a lasting solution to the problems of increasing IDPs in camps is the establishment of the Northeast Development Commission.

“Even from what we have seen so far, it is clear that the fast-tracking of the process of inaugurating the Northeast Development Commission is the way out,” he said.

He said the House of Representative had decided that the headquarters of the commission, when ready, would be sited in Maiduguri, the Borno state capital, which has been the epicentre of the Boko Haram insurgency in the northeast.

Naira in stability contest against dollar