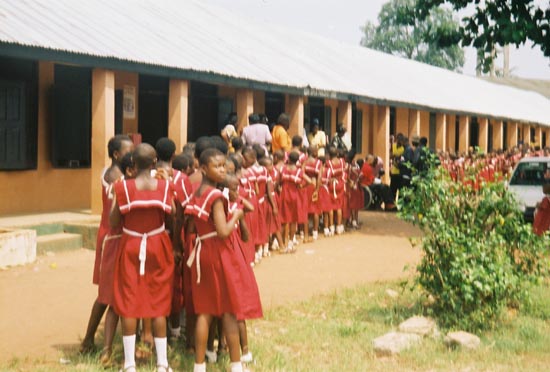 The Nigerian Military said it has re-opened the mixed primary school in Gwoza, Borno State, for the benefit of the Internally Displaced Persons, IDPs, in the area on Friday.

This is contained in a statement signed by the Acting Director of Army Public Relations and issued to the News Agency of Nigeria on Saturday in Abuja.

It said the reopening of the school was to further assist the returnees and other displaced persons with the education of their children.

The statement quoted the army as saying that the reopening of the combined primary school in Gwoza was significant as the eradication of western education was part of the aims of Boko Haram in their murderous campaign of terror.

It said that the military, in conjunction with other security agencies and security stakeholders, had put adequate security measures to ensure the safety of the pupils and their teachers.

“Already, classes have commenced and the turnout was quite impressive.

“Gradual restoration of normalcy by troops is therefore indicative of continuous elimination of the terrorists from Nigerian territory,” the statement said.

According to the statement, the troops have also dislodged Boko Haram terrorists from Dissa and Balazala villages located in the same Gwoza Local Government Area on Friday.

It said the troops rescued 23 men, 33 women and 34 children from the terrorists in the area.

The statement also said that the troops advancing from Bama had intercepted quite a number of the terrorists fleeing from Dara Jamel near Banki, the battle zone where they disguised as the IDPs.

According to the statement, the intercepted persons are being screened by troops of 21 Brigade to get more information and to confirm their true identity.