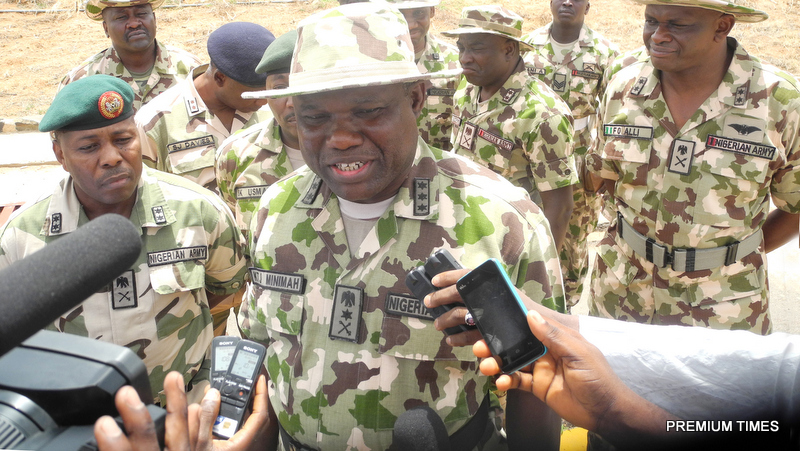 The Chief of Army Staff, Lt.-Gen. Kenneth Minimah, speaking to newsmen on the ongoing process of establishing the Yola military command and control centre, during his visit to Yola on Wednesday (10/6/15). 3034/10/6/2015/AMA/BJO/NAN

The Chief of Army Staff, Kenneth Minimah, said the Nigerian Army is working in collaboration with the military in Lake Chad Basin to fight terrorism.

Mr. Minimah, a Lieutenant General, made the disclosure during a visit to Yola, the Adamawa State capital, as part of the process of establishing a military command and control centre in Adamawa.

He said Nigeria has a cordial working relationship with the rest of the world particularly in the Lake Chad.

“There is a good working synergy between countries in the lake Chad Basin Authority and Nigerian Army in the fight against insurgency”.

“Recently, the Chief of Defence Staff had a meeting with his counterparts across the region which is aimed at fighting Insurgency,” said Mr. Minimah.

The Army Chief said with the cooperation between countries, there is hope for success.

On the rule of engagement, Mr. Minimah said “We have our own rules of engagement for operation Zaman Lafiya which every soldier must comply to,” he said.