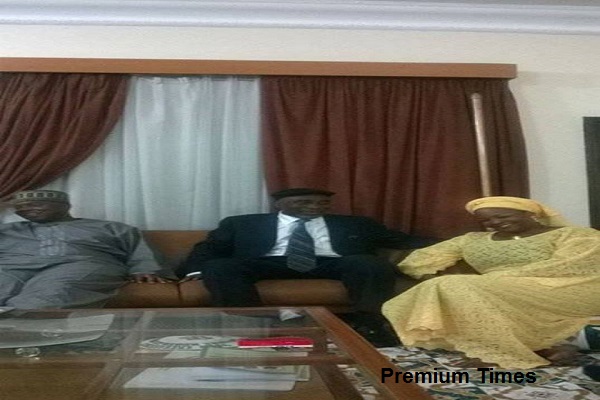 Photo: Nyako fanked by Senators Bukola Saraki and Binta Garba ​at his Abuja reside​nce shortly after he returned from the UK on Saturday.

A former governor of Adamawa state, Murtala Nyako, who was impeached by the state Assembly for gross financial fraud, has returned to Nigeria from a self-imposed exile.

Mr. Nyako and his deputy, Bala Ngilari, were impeached by the Assembly under Speaker Ahmadu Fintiri.

Shortly after his removal, Mr. Nyako fled Nigeria amid speculation​s​ he was to be arrested by the Economic and Financial Crimes Commission, EFCC.

Mr. Nyako’s supporters believed the impeachment was orchestrated by the Presidency as it came shortly after the governor wrote a scathing letter accusing former President Goodluck Jonathan of carrying out genocide against the people of the north east.

The former governor left Nigeria for Germany, then England, where he had been since July 2014.

Although his deputy, Mr. Ngilari, succeeded ​in upturnimg his impeachment in court, Mr. Nyako was not so lucky as a Federal High Court sitting in Yola last week dismissed his suit challenging his ouster.

Mr. Nyako returned to Nigeria Saturday afternoon and was received by friends and associates at the Nnamdi Azikiwe Airport Abuja. Some of those who received the former governor were​ Senators Binta Garba, Abdullahi Adamu and Danjuma Goje.

Mr. Nyako played a prominent role in the emergence of the new governor of Adamawa ​S​tate, Umaru Jibrilla.

He directed his supporters who formed the majority of the membership of the All Progressives Congress, APC, in Adamawa State to vote for Mr. Jibrilla in the two primary elections held in the state; first during the bye election (before it was cancelled by the court), and in the run-up to the 2015 election.

After his victory in the April 11 election, Governor Jibrilla said he remained loyal to Mr. Nyako. To prove his loyalty, he appointed three core loyalists of Mr. Nyako as part of the five appointments he made shortly after he was sworn in Friday.

Mr. Jibrilla announced the appointment of Umar Bindir as the Secretary to the government, SSG, Abdulrahman Jimeta, as Chief of Staff, Abdullahi Bakari as Principal Private Secretary, and Ahmed Mahmood as the Director of Protocol, while Yohanna Mathias was appointed as the Chief press Secretary.