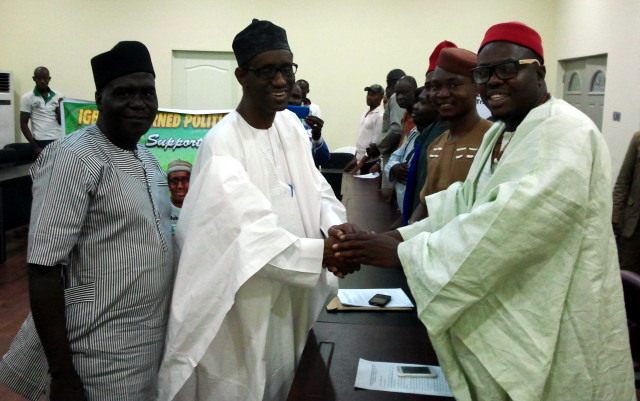 Speaking during a courtesy visit to Mr. Ribadu at his campaign office in Yola, the general secretary of ICPF, Humphrey Umejike, said the group undertook the visit to applaud Ribadu’s courage in declaring interest to run for governor of the state. He noted that the ICPF was convinced that “only a man of repute can effect the positive change that is so dearly needed in Adamawa State”.

The ICPF is made up of over twenty organisations, including traders’ union, business men and women, students, youth and professionals of South-east extraction across the 21 local government areas of Adamawa State. The group was represented by chairmen and secretaries of member organisations.

Mr. Umejike said the ICPF was aware of Ribadu’s antecedents hence the decision to support him.

“It is this high profile of yours that has motivated us to unite and channel all our energy to focus on proper and adequate sensitization and awareness of Ndi Igbo and sister groups in Adamawa State to support your candidacy,” he said.

Chairman of ICPF, Amara Enemchukwu, in his contribution said the group had supported all PDP governorship candidates in the past and would do everything within its powers to ensure victory for Mr. Ribadu.

“With our victory, you will see a difference in what governance is all about,” Mr. Ribadu noted. He said security will be a top priority if elected governor.

He urged the group to support all PDP candidates in the state starting with President Goodluck Jonathan. He advised members of the group not to relocate during the elections.

“Adamawa State will be safe. People should remain here and go about their lawful activities. This is your home. You are registered here and should vote here,” he added.