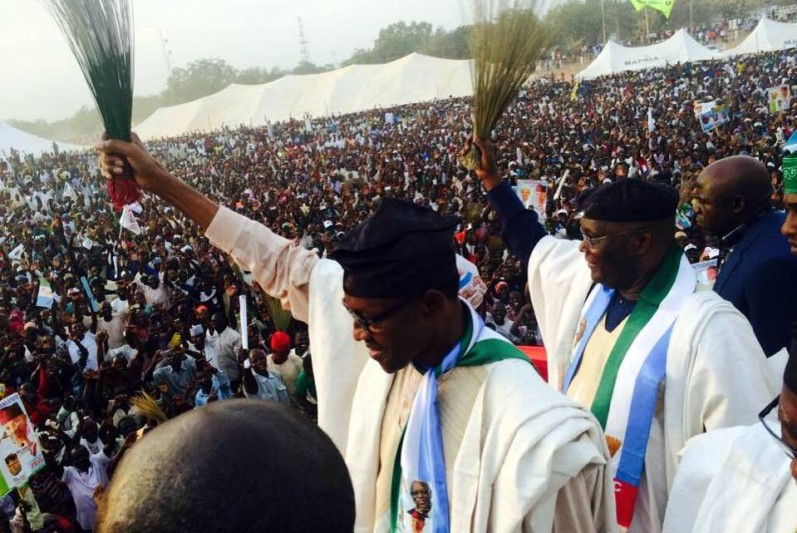 Muhammadu Buhari at the APC Presidential campaign in Yola, Adamawa

Security personnel battled for several hours on Sunday in Yola, Adamawa State, to control the huge crowd of supporters who trooped out to receive the All Progressives Congress’ presidential campaign train.

From the Yola International Airport, major roads, streets and the Ribadu Square, venue of the campaign, the crowd sang, danced and waved their broom as the party’s flag-bearer, Muhammadu Buhari, his running mate Yemi Osinbajo, the APC National Chairman John Odigie-Oyegun, former Vice President Atiku Abubakar and other bigwigs drove past.

Although the plane carrying Mr. Buhari and his team landed at the airport at about 2:30p.m., it took them almost two hours to reach the palace of the Lamido Adamawa, the venue of the event , a distance of less than 10 kilometres.

From the Lamido’s palace, the APC leaders moved to the Ribadu Square at about 4:47 p.m., throwing the arena into a frenzy, with the crowd hailing Mr. Buhari.

The APC presidential candidate told the party supporters that there was so much desperation in the Peoples Democratic Party’s camp to win the election and urged the people not to allow the party have its way.
According to him any vote for PDP would ruin Nigeria’s future.

“We should not allow PDP to ride on our back again,” Mr. Buhari said. “PDP has failed us in its 16-year rule.
People are in dire need of change. The most important thing is that you should vote. Make sure you get your permanent voter cards and on the Election Day you come out and make sure you vote and that your vote counts.

He pledged to address the problems of corruption, unemployment and insecurity if voted into office.

“Our government will bring to an end the menace of Boko Haram terror that is plaguing the society. Nigerians are turning into refugees in their country,” he said. “What we save from the fight against corruption and leakages, we will invest heavily in education, infrastructure, equipment, and teachers. The best we can do for our generation and future generation is to give them qualitative and quantitative education. An APC government throughout the country definitely will do that.”

Atiku described the PDP-led government in the country as wicked and callous, adding that it destroyed the country.

“PDP days are numbered,” Atiku said. “People want change and it has come with APC on board.”

He said February 14 was a day of destiny for Nigerians.

“The Lord God Almighty will help us that day to change the destiny of Nigeria forever,” he said. “Whenever something like that is about to happen, whenever destiny is about to be changed, you will find that there are some who do not want it to happen. That is why they want to postpone the election. Your destiny will not be postponed God willing.”