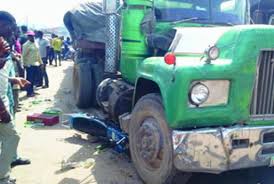 The police officer died on the spot
A mobile policeman in uniform was on Wednesday crushed to death by a trailer at the gate of the main branch of First Bank,
near Bichi road,  in Jos.

Witnesses say the police officer died on the spot as the vehicle smashed part of his head.

The trailer was coming from the Plateau State House is Assembly.

A witness, Ladi Emmanuel, told PREMIUM TIMES that the police officer was on a motorcycle going to his place of assignment.

Sources say that the victim attempted to overtake the trailer at a bend.

The victim was immediately rushed to the Plateau State specialist hospital but was confirmed dead on arrival.

The driver of the vehicle was arrested by the police and taken away from the scene for further interrogation.

The incident created vehicular traffic within the area, which houses several major business including the Jos branch of the Central Bank.

Meanwhile, colleagues of the victims who were on duty within the vicinity molested other road users.

The Plateau State government had in early 2012 banned the use of motorcycles within Jos metropolis.

However, some uniformed officials, including the police and security officers in charge of enforcing the ban, have continued to defy the directive, riding their motorcycles in the prohibited areas.