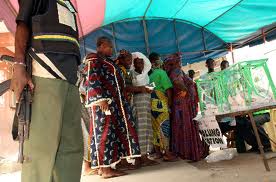 The PDP emerged the most victorious party at the just concluded LG elections in Plateau State.

The Peoples Democratic Party, PDP, has taken the lead at the local government chairmanship elections conducted on Tuesday in Plateau State.

The results so far announced by the commission in charge of the elections, Plateau State Independent Electoral Commission, PLASIEC, indicate that PDP won in the entire Northern Plateau state and some parts of central and southern zone.

In Bokkos Local Government, the senator representing Plateau North at the National Assembly, Joshua Dariye, of the Labour Party, said the election was a fraud.

According to results collated at the local level in Langtang North, Dan Dull of the Democratic People’s Party, DPP, leads Godwin Kumzhi of the ruling PDP. The result has, however, not been officially announced by the commission.

Mr. Kumzhi is believed to be the anointed candidate of the governor, Jonah Jang, against the wishes of the party.

In all the local council results announced so far, no opposition party won any of the elections.