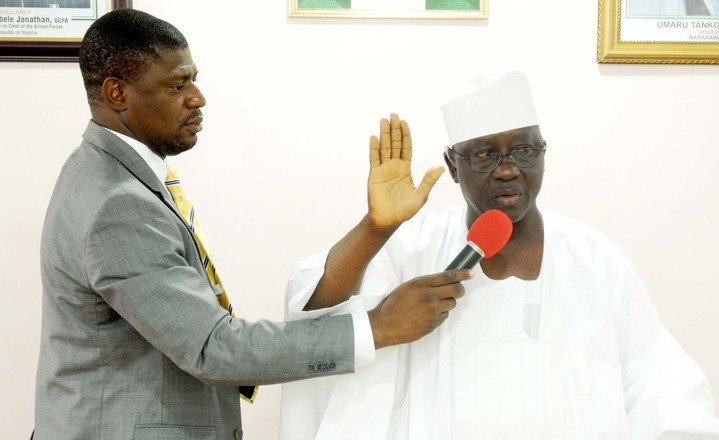 I am not against Eggon people, says Gov. Al-Makura

The governor said all Nasarawa indigenes had equal rights.

Governor Tanko Al-Makura of Nasarawa State on Friday said that his administration had not been running a regime of vendetta against any ethnic group in the stat since the entire state was his constituency.

Mr. Al-Makura made the declaration when the Eggon Renaissance Group paid him a “reconciliation” visit at Government House in Lafia.

The governor said his administration was not biased against the Eggon people, adding that he was committed to carrying everybody along in all his activities.

The delegation, led by its leader, Adamu Muazu, paid him a courtesy visit at Government House, Lafia.

“My administration will continue to carry all sections of the state along, irrespective of religious, political, cultural or ethnic differences,” he said.

The governor specifically described the Eggon ethnic group as his friends and colleagues, reminding all the stakeholders that the “state belongs to all of us”.

Mr. Al-Makura appealed to the Eggon to disregard speculations that he was against them, reiterating that he took an oath of office to carry everybody along and that he would abide by the oath.

He commended the Eggon people for their efforts to ensure peace and unity in the state.

“Because of my confidence with Eggon ethnic nation, the sky is your and my limit, as I have no reason to hold any grudge against the Eggons.

“Unfortunately, we are in period of politics; people can create so many fiction and stories to divide people that have been living together,” he said.

The governor said that security challenges that bedeviled the state in recent times were unfortunate.

He said whatever might have happened “is natural and we should forget the past and move forward, because tomorrow is more than today”.

Mr. Al-Makura commended the leaders of the Eggon Renaissance group for the solidarity visit. He said he could not forget his long time relationship with them and other tribes in the state.

The governor, however, appealed to the people of the state to maintain peace ahead of the forthcoming local government elections.

“Peaceful conduct of the local government polls is a testimony of how 2015 will look like, and the politicians should not take it as a do or die,’’ he said.

He said his administration would provide a level playing ground for the people to elect candidates of their choice.

“I will not impose any candidate on the people, the people’s choice is mine,” he declared.

The governor assured the group that he would fulfill all his campaign promise to the Eggon and other ethic tribes in the state.

Earlier, the leader of the group, Mr. Muazu said that the group was poised to reconcile the differences among the Eggon and with the governor.

He said their relationship with Al-Makura became strained as a result of the Ombatse activities which disrupted the peace of the state.

Mr. Muazu, who is also the Commissioner for Environment and Natural Resources in Nasarawa State, said there was a need for the Eggon to bury the hatchet and embrace the reconciliatory move embarked upon by their group.

He, however, appealed to the governor to appoint more Eggon sons and daughters into position of authority and provide the people with more dividends of democracy.