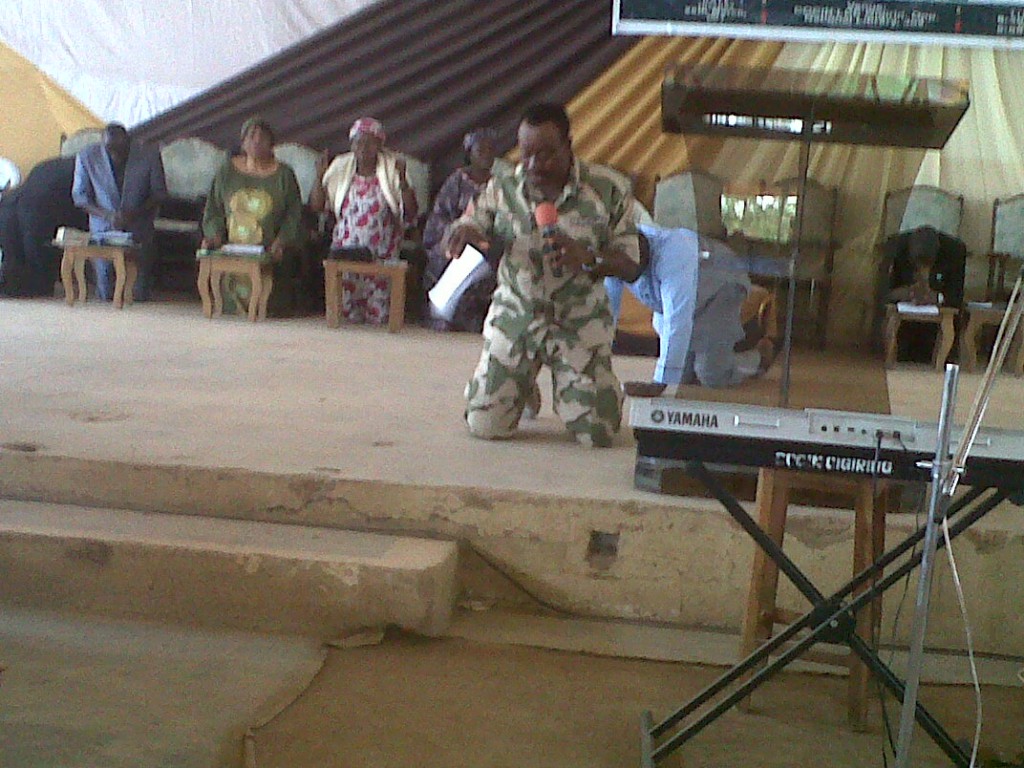 Ogun police are not the only ones hoping to stop crime with prayers - STF Commander Gen. Henry Ayoola Praying with over 1000 widows for fast return of peace in troubled Plateau State [file]

Plateau State has witnessed a surge of attacks since the last part of 2012.

Widows in Plateau State, Tuesday, gathered in six different places of the three geopolitical zones to offer intercessory prayers to God to intervene in the incessant killings in the state.

The Commander of the Special Task-force on Jos crisis, Henry Ayoola, joined the women and went on his knees to pray for the return of peace at the Church of Christ in Nigeria, COCIN, Gigiring, Howshe, Jos South Local Government Area of the State.

Speaking with PREMIUM TIMES shortly after the prayers, Mr. Ayoola explained that the reason he joined the widow’s prayer session is because God answers the prayers of the widows and the oppressed.

“When a widow cries to God for any injustice done her, God will certainly intervene, because widows occupy a special place according to Biblical injunctions, so they have favor from God,” he said.

On his part, the Chairman of the Christian Association of Nigeria, CAN, Plateau State chapter, Philip Dafes, spoke on the relevance of the event. He said the widows consist mostly of the women who lost their bread winners as a result of the violence occurring in the state, adding that 10,000 widows participated in the prayers.

He said the church decided to use the widows to intervene in the Jos violence because “widows are close to God, explaining that the Bible says “God is the husband to all widows”.

The Chairman of the Organising Committee of the prayers, who is also Jos North CAN Chairman, Bami Dele, said the intercessory prayers took place in six different locations within the state. He expressed confidence that the prayers and the fasting of the widows will be answered.

He said the widows have suffered untold hardship due to the death of the bread winners.

The widows are praying for better life and sustenance from the hardship being faced as a result of losing their husbands.

Plateau State has witnessed series of violent clashes, which analysts say is a mixture of politics, religion and ethnicity.

The crisis bedeviling the state has defied Nigerian security efforts. Some of Jos residents have even accused the Task Force keeping peace in the state of complicity in some killings and attacks.

The Special Task Force denies any complicity but has not been able to stop or at least minimise the spate of attacks which has been on the rise since the last part of 2012.

Perhaps, this explains another reason the Commander of the Special Task Force, Mr. Ayoola, joined the women in prayers, leaving the crisis in the hands of God to solve.

UN calls for end to remnants of slavery, honours memory of victims