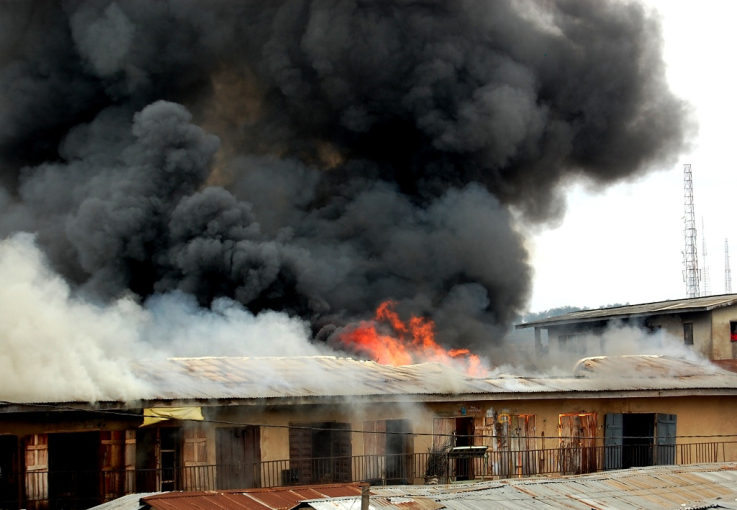 Goods worth million of naira were lost in fire that gutted 38 shops in Gombe State.

No fewer than 38 shops and goods worth millions of naira were lost in a fire disaster at Gombe Central Market on Thursday night.

The Chairman, Fish Sellers Association in the market, Abubakar Salihu, said in Gombe on Friday that only two of the 40 shops in the market were not affected.

He said that most members of the association returned from Maiduguri with a lot of fish and are yet to determine the amount of goods lost in the fire.

Also speaking, the Vice Chairman of the Palm Oil Dealers Association, Kingsley Anyanwu, described the situation as an act of God.

“We just have to thank God for the situation,” he said. “it is really bad, but there is nothing we can do about it. It seriously affected my members, because most of the shops that were burnt belong to our members,most of whom offloaded their goods yesterday.

“Right now I can’t ascertain the number of shops, but as we go on, we will identify the actual shops involved. But, goods worth millions of naira were lost.’

Meanwhile, Kimluda Yimman, the Head of Disaster Management of the Nigeria Security and Civil Defence Corp, NSCDC, Gombe Command, said preliminary reports showed that the incident occurred at about 10 p.m. on Thursday, adding that the cause of the fire is not known.

According to the NSCDC boss, the suspicion was that the fire may have been as a result of an electrical fault, since it happened in the night, and there was nobody to say specifically what went wrong.

“We sympathise with the victims and advise them to take it as an act of God and seek for government’s assistance,” he said.