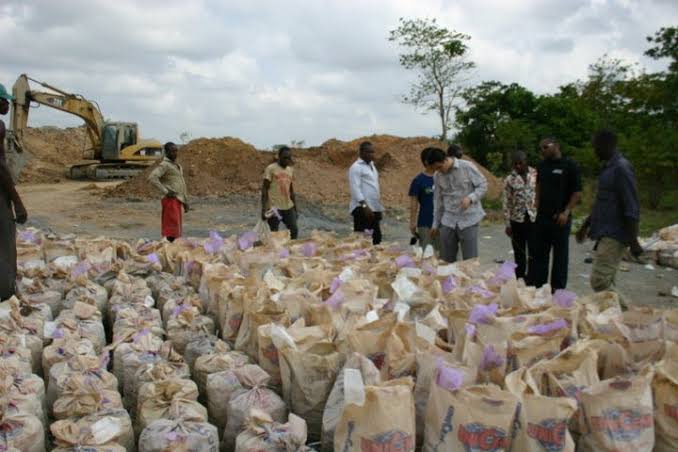 A mining site used to illustrate the story

A group, Follow The Money, has called on the federal government to immediately embark on the cleanup of Shikira Community in Rafi Local Government Area of Niger State for which N300 million had been set aside in the 2016 Budget.

The group made the call in a statement on Thursday by its Chief Executive, Hamzat Lawal.

The Shikira community was destroyed by Lead poison in April 2005, resulting in the loss of 28 lives and adverse health condition for over 300 people, mostly children below the age of five.

Lead poison interferes with the development of the nervous system and is particularly toxic to children, causing potentially permanent learning and behaviour disorders.

Follow The Money, a part of Connected Development (CODE), a non-governmental organisation, which tracks funds meant for rural communities, said it was concerned about the inability of government to announce a date for the remediation of Shikira one year after the community was adversely affected by lead poisoning.

It recounted that during a meeting with the community, the Minister of Environment, Amina Mohammed, revealed that N300 million had been set aside in the 2016 Budget to clear the contaminated area in the community.

“We are highly shocked over the federal government’s inability to announce a specific date when remediation of Shikira will commence one year after the LEAD contamination that ravaged the small rural mining community located in Rafi LGA in Niger State,” the statement said.

“And this is even more worrisome considering the fact that the Minister of Environment, Amina Mohammed, recently visited the area and declared the effect of the poisoning in the area, a national disaster.”

The group said after it discovered the epidemic last year, it alerted the relevant pubic officials of the need to intervene urgently to enable the residents of the community overcome the ugly event.

“It is exciting that Doctors Without Borders, a specialised body that render humanitarian services has indicated interest to provide free health services but on the condition that the environment must first be cleared of any contaminant,” it said.

“While we acknowledge the minister for the move demonstrated by visiting the affected site to assess the level of devastation, a sign that reinforces hope that work may begin soon, we are also very concerned about when the funds would be released to commence the actual clean-up.”

Follow The Money also asked the government to be open, transparent and accountable on how the funds are expected to be utilised just as it called for a work plan specifying project timeline, data and concrete steps on execution of the exercise.

It further demanded the prosecution of individuals and industrialists whose activities brought about the Lead poisoning.