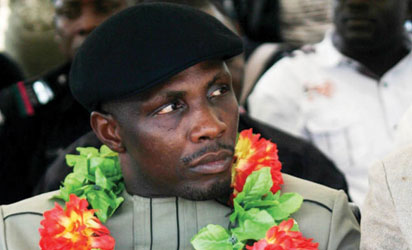 In order to check the worsening insecurity in Bayelsa that has led to increased kidnappings in the state, Governor Seriake Dickson on Monday constituted an 11-member task force to police the numerous creeks and waterways across the state and to safeguard lives and property.

The governor appointed ex-militant and leader of the a defunct faction of the Movement for the Emancipation of the Niger Delta (MEND),Ebikabowei Victor, popularly known as Boyloaf, to head the task force.

The constitution of the task force comes few days after the coalition of ex-militant leaders in the state assisted in securing the release of three high profile victims including Madam Florentina, 90-year-old mother of Senator Emmanuel Paulker, and Iniokpoemi Benson, younger brother of the Speaker of Bayelsa House of Assembly, Kombowei Benson.

A statement signed by Daniel Iworiso-Markson, the Chief Press Secretary to the Bayelsa Governor, said the task force is aimed at stemming the tide of kidnappings, sea piracy, illegal bunkering and oil pipeline vandalism that have been on the increase in recent times in the state.

Mr. Iworiso-Markson explained that the task force is expected to liaise with the Operation Doo Akpor-Marine, which is to be headed by a Naval Officer.

According to the statement, Mr. Dickson expressed deep concern over the rising cases of insecurity in the waterways.

He called on community leaders, youth and the general public to be vigilant and cooperate with the special task force as well as the various security agencies to flush out the perpetrators of criminal activities in the creeks.

According to the statement, the special task force and the leadership of Operation Doo Akpor Marine will both be coordinated by the Special Adviser to the Governor on Security Matters, Bernard Kenebai, a retired colonel.