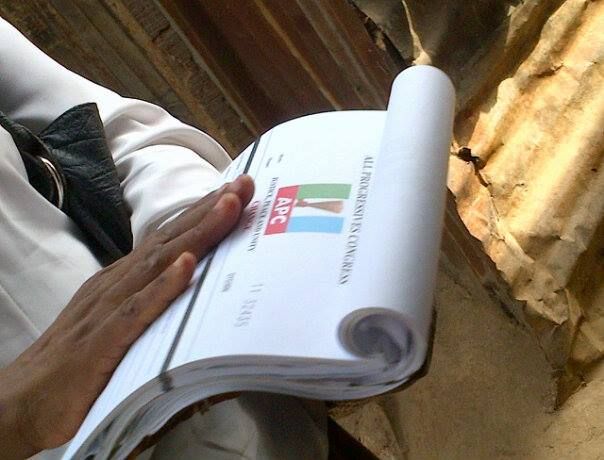 APC is conducting a nationwide registration of members.

Former Governor Abubakar Audu and an ex-member of the House of Representatives, Dino Melaye, have formally been registered as members of the All Progressives Congress, APC, in Kogi.

Messrs. Audu and Melaye were formally registered on Thursday and Friday at Ogbonicha, Ofu, and Aiyetoro-Gbede, Ijumu Local Government Areas of the state, respectively.

Mr. Audu, who arrived the Ogbonicha Ward 1 polling unit at about 2.30 p.m. on February 6 in company of top party officials, was received by a large crowd of supporters.

He was immediately taken through registration formalities before being issued his membership card.

Speaking to journalists shortly after the registration, Mr. Audu expressed delight at the turnout of people and peaceful conduct of the exercise in his hometown, saying that it was an indication that Nigerians want a change come 2015.

“Everybody wants to join APC. Nigeria needs a change, this is a new dawn. Nigeria is heading for a change and we are determined to make APC a success,” the former governor said.

He said that the national headquarters of the party had provided enough materials to register as many people as possible, saying that the target was to register two million people in Kogi alone.

The former governor, who also monitored the exercise in Ejule, Aloma, Ochadamu and few other communities, urged party members to remain focused and dedicated to the ideals of the party, warning them against any act of violence.

In a separate interview with journalist at Aiyetoro-Gbede, Mr. Melaye said that he was impressed by his people’s enthusiasm for the APC.

He lauded the registration officials for their dedication to duty and appealed to the people to continue to be peaceful in their conduct while the exercise lasted.
(NAN)

DPP asks INEC not to interfere in parties’ affairs