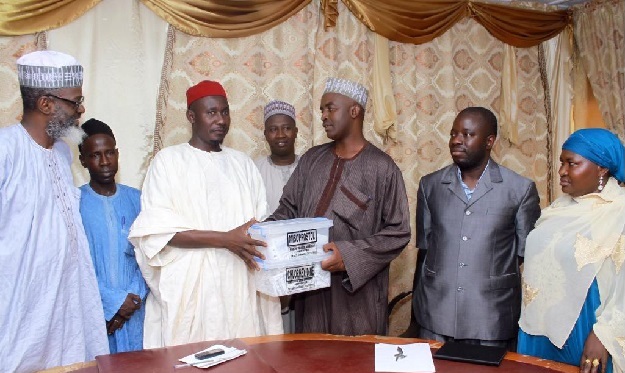 The drugs will help in the prevention of post partum hemorrhage (PPH) in women during child delivery and cord care infection among newborns.

The Sokoto State Government on Thursday, through the Ministry of Local Government, MoLGA, concluded the distribution of two lifesaving medicines: Misoprostol and Chlorhexidine to all 244 wards in Sokoto state, a statement by the USAID and other partners to the state government has said.

The distribution of the drugs- which help in the prevention of post partum hemorrhage (PPH) in women during child delivery and cord care infection among newborns- started on April 17 at the headquarters of Sokoto South Local Government Area and ended in Rabah local government.

This Approximately 90 per cent of all births in Sokoto take place at home.

Aminu Buda, representing MoLGA, presented the packaged bins containing the two medicines to the Chairpersons or their representatives at each of the LGAs during a seven day itinerary. The medicines will then be handed over to the chairpersons of the Ward Development Committees, WDC, for distribution by community-based drug keepers.

Umaru Muhammed, Chairman of Isa LGA said, “I appreciate the Almighty God and the Governor of Sokoto, for the provision of these medicines; it is a great burden that has been lifted from my head and will be a relief to our communities. I call on all WDC chairmen and drug keepers, to exercise due diligence in ensuring that this scheme is a success.”

Another community leader, Yusuf Attahir, said, “These medicines have been given to us in trust for the use of the masses, I plead with all drug keepers and community based health volunteers’s (CBHV) to ensure that the medicines are dispensed free of charge to women and children when needed.”

Mr. Attahir pledged to monitor the use of the medicines, saying any drug keeper found wanting will be held accountable.

Sokoto purchased the drugs to enable the reduction of child mortality and improve maternal health in line with goal 4 and 5 of the Millennium Development Goals using simple grass root approach such as Ward Development Committees (WDCs) and community-based drug keepers.

The state financed the purchase of 56,832 doses of each of the medicines with an estimated prevention of 2,250 newborn deaths from cord infection and up to 1,000 maternal deaths due to PPH from results of evidence based advocacy from the United State Agency for International Development (USAID) and Targeted States High Impact Project (TSHIP).

Nosa Orobaton, Chief of Party USAID/TSHIP commended the commitment of the Sokoto State Governor, council chairmen, and ward leaders towards the Improvement of MNH in the state.

“We are impressed by the vibrant and seamless leadership commitment from the Executive Governor to LGA Chairmen to WDC Chairmen,” Mr. Orabaton said

The Minister of State for Health, Muhammad Pate in a round table conference with the media in March applauded the Sokoto State Government’s initiative and called on other state governments to take a cue from the state.