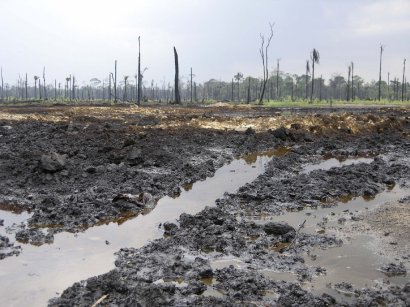 The governor of Kogi State says the crisis in oil bearing communities of Kogi and Anambra States must be stopped.

Governor Idris Wada of Kogi State on Tuesday in Lokoja, expressed concern over the deteriorating security situation in oil bearing communities in border areas between Kogi and Anambra states.

Mr. Wada also condemned the alleged killing of four people and abduction of two others in attacks on Odeke and Echeno communities in Ibaji Local Government Area of Kogi by unidentified persons.

He said the situation in the border communities require urgent attention of the affected states and the Federal Government; saying the situation must be brought under control immediately.

The two communities have been at loggerheads with communities in Anambra over the location of four oil wells now being exploited by Orient Oil.

The governor appealed to leaders of the two communities who came to his office to protest against the attacks to remain calm and promised to get in touch with his Anambra counterpart to find a lasting solution to the problem.

He also promised to ensure that the two men abducted by the attackers regained their freedom as soon as possible.

He directed the deputy governor to immediately take up the matter with the appropriate quarters.

Mr. Wada promised to ensure immediate supply of food, water and other basic items to the people displaced from their homes by the attackers.

He said all necessary support would be given to the police for the maintenance of law and order in the communities.

The Spokesman for the communities, Daniel Omatola, told the governor that four of their people were killed in series of attacks recently launched by some persons suspected to be from Anambra.

He also said that two other persons from the communities were abducted by the attackers whom he said had also destroyed homes and farmlands, thereby displacing hundreds of people from their homes.

Mr. Omatola called for urgent intervention of the state government, saying that his people were finding it increasingly difficult to stand the unwarranted attacks and killings of their kinsmen.