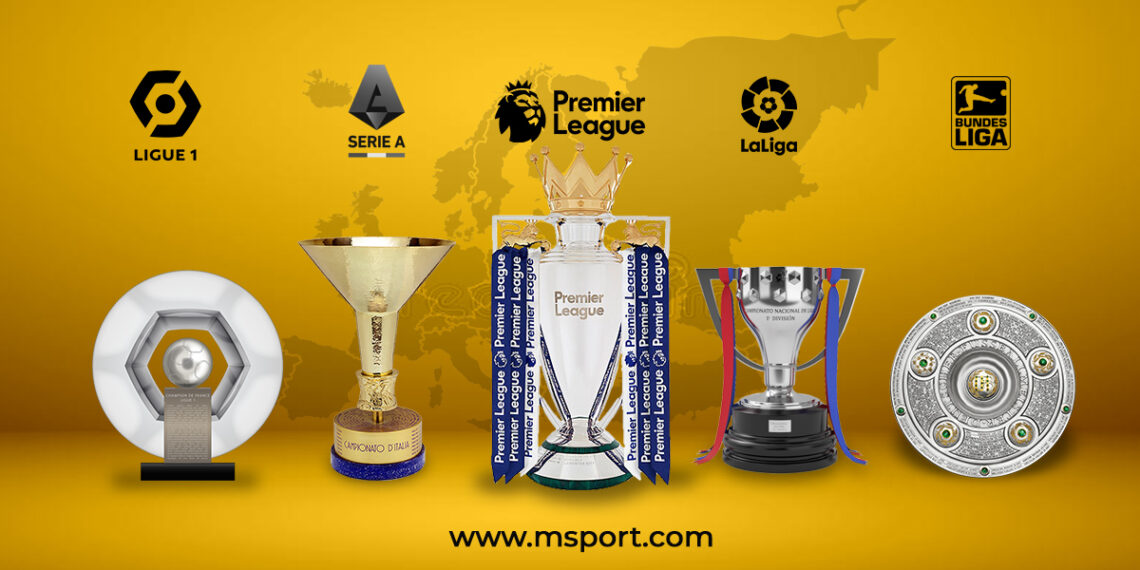 The Five major football leagues in Europe are; The English Premier League (EPL), Bundesliga, La Liga, Serie A, and Ligue 1. The EPL is for England, Bundesliga for Germany, La Liga for Spain, Serie A for Italy, and Ligue 1 for France. Each league consists of different clubs participating in yearly competitions to win the league title.

Arsenal: Currently at the top of the EPL table is the almighty Arsenal football club. So far this season, they have done incredibly well on the pitch, making their fans happy. They have the 3rd highest Premier League title in the history of The English Premier League, which started in 1899. They have the best form currently in the EPL. Out of 17 matches played as of the time of writing this article, they have won 14 games, drawn in 2 matches, and lost 1 match to Manchester United. Players like Martin Odegaard (7 goals, 5 assists), Bukayo Saka (6 goals, 6 assists), Gabriel Martinelli (7 goals, 2 assists), Gabriel Jesus (5 goals, 5 assists), Granit Xhaka (3 goals, 4 assists), and others on the team, it is almost sure that Arsenal will remain at the top of the EPL table until the end of the season.

Manchester City: Man City, popularly called by fans, has won 8 Premier League titles. They are number two on the Premier League table in the current season. As of the time of writing this article, they have played 17 matches, won 12, drawn in 3 matches, and lost 2. With a few points below Arsenal on the EPL table, they are holding tight to the second position. Time will tell if Man City can end the league as the second-best football club in EPL or, perhaps, snatch the first from Arsenal.

Manchester United: So far, in 2022/2023, as of the time of writing this article, they are the only football club that has been able to defeat the current EPL table topper, Arsenal. In this EPL season, as of the time this article is being written, they have played 17 matches, won 11, drawn in 2 matches, and lost 4. They are currently in the top 4 on the EPL table. In the last 5 matches played by the club, they have lost just one match and have won the other 4 matches.

Tottenham Hotspur and Liverpool: currently, Tottenham and Liverpool are very close to one another on the EPL table. If we judge by the number of times Liverpool has won the EPL title (19 times) and the number of times Tottenham have won the EPL title (2 times), we are just going to conclude that Liverpool will step up their game and move up on the table. In this 2022/2023 EPL season, Liverpool could have performed better. We do not know where or whom to point fingers at, but we know there were cases of injured football players at the beginning of the season.

Chelsea, the 6 times Premier League title holders with so many injured players have performed woefully in the league. At the 10th position on the table, they have played 17 matches, won 7, drawn in 4, and lost 6. In the last 5 games they played as of when this article was written, they have lost 3 matches, drawn in 1, and won one.

Newcastle: The Newcastle football team is currently the third on the EPL table for the 2022/2023 season. Things have changed positively in the team since the club was sold in 2021 and new management took over. They are currently contending with Manchester United for the third position and with their performances so far this season, they might just stand a chance to hold on to their position or make it to the top four on the EPL table.

MSport wants you to enjoy all 5 major European leagues while enjoying the best odds and fantastic promotions on its betting platform.

You can win an iPhone 14 in the Santa’s Xmas and Classy New Year lucky draw by placing more bets on the platform and earning more points. Register on MSport now to enjoy this bonus on www.msport.com and get up to N500,000 on your first deposit.

In the 2022/2023 season, Bayern Munich sits at the top of the Bundesliga table. A 121-year-old Munich-based club that ranks top among all-time Bundesliga title winners and held that position for 9 straight years between 2012 and 2021. They have won 31 times. They have dominated the GermanBundesliga League for so many years. In this 2022/2023 season as of the time of writing this article, they have played 15 matches, won 10, drawn 4 times, and lost 1 match. With 34 points, they are on top of the table and will likely hold on to that position judging from their history.

Clubs like SC Freiburg, RB Leipzig, Eintracht Frankfurt, Union Berlin, and Dortmund are also doing well in the leagues. Dortmund, MSport’s official partner, they have significantly improved in the last three games. They have won 3 games out of the last 5 games they have played. With this, they will surely make their way to the top of the table.

Real Madrid, the second on the La Liga table this season with 38 points, has won the highest number of the Spain La Ligaleague title. With 35 league titles, they are above Barcelona, which has 26 league titles. Barcelona is topping the table in the 2022/2023 La Liga season. The question now is if Real Madrid, with 38 points as of the time of writing this article, can win over Barcelona with 41 points. Is it Barcelona’s time to add one more title to the 26 they have? Real Sociedad, Real Betis, Atletico Madrid, and Villarreal are strong contenders for the top 4.

MSport has more amazing promotions for you to enjoy during this football season. Make sure you open an MSport account today to get started.

Juventus has the highest number of Italy Serie A league titles in the history of Serie A. Next to Juventus are AC Milan and Inter Milan with 19 Italy Serie A league titles each. In the 2022/2023 season, Napoli, a two-time Serie A league title holder, is on the top of the Serie A table with 44 points, followed closely by Juventus (37 points), AC Milan (37 points), and Inter Milan (34 points). What has Napoli done differently this season? Nigeria-born football player, Victor Osimhen, is Napoli’s highest goal scorer so far this season and the highest goal scorer in Serie A as of the time this article is written. He has scored 10 goals as of the time of writing this article, for Napoli this season. With a skillful football player like Victor Osimhen, it is almost certain that the league title belongs to Napoli this season. However, Juventus, AC Milan, and Inter Milan following closely might stand a chance.

PSG is the Ligue 1 football club with the highest number of France Ligue 1 league titles (10). They are also currently leading on the Ligue 1 table with 44 points, having played 17 matches, won 14, drawn in 2, and lost just one match. PSG is closely followed by Lens with 40 points, while Marseille and Rennes have 36 and 34 points, respectively. PSG has fantastic world-best football players like Messi, Mbappe, and Neymar. Judging from how wonderfully these three players played at the world cup, it will be difficult for the other four football clubs to snatch the first position from PSG.