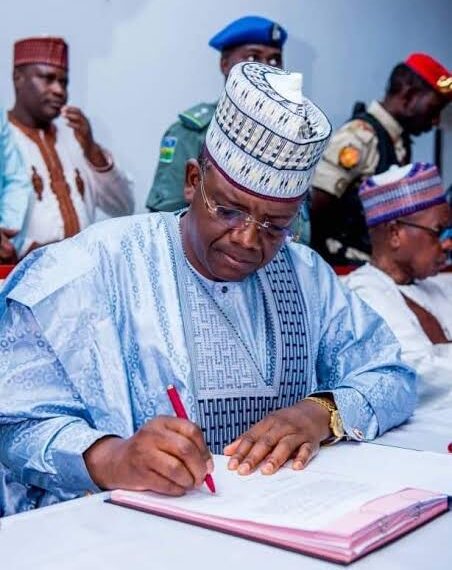 In a statement issued on Thursday in Gusau, the Dauda Lawal Media Office accused the state government of allegedly using the police to arrest members of the PDP in the state.

The Peoples’ Democratic Party (PDP) in Zamfara State has accused Governor Bello Mohammed Matawalle of planning to mass arrest its key members to silence the opposition in the state.

In a statement issued on Thursday in Gusau, the Dauda Lawal Media Office accused the state government of allegedly using the police to arrest members of the PDP in the state.

The party claimed that in Zamfara, its key members were being hounded and forcefully picked up by the police, such as the recent arrest of Ikra Aliyu Bilbis, a former Minister of State for Information and the Director-General of the PDP Governorship Campaign Council.

The statement read in parts: “Zamfara State Peoples’ Democratic Party wishes to alert the general public that it has secured intelligence information that the Matawalle-led government has perfected plans to clamp down on notable opposition party figures in the state within a few days.

“The proposed unguided plan is to come up with trumped up charges and insist that security agencies, especially the police arrest and charge such opposition party members to court.

“The plan has been activated with the illegal arrest of the Director-General of the Governorship Campaign Council of the Peoples’ Democratic Party in the state, Ikra Aliyu Bilbis.

“Former Minister, Ikra Bilbis and some members of our great party were arrested and detained by the police on the orders of the State Governor. Also arrested on trumped up charges is Captain Bala Mai Riga, who has been in detention for a while.

“Our source has confirmed that key members of the PDP were identified for an unjustifiable arrest, including our governorship candidate, Dr. Dauda Lawal, and state acting Chairman of the PDP, Mukhtar Lugga.

“We, as a result of this, call on well-meaning Nigerians and the good people of Zamfara to impress upon the Matawalle-led government not to heat the polity with this ill-advised decision to clamp down on opposition party figures. The APC in Zamfara State should be reminded of the fragile security situation in our dear state. Clamping down on opposition party members on trumped up charges could lead to the breakdown of law and order.

“We also call on all relevant security operatives, the Independent National Electoral Commission (INEC), National Peace Committee, and International Communities to do the needful to restrain Governor Matawalle over this blatant abuse of power.

“It would be recalled that in October, we petitioned the Inspector-General of Police (IGP), Usman Alkali Baba, over unlawful harassment by security agents on the orders of Governor Matawalle.

“The petition was to call the attention of the Inspector General on the safety of our members in Zamfara due to the credible information at our disposal that the state government had activated a police squad to eliminate members of the opposition. This is exactly what is at play in the state.

“It is a great concern how Governor Matawalle uses state apparatus to harass and intimidate opposing voices. As the last hope for the common person, we also strongly call upon the judiciary to uphold fairness and justice and not be allowed to be used as tools for the political persecution of our members; where Justice is turned on its head, we’ll have no option but to take necessary measures as stipulated by the Nigerian laws.”

“The Zamfara State PDP, therefore, demands the immediate release of every PDP member arrested by the police as well as instant stoppage of the planned draconian arrest of members in the state ahead of the 2023 elections.”