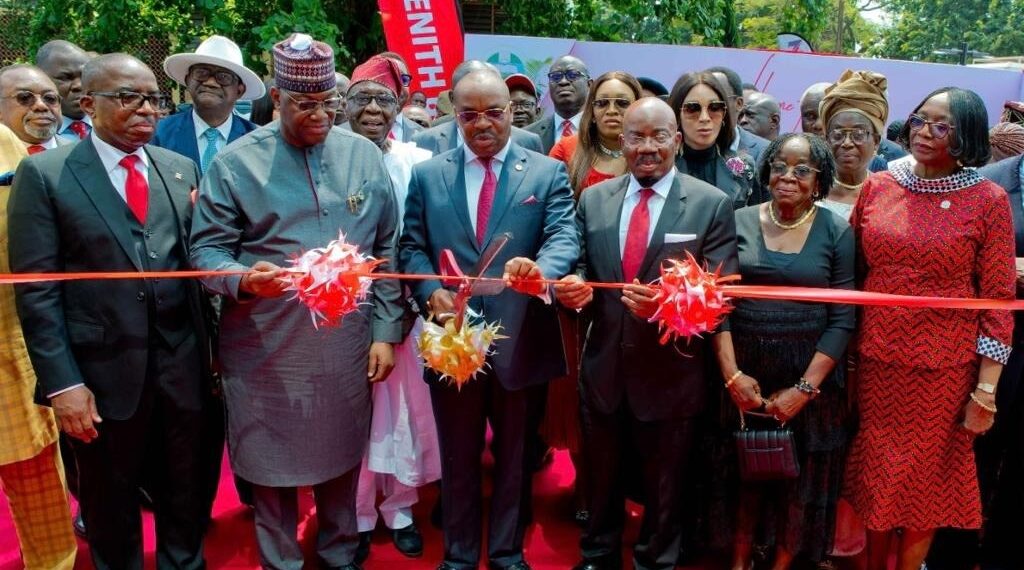 Onyeagwu also recalled how Zenith Bank’s partnership with the University of Lagos began in 2001 with the donation of the first ICT centre, when the founder and Chairman, Jim Ovia was the Group Managing Director/ CEO of the bank

The memory of Professor Oyewusi Ibidapo-Obe, a former Vice Chancellor of the Universityof Lagos, came alive as Zenith Bank Plc named the iconic building housing its Unilagbranch and the University of Lagos (Unilag) Alumni in his honour on Friday, 25 November, 2022.

In his opening remarks at the commissioning ceremony, the Group Managing Director/CEO of Zenith Bank Plc and Chairman of the Body of Banks’ CEOs in Nigeria, Mr Ebenezer Onyeagwu, lauded the founder and Chairman of the bank, Dr Jim Ovia, CFR, for being physically present at the commissioning of the building to honour the memory of his late friend, Prof. Oyewusi Ibidapo-Obe, who served on the board of Zenith Bank as a Non-Executive Director, and for his passion for youth education and digital learning.

He noted the remarkable and continued commitment of Jim Ovia, CFR, to education andyouth development in Nigeria, especially through the setting up of James Hope College, aco-educational institution which offers a combination of British and Nigerian curricula, andthe James Hope University, which is billed to commence academic activities next year. Healso extolled his philanthropy through the setting up of the Jim Ovia Foundation andMankind United in Total Support for Education Initiative, which has awarded scholarshipsand produced over 1500 graduates from among indigent people who would not have hadthe benefit of having a university education.

Onyeagwu also recalled how Zenith Bank’s partnership with the University of Lagos beganin 2001 with the donation of the first ICT centre, when the founder and Chairman, Jim Oviawas the Group Managing Director/ CEO of the bank. According to him, “Today, Zenith Bank has built not less than 15 ICT centres in various tertiary institutions and cities all over the country. And I just want to say that no single institution or individual has been able to accomplish what we have done in that respect. And this is a demonstration of the passion our Founder and Chairman has, not just for education, but also for digital learning and computer literacy. This is in addition to several other support to the university, including the institution of Academic Excellence Awards in 2001, where the best graduating students from selected departments – Banking & Finance, Business Administration, Economics and Accounting, receive awards with financial rewards (currently NGN500,000) and employment opportunity, and the donation of 3,500 tablets to enable indigent students of the university to learn online effectively in 2020 during the Covid-19 pandemic”. Onyeagwu noted that the building is a strong statement of Zenith Bank’s sustainability initiatives as a signatory to several global sustainability frameworks including the United Nations Principles for Responsible Banking, as it incorporates many of the elements that make a facilityenvironmentally friendly and sustainable.

Speaking at the commissioning of the iconic building, His Excellency, the Executive Governor of Akwa Ibom State, Udom Emmanuel noted the huge contributions of ZenithBank and, in particular, Jim Ovia, CFR, a man he described as a father, to the development of Nigeria. In his words,” when you see things being done consistently in the right way, there is always a man pointing in that direction. A lot of people ask me how come you are doing so much in public service; I say I come from a background where my mentor told me that you don’t report efforts, you don’t give excuses, but you report results. So no matter the situation, even in the midst of an economic recession, in the midst of Covid, you should not stop development and performance. As far as you are from the Zenith family, you are expected to have that creativity and ideas that can make you produce results. In Zenith, wesay only the paranoid survive. So I really want to appreciate what I am seeing here today”.Whilst thanking the alumni association and the school authority for their collaborative efforts towards achieving capacity development, which he described as the bane of Nigerian Society, he expressed his delight and honour to commission a building named after the revered Late Prof. Oyewusi Ibidapo-Obe, who touched and impacted so many people while he was alive.

In his address, the National President of Unilag Alumni Association, Dr. John Momoh,thanked the Founder and Chairman of Zenith Bank as well as the management of the bank for the magnificent building and Mrs. Sola Ibidapo-Obe for accepting the association’srequest to name the building after her husband as a lasting legacy in his honour. He encouraged everyone to take good care of and maintain the building to serve the university community for years to come.

In her remarks, the Vice Chancellor of the University of Lagos, Prof. Folasade Ogunsola, acknowledged the invaluable contributions of Zenith Bank to the development of the school, promising to work with the Alumni association to ensure that the facility serves not only the Alumni but also the entire students populace. She thanked the Founder and Chairman of Zenith Bank, Jim Ovia, CFR, for donating 3,500 tablets to the university, which ensured that students who could not afford laptops for e-learning during the covid-19 pandemic were not left behind.

In her remarks, the wife of the Late Prof. Oyewusi Ibidapo-Obe, Mrs. Sola Ibidapo-Obe,thanked the Founder and Chairman of Zenith Bank, Jim Ovia, CFR, for immortalising herlate husband with such a great edifice named after him. Recalling how close he was to herlate husband, Mrs Ibidapo-Obe said: “You are my husband’s friend. Dr. Jim Ovia hasdemonstrated the love that does not die in his friendship with my beloved husband. Whenhe fell ill, Dr. Jim Ovia was there from day one till the last moment. I could feel the way he felt. From then, I knew that he was a genuine friend. He tried his best to ensure my husband survived, but he did not”.

The iconic building, which sits on a total site area of 950m2, was constructed by a team ofworld-class builders who had the mandate of delivering the best quality possible. The iconicstructure is a smart building that incorporates many of the elements that make a facilityenvironmentally friendly and sustainable, including a grid-tie solar system that sustainspower load on solar and not on a generator or national grid, an inverter-driven VRF airconditioning system and motion sensor lighting to enhance energy efficiency, perforatedaluminium composite panels for natural lighting and ventilation, free Wi-Fi system to provideinternet access for students, fire management systems, including fire hydrant, smoke detector, and fire alarm system, and a LED screen installed on the building for thedissemination of information. The iconic building will house the Unilag Branch of Zenith Bank Plc and the operations of Unilag Alumni. Of the total 1,665m2 of floor area designatedfor office use in the four-storey building, 585m2 will be used by Unilag Alumni.

3 Home Improvement Ideas to Give your Home a Luxury Upgrade

How leaders can win with better Self Awareness— Professor Roger Delves