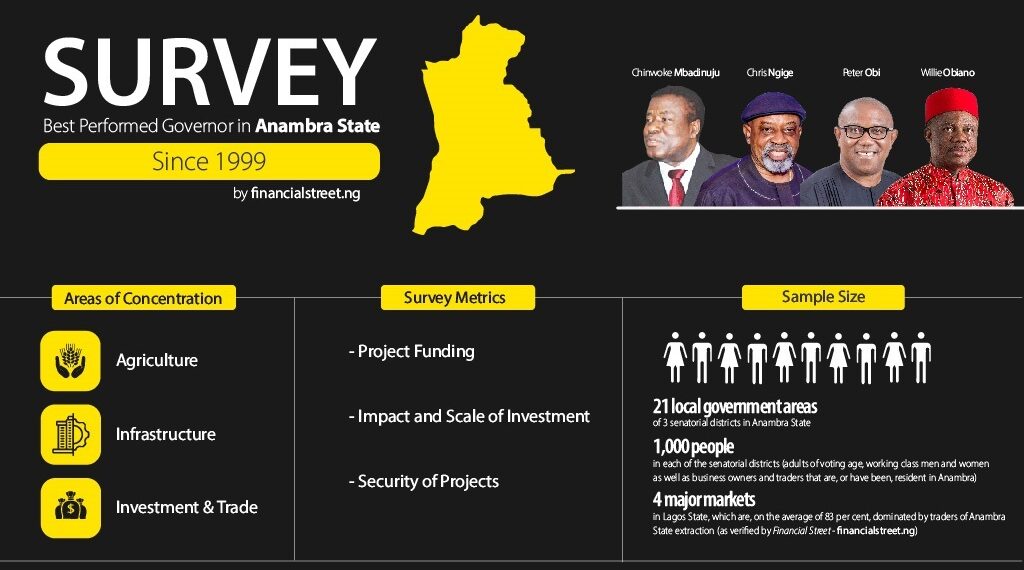 Obiano’s administration was reportedly focused on introducing leadership reforms for optimum social impact, devoid of media fanfare that beclouds the real performance of state governors while they are in office.

The immediate past governor of Anambra State, Willie Obiano, has been rated as the best chief executive of the state in the past 23 years, particularly in the areas of infrastructure, agriculture, trade and investment.

Obiano’s administration was reportedly focused on introducing leadership reforms for optimum social impact, devoid of media fanfare that beclouds the real performance of state governors while they are in office.

In a survey conducted by a financial literacy and content platform, Financial Street (financialstreet.ng), which targeted project funding, impact and scale of investment as well as security of projects, the immediate past governor was credited with excellence in the three areas.

Speaking on Wednesday, in Lagos, while releasing the result of the survey, the Director of Operations at Financial Street, Mr Ifendu Iwenofu, explained that the firm decided to embark on the poll to gauge public perception on government performance and project relevance to the people.

He said researchers from the firm went round the 21 Local Government Areas of Anambra and administered open-ended questions to a random sample size of 1,000 persons in each of the three senatorial districts.

Iwenofu said those targeted were adults of voting age, working class men and women as well as business owners and traders that are/were Anambra residents.

“The researchers also went round four major markets in Lagos State, which are, on the average of 83 per cent, dominated by traders of Anambra extraction,” the operations director said. 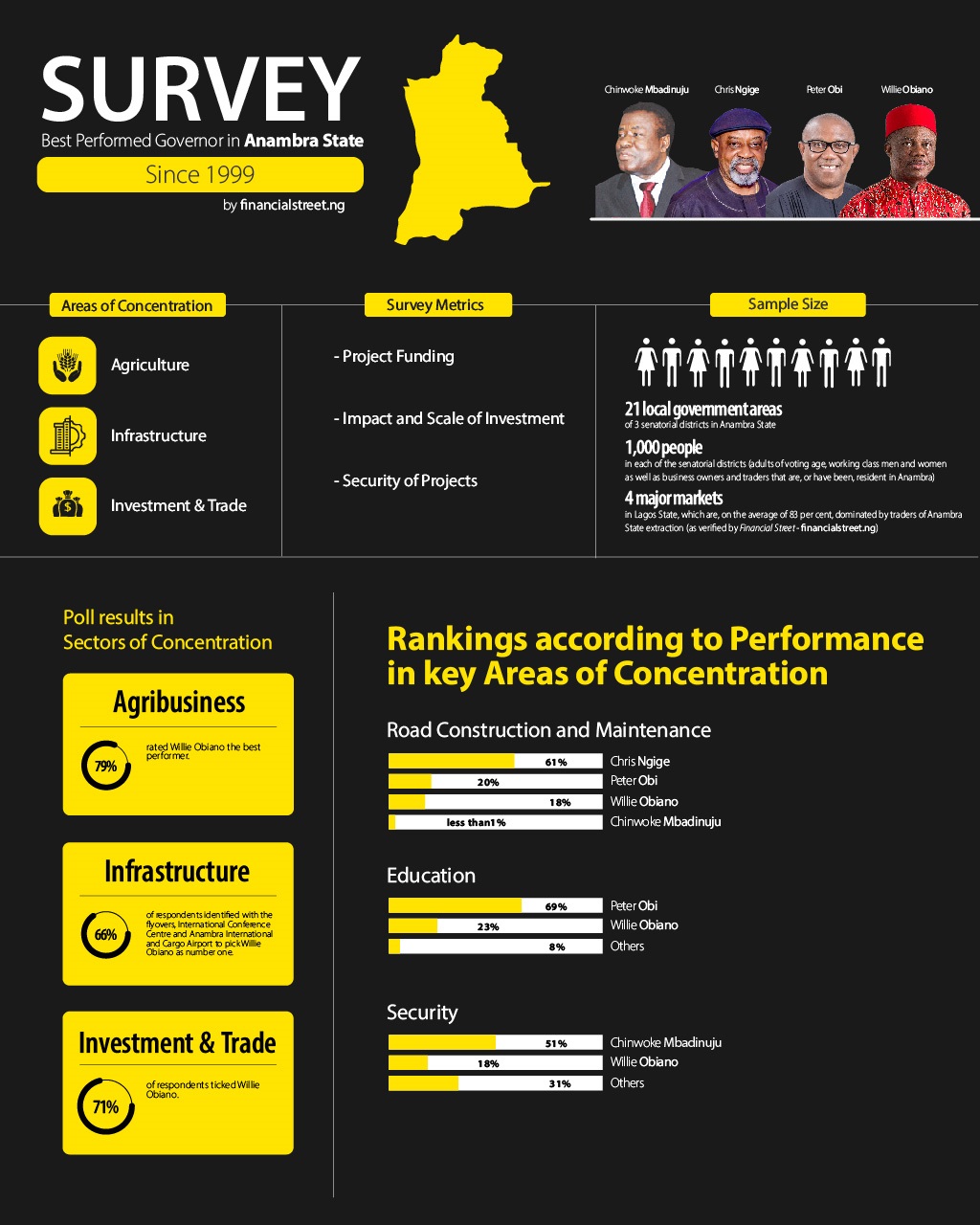 He added, “Financial Street decided to pick Anambra as a state of interest among three others that were selected. Similar polls will be conducted in Ekiti and Osun states in January or February 2023.”

Iwenofu disclosed that while 79 per cent of respondents rated Obiano above former governors in the area of agribusiness, 71 per cent and 66 per cent said he performed better than previous administrations in investment/trade and general infrastructure, respectively.

Findings from the poll show that about 61 per cent of respondents rated Dr Chris Ngige as number one in the area of road construction and maintenance, with Peter Obi (who succeeded Ngige) and Obiano scoring 20 per cent and 18 per cent respectively.

A graphical presentation of the poll results shows that the administration of Obi came tops in education with 69 per cent. Dr Chinwoke Mbadinuju scored 51 per cent in security, while Obiano got 38 per cent.

“In rating Obiano high on the three sectors, projects that the respondents easily identified were the signature flyovers, the Anambra International Convention Centre and the Anambra International and Cargo Airport. Those polled recalled the former governor’s exploits in enhancing the Anambra Ricebrand, as his administration introduced the first digital databank for Anambra farmers and active situation room for progress monitoring and evaluation,” Iwenofu stated.

On Ekiti and Osun states, he disclosed, “Financial Street is collaborating with development partners to examine the impact of democratic governance on the socio-economic development of Nigerians.”

He said the essence of conducting the surveys after the administrations had wound up was to allow the respondents exercise ultimate freedom to give unbiased answers.

The platform’s director maintained that eight months after the last administration in Anambra, it was easy to reckon with public recollections and ratings of previous administrations, which he said showed that incremental progress was being recorded as Nigeria’s democracy endures.

“By May 29, 2023, Nigeria’s democracy would have clocked 24 years and we, at Financial Street, believe it would be time to do a practical evaluation of various trends and tendencies in states.

“In Anambra, we were able to analyse the data and found that a world of difference exists between actual performance by governors and what the media celebrate during their tenures.

“The outcome of the poll is interesting, because the former governor was not active on the media. Real public perception about programme relevance and impact can only be gauged after the life of a particular administration,” he noted.