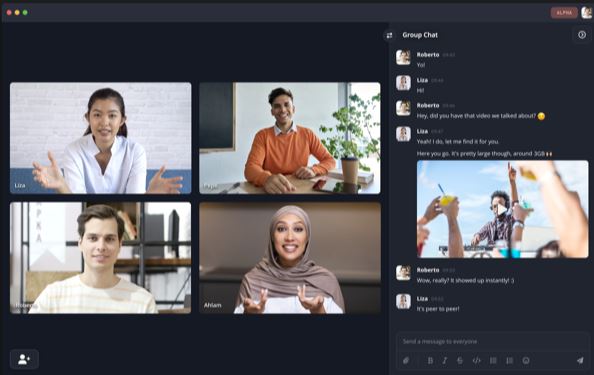 P2P applications are a viable solution, they do not require central servers, therefore your data is not stored, everything is sent from the recipient to the recipient without intermediaries.

Many times we do not understand the power of certain tools until the need knocks on our door. The internet was just a fancy way of sharing information for many people in the 80’s, an excellent example of this is the Bill Gates interview on the Letterman show; however, time passed, society evolved along with the world, and today the problems that the internet solves are indisputable.

Today technology can be both a solution and an issue, it depends on which side of the story you are on, to be honest we are not just users of technology and its innovations but we have also become a product for large companies. Sometimes something as simple as a conversation with your friends is being processed, stored, and sold without your knowledge, but it doesn’t have to be this way, although many haven’t figured it out yet.

P2P applications are a viable solution, they do not require central servers, therefore your data is not stored, everything is sent from the recipient to the recipient without intermediaries. But beyond this, it is a real possibility to create infrastructures that promote the defense of the fundamental rights of our society.

Holepunch, as a company focused on creating P2P solutions, is powered by Hypercore technology (which is a P2P data network similar to the Blockchain) so that any developer can collaboratively and friendly build a new ecosystem of Apps based on this technology.

All of this technology will be publicly available as an open source SDK (usually a set of software development tools that allows a developer to create a computer application for a particular system) in December 2022. That said, what solutions could be created with this technology?

Keet is the first example of what can be achieved, a P2P messaging program, made in collaboration with Bitfinex, Tether, and Hypercore. Keet made possible a real-time communication channel without intermediaries, private and secure, and plans to integrate payments in BTC and USDt. Currently, keet is only available for desktop, but soon it will have a mobile app, something that would be interesting, since Keet, due to its infrastructure, does not require limits to share files. Having the possibility of sending terabytes of information without any inconvenience it’s interesting, and given the capabilities of smartphones today, also a desirable advantage.

Tether and Bitfinex are great promoters of financial freedom, but now with Keet they become important players in freedom and access to information, for example, on April 10, Paolo Ardoino, CTO of Bitfinex and Tether announced a relief fund of 25 BTC for the Salvadoran people, followed by another donation of 36 BTC, in addition to encouraging others to send contributions in both BTC and ETH and USDt. We normally see how companies in the cryptocurrency space focus their development only on somewhat banal products if we take into account only its social impact, which is why it is so important that actors with the history and reputation of Bitfinex and Tether support, finance, and promote tools whose main objective is not profit, it is freedom.

Keet perfectly exemplifies the importance of P2P applications, their operation uses different elements such as private keys, which give you the power to be the only one who can access and control the data you share. By design, Keet cannot store the data of its users, for this reason it cannot use them, much less sell them.
Although the main concern is freedom of expression, it cannot be ignored that not using centralized servers improves the quality of communications, since it economizes the necessary resources to create an optimal channel for information to flow.

Another attractive solution, to be built on top of this technology, could be email services with P2P technology, understanding that several computer servers are used to route emails, leaving a copy of the email in each one. The vulnerabilities do not end there, passwords can also be compromised, as they are stored on these servers.

Troy Hunt, a Microsoft Regional Director, in his article about the leak of 1,160,253,228 unique combinations of email addresses and passwords, makes it very clear that a hacker can have huge databases of other companies, without them realizing it. Millions of people have their usernames and passwords leaked, waiting to be used by some hacker, however, there are other elements to take into account.

An email service that can store and mark emails, can also censor users, or simply deny them services, this can happen in situations where these decisions become arbitrary. The importance of creating censorship-resistant solutions should not be underestimated, and Bitcoin is a great example of this, if we can create uncensorable money, surely we can go further.

You can’t have freedom of speech, without first having the ability to communicate without a central entity “supervising” what you say. We can see this in social networks like TikTok, where the algorithm censors videos that use certain words, even to the point of altering the language with which users communicate.

As stated at the beginning, many times the usefulness of a technology is not obvious, unless circumstances force you to see it. The number of “social” apps creates a false sense of freedom, but today more than ever we are witnessing how large companies reinforce their narratives while reducing the spread of others contrary to them. Although we are not yet in a general Corporatocracy, much of the life of our society takes place in a digital environment with a lot of influence from corporations.

P2P Apps allow us to empower a society that today has to conform to the guidelines proposed by new forms of tyranny. If they can’t impoverish us, if they can’t silence us, if they can’t veto us, power ceases to reside in a few, and is redistributed among millions of individuals, and that potential can be delivered to us by technology.

Perhaps to reach the massification of P2P Apps we have to increase awareness about the dangers of companies accumulating our data in a massive way; however, it is important to acknowledge the steps that are being taken today, and Holepunch is taking a leading role in this.

Fortunately, this technology will be open source soon, and the possibility that anyone with the right skills can build on this new infrastructure, can lead to a very accelerated growth of a P2P ecosystem. That said, it only remains to witness the scope that the solutions we build today will have in the future.