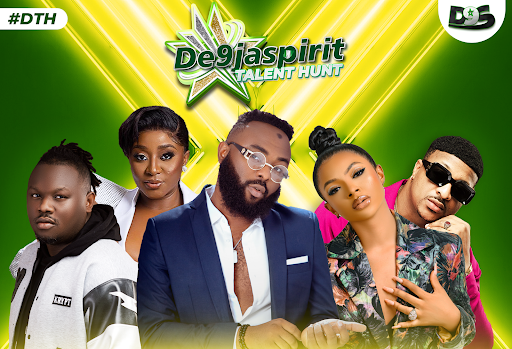 DE9JASPIRIT Talent Hunt Season Two is back on our screens

One of Africa’s Most decorated Talent hunt DTH, is back on our screens with its Second Season. De9jaspirit Talent Hunt is aimed at discovering, showcasing and celebrating amazing talents in Nigeria and soon beyond.

One of Africa’s Most decorated Talent hunt DTH, is back on our screens with its Second Season. De9jaspirit Talent Hunt is aimed at discovering, showcasing and celebrating amazing talents in Nigeria and soon beyond. 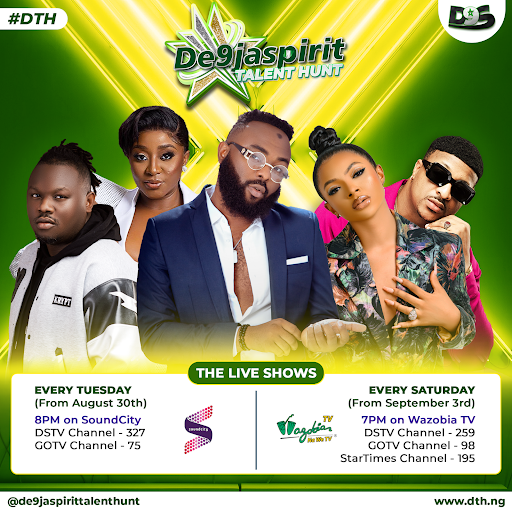 Anchoring the second Season is Mr. Adams Ibrahim Adebola otherwise known as V.J Adams, a Nigerian video Jockey, Television presenter, Entrepreneur, Musician and Executive producer. He is so delighted to work with De9jaspirit talent hunt in season 2. VJ Adams believes he is a motivation to everyone out there to do more, thus, he is bringing motivation and good vibes to the show, stay tuned.

De9jaspirit Talent Hunt employs a panel of four judges who will help critique performances while grooming the contestants for the global stage.

These judges include; Iniobong Edo Ekim, also known as Ini Edo, Is a renowned Nigerian actress and film maker, who has featured in more than 100 movies since her debut. She Graced the first season of DTH as a Judge and has taken up the mantle to be amongst the Judges in season two. Having gotten a satisfying and fulfilling feeling from season one, Her expectations for the new season is a more engaging show with greater talents and hopes to be blown away. she believes it’s going to be a refreshing experience yet again.

Actor Ikechukwu Mitchel Ogbonna, commonly known by his stage name IK Ogbonna is a super talented TV and film actor. He is also a director, model and TV personality. He was privileged to be part of season one as a judge and testifies that the show was amazing and unique. He is very delighted to be part of the second edition. He also appreciates the concept of different talents on board and urges every Contestant to come with their A game cause the talents that are coming are no joke and there’s no sentiment. It is either you have it or you don’t.

Also featuring is Sidney Onoriode Esiri best known by his stage name Dr. Sid is a singer, Songwriter, Recording artiste, Stage performer, Dentist, Entrepreneur and Philanthropist. He has earned numerous awards, fame and recognition across the continent. He was an awesome judge in the Previous Season and he is back to do more. He expects nothing less than the best and encourages the next set of contestants to work hard and be spontaneous. 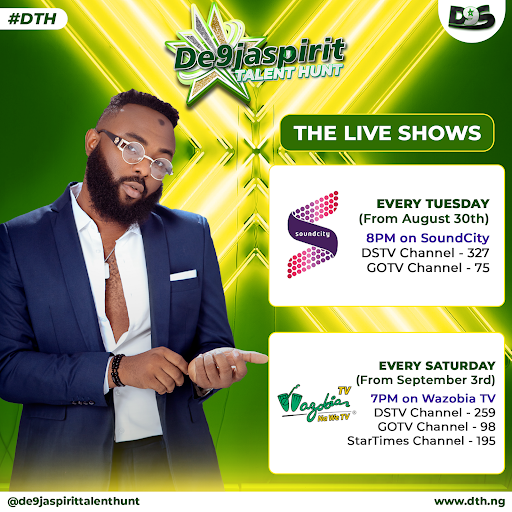 Last but not least, DTH’s Newest judge Roseline Omokhoa Afije also known as Liquorose, the 1st runner up of BBNaija season 6 tagged “shine ya eyes” is a woman of many talents built into skills.

She is a choreographer, Creative dance-craft lady, Entertainer, Model, brand Ambassador, Writer and a Video Vixen. She is excited to be a part of the show. She said “Last year was huge so my expectations are high. I Hope to see more guitarist, magicians, dancers, actors and many unforeseen talents. My ears are open to listen, My eyes are open to see, my soul is open to relate to poems and spoken words and many wonderful Talents out there”.

The second Edition of the show is coming with New, exciting twists and turns especially in a time where the Nigerian Entertainment Industry continues to grow in leaps and bounds. Our sole aim is to continually provide a platform with international relevance for more talents and prepare them for the global stage. We are set to deliver a season like never seen before.