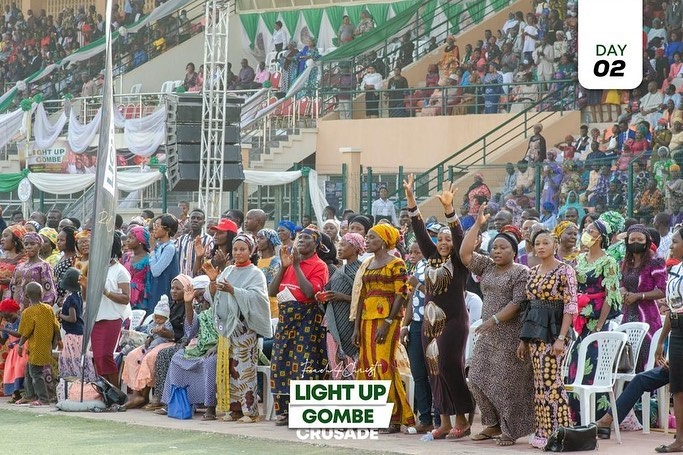 The unrelenting effort of the Gombe State Government under the leadership of Governor Muhammadu Inuwa Yahaya towards maintaining peace and tranquility in the state has once again paid off and reinforced the much taunted Gombe as a cosmopolitan state where all men and women of goodwill, good conscience are welcome for the social, economic and spiritual benefits of all.

It was the 19th century German Philosopher, Karl Marx who once described religion as the opium of the masses. Essentially, Karl Marx gave this assertion after observing that like opium, religion can be exploited for the good, the bad and the ugly. No doubt, the above position of the German philosopher aptly gave credence to, and reinforces the continuous manipulation of religion across many societies of the world, Nigeria inclusive.

As a matter of fact, to say that Nigeria has not suffered social, economic and psychological damages due to the needless manipulation of religion is to argue vehemently against the compatibility of half a dozen and six. From North to South, East to West, at least one out of a handful of Nigerians have got an unpleasant story to tell about the after-effects of the manipulation of religion. Being in the North, Gombe is not completely immune from the clutches of religious manipulation.

However historical memories reveal that despite the highly sensitive and inflammable nature of religion in the country, the perception of the citizens of Gombe and by extension the entire state regarding religious tolerance is moderately liberal. This religious tolerance played out when the Christian Association of Nigeria, CAN, in conjunction with the Pentecostal Fellowship of Nigeria, PFN, Gombe State chapters organised a two-day mega crusade tagged “Light Up Gombe”.

The purpose of the crusade was to pray for God’s mercy on the country and to commemorate the 80th birthday of a renowned gospel preacher and the General Overseer (GO) of the Redeemed Christian Church Of God, RCCG, Pastor Enoch A. Adeboye. Christians from within and outside Gombe besieged the Pantami township stadium, Gombe to listen to thought-provoking and soul piercing sermons from Pastor Paul Enenche of Dunamis Church, Prophet Isa El-Buba of the El- Buba Outreach Ministries and the General Overseer of the Redeemed Christian Church of God, Pastor E.A. Adeboye. On a general note, the clergymen were unanimous in their calls on Christians to cultivate and maintain a prayerful life especially at a time when the nation is grappling with numerous challenges.

However, Pastor E.A. Adeboye prophesied that the glory of the troubled North East sub-region shall be restored. He equally has this prayer for the Gombe State Governor, Muhammadu Inuwa Yahaya. “For the Governor of Gombe State, I pray that it shall be well with him and his government”. Though short as it may sound, such is the kind of powerful prayer every person, let alone a government will need, particularly in a complicated society such as ours.

The peaceful atmosphere that enveloped the two days Light Up Gombe Crusade was not achieved overnight but through a long term systematic plan and processes engineered by Governor Inuwa Yahaya. One of such strategies was the establishment of the Ministry of Internal Security and Ethical Orientation alongside other numerous physical and moral support aimed at boosting security network and apparatus in the state and guaranteeing peace, law and order.

Overtime, the idea of when to worship, how to worship and where to worship have brought about suspicion, acrimony and animosity especially between the two major faiths of Islam and Christianity in the state.

Governor Muhammadu Inuwa Yahaya, had while receiving the man of God on a courtesy visit, noted that it is the prayers of clerics such as the General Overseer of the Redeemed Christian Church of God, Pastor Enoch Adeboye and others that have been sustaining Nigeria.

He thanked the pastor for choosing Gombe as one of the states to visit for his reach-out campaign.

Represented by the Deputy Governor, Mr. Manassah Jatau, Governor Inuwa said, “With the rate at which Nigeria is filled with misfortunes of insecurity, economic hardships, one can only believe that it is the prayers of the people like Pastor Adeboye and other men of God that are sustaining the nation.

“Prayers can never be enough; we solicit more prayers towards sustainable peace, unity and progress of our dear state and country,” he added.

Indeed, the peaceful, harmonious and warm welcoming atmosphere that greeted the two days Light Up Gombe crusade was incredible and an indication that Nigerians can co-habit together irrespective of their religious affiliations.

At the moment, Gombe has been described as one of the most peaceful states in the country as it recorded zero crime rate in the month of January amid critical security indices according to a report by Eons Intelligence, a media, strategic intelligence and advisory group, in its January analysis of crimes, political, economic risks and opportunities in Nigeria.

The unrelenting effort of the Gombe State Government under the leadership of Governor Muhammadu Inuwa Yahaya towards maintaining peace and tranquility in the state has once again paid off and reinforced the much taunted Gombe as a cosmopolitan state where all men and women of goodwill, good conscience are welcome for the social, economic and spiritual benefits of all.