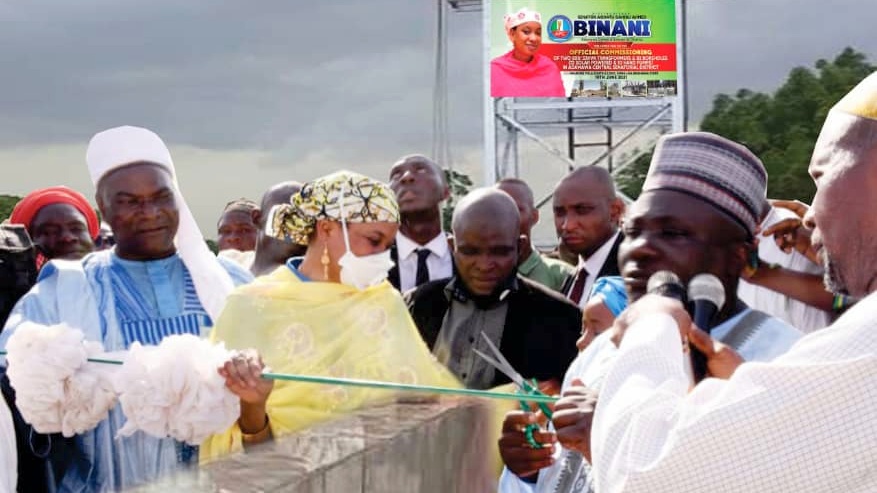 Senator Binani says water and electricity facilities are the things her people need most.

In line with her campaign promises, Senator Aishatu Ahmed (Binani) has commissioned 82 boreholes and two transformers for her constituents in Adamawa Central Senatorial District.

Binani, who is the only female Senator from the North, said the boreholes comprise 72 solar powered and 10 motorized hand pump boreholes, while the transformers are of 500/32 KVA capacity each.

Commissioning some of the boreholes and transformers in Ngurore in Yola South Local Government Area (LGA) and Song in Song LGA, Senator Binani said the welfare of the people of her senatorial district will remain her topmost priority.

“All these projects are in fulfillment of my campaign promises to address the basic needs of my people and my district.”

In Ngurore where her commissioning tour started, she said the community, a large settlement along the busy Numan-Yola highway, had not had electricity for three months due to lack of transformer.

“The two transformers of 500/33KVA being commissioned in the two locations of Ngurore Ward, which sadly remained without electricity for about three months, will definitely provide relief to our people,” Binani said.

She assured that electricity supply would improve security in the town and promote small-scale businesses in the community to enable the people to be gainfully engaged.

Senator Binani said water and electricity facilities are the things her people need most urgently from their representatives and that she would at all times be mindful of her people’s needs.

“I assure the people of Adamawa Central Senatorial District, and indeed the whole of Adamawa State, that our people’s welfare, well-being and interest will ever remain topmost priority in all my engagements in the Senate and in my politics,” she said.

The Chairman of the projects commissioning ceremony, Alh. Ibrahim Bilal, who is also the Caretaker chairman of All Progressives Congress (APC) in Adamawa State, said Senator Binani had done her part by bringing the facilities.

He urged benefiting communities to guard the projects against vandals.