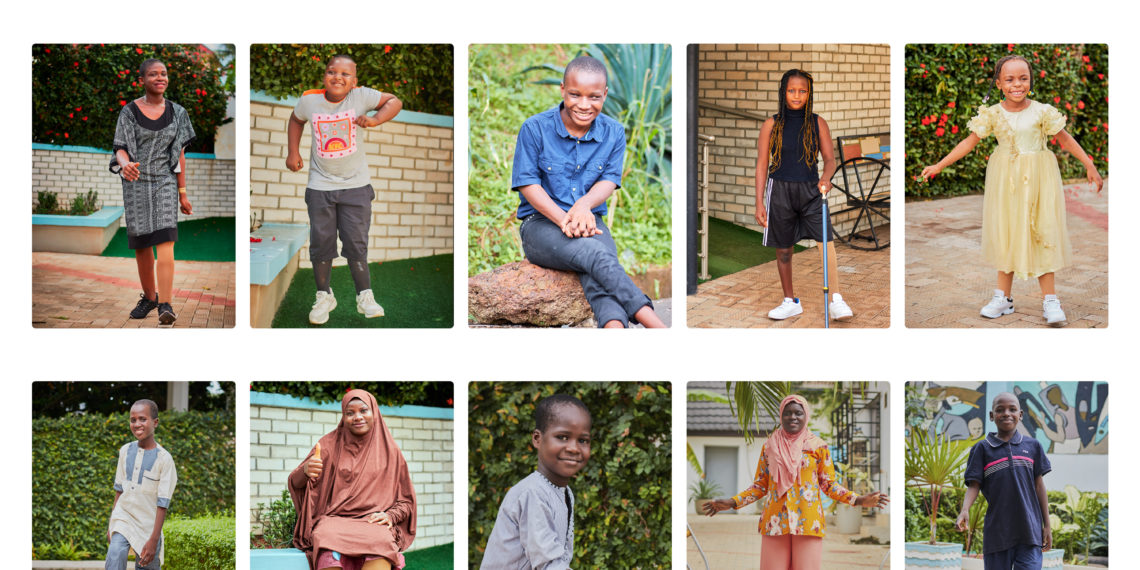 Stanbic IBTC's 'Together for a Limp'

How Stanbic IBTC’s ‘Together for a Limb’ is touching lives

Through the initiative, Stanbic IBTC identifies children suffering from limb losses and provides them with prostheses.

And help came from unexpected quarters.

There are many sad young lives yearning to be touched, no matter how little, to dare to dream and believe again. For the lucky few who found that help, the transformation could be as astonishing as it is gratifying.

For 14-year-old Chidinma Udeh, eight-year-old Emmanuella Offor and 13-year-old Qoyyumat Okesanjo who have had to endure limitations in movement due to missing limbs and were in desperate need to live normal lives, help finally came through Stanbic IBTC’s Together4ALimb CSI initiative.

It was a similar story for Aisha Gidare from Jigawa, Hamza Ahmed Rufai from Katsina, Nasirdeen Rabi’u from Zamfara, Anabel Ayuba from Plateau, Yakubu Haruna from Kano, Covenant Sunday Okon from Akwa-Ibom and David Ahmed Aliyu from Zamfara; who were the 2020 beneficiaries of the novel interventionist programme.

These young Nigerians all have missing limbs, either through birth defects or accidents. Some of them have been victims of stigmatisation and suffer low self-esteem as a result. Their hopes of living normal lives were almost dashed until help came along from Stanbic IBTC.

Little Emmanuella Offor’s condition was so bad that her mother, Happiness Offor, almost abandoned her, but had a last-minute rethink. “I wanted to throw away my baby in the dustbin. I put a wrapper in the dustbin and laid my daughter there. But as I was about to leave, Emmanuella asked me:
“Mummy, are you going to leave me here?” recounted Mrs Offor.

She said at the point when she resolved to throw away Emmanuella, she was already physically, emotionally, and financially drained. The mother of five said she had lost everything trying to get a solution to her daughter’s problem: her business, her savings, her home, her peace of mind, her joy, everything.

“Along the way, I lost hope. I lost everything, my business, my money, and my father’s money were all gone. I had to relocate to my village,” she said.

Emmanuella, according to her mother, was born normal. But a month after birth, she developed convulsive and coughing spells that required medical attention. However, after the initial treatment, other complications developed that led to Emmanuella eventually losing both her legs.

Chidinma said she was eight years old when her leg was amputated. The 14-year-old recounted that her mother told her she was born with one of her legs much bigger than the other one, which forced the amputation.

“I grew up and saw myself without one leg. It was my mummy that told me that when I was small, one of my legs was bigger than the other, which was why they cut it,” Chidinma said.

Because of the loss, Chidinma went through a torrid time. She was perpetually on crutches and couldn’t do what other kids her age were doing.

She was discriminated against and repeatedly made to feel left out. “During sports time in school, while other students go out to play, my teachers will tell me to stay back because of my leg and crutches,” she said. “At home, my mother will not allow me to do anything. She only assigned duties to my brothers. And in the church, I couldn’t join my mates to play. I couldn’t do anything in the school, at home and even in the church.”

Chidinma, who loves to dance, lost her joy and became withdrawn. But then hope came in the form of a prosthetic limb from Stanbic IBTC to replace her crutches.

Stories like Emmanuella’s and Chidinma’s are prevalent across the country. It is estimated that about 23 million Nigerians, mostly children and young adults, are without limbs; and this figure continues to grow steadily.

Many of these limbless Nigerians are stigmatised and discriminated against and have no voice. It was in a bid to draw attention to the plight of limbless Nigerians while also providing succour that Stanbic IBTC chose to adopt Together4ALimb as its flagship corporate social investment initiative.

Through the initiative, Stanbic IBTC identifies children suffering from limb losses and provides them with prostheses. Together4ALimb focuses on transforming the lives of children with limb losses from congenital issues/birth defects, accidents or mismanaged injuries. Such children are given prosthetic limbs.

The organisation also incorporated an education trust element to the initiative in line with the financial institution’s three cardinal CSI objectives which are health, education and economic empowerment so that the beneficiaries have access to quality education. This effectively addresses both their health and education needs.

“The rehabilitation of those who have lost their limbs, by providing them with prosthetics, will positively impact their self-esteem and mobility, which will ultimately positively affect their quality of life,” Demola Sogunle, Chief Executive, Stanbic IBTC Holdings PLC, said.

Since 2015, Stanbic IBTC has been organising annual charity walks to raise awareness about this plight to encourage policymakers, government, other stakeholders and the public to proffer solutions to the problem.

The charity walk helps to define Stanbic IBTC’s social responsiveness and its desire to direct attention to important societal issues. The twin tactics of health and education for the children address both their bodies and their minds in a way that benefits the children as well as the society.

The charity walk has attracted thousands of participants that cut across government, policymakers, business leaders, and other Nigerians. No doubt, Stanbic IBTC’s footprints across the country and financial industry positions it well to make an appreciable impact in awakening the mass consciousness required to tackle the limbless menace head-on.

Initiatives like Stanbic IBTC’s Together4ALimb have a way of touching lives in most unexpected ways. For Mrs Offor, Stanbic IBTC has given her a lifetime experience she never dreamt of. “Look at Emmanuella that I lost all hope on; that I planned to throw away. It is that same Emmanuella that brought me to the airport; that is making me board a plane and travel by air,” said Mrs Offor.

Stanbic IBTC can take pride in the fact that its goal of ensuring that these children can function independently and perform certain tasks – which they hitherto could not engage in due to their condition – is realised. “Now I can dance, I can jump, and can run to welcome my mummy home. I can do everything. Even if you (the mother) ask me to fetch water for you when you want to bathe, I can do that,” gushed a visibly joyful Chidinma, after she was fitted with a prosthetic leg.

Stanbic IBTC has provided prosthetics and Educational Trust valued at over N250,000,000 for 40 children aged five and above since the initiative commenced in 2015. The prosthetics are replaced annually until the beneficiaries turn 18.