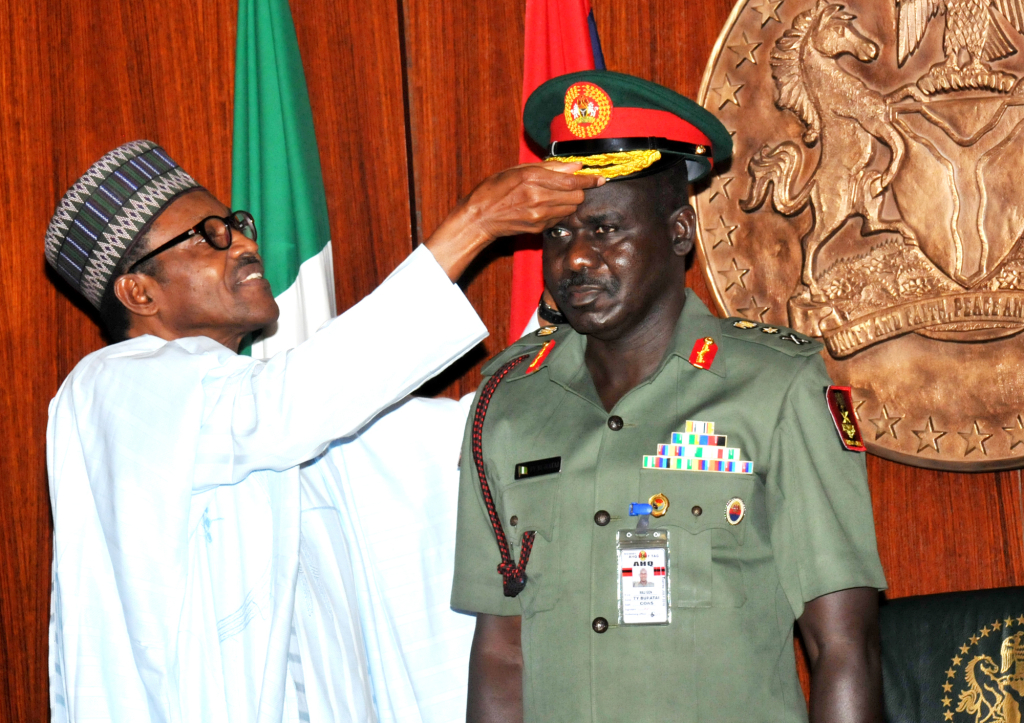 President Muhammadu Buhari Decorating The Chief Of Army Staff, Maj.-Gen. Tukur Buratai With His New Rank Cap Of Lt.-Gen, At The Presidential Villa In Abuja On Thursday (13/8/15) | NAN

Albinawi, Tukur Buratai, and a smear campaign taken too far

The agents of provocation, harassment and sponsors of inertia in Nigeria are at it again.

This time, they want to hoodwink undiscerning Nigerians and sell the garbage that the success of the Nigerian Army, under the selfless Chief of Army Staff Lt. Gen. Tukur Buratai, is a fluke. Yet, in all honesty, how can the man achieve such gargantuan and incisive victory over the insurgency menace, if he was not upright.

What is clear from the contraption of one Harun Elbinawi is that the piece was packaged to sooth the ego of our enemies of progress, who detest any good coming Nigerian’s way.

But they are dead wrong, as Nigerians can no longer be fooled by such antics.

These people always seek means of destroying our efforts to build a united, egalitarian and progressive nation. They always cook up fables, lies and half-truths and to thwart meaningful programmes in Nigeria.

The veil of the contraption would fall apart when one critically views the caption of the write-up by insinuating a linkage of two issues, totally at variance. This portends that same source is bankrolling the hatchet job.

In the craze to paint Lt Gen. Buratai in the worst of colours, they tagged him (with all manner of derogatory names) a “Butcher” and a “Boko Haram facilitator” while even the crassly-informed is aware that Lt. Gen. Tukur Buratai devoted the total means at his disposal to wage the anti-insurgency war to record the successes on ground.

He succeeded where many had failed us. He has lived up to expectation and within one year, a stable peace is gradually coming to the affected zone.

The piece, for want (lack) of anything worthwhile to hang on the unblemished officer, (and Spartan General), tried to use religious sentiment to stir emotions and attract sympathy to their cause by blackmailing the Federal Government into removing their albatross.

What is shocking and unimaginable, is how some Nigerians still think they can use bogey schemes to cause chaos in our public (national) life, just to serve their nefarious interests and with scant regard to the damage such could inflict on the perception of our people and government by foreigners.

It is totally unpatriotic and absurd to go to any length to destroy what our forefathers fought so hard to leave as a legacy for us, simply because certain events did not happen as they anticipated and calculated.

The write-up was tardy and unpolished, reflecting a lot of conflict of thoughts and mix-ups in their minds, and rendering their arguments incoherent.

The point we want to make here is that any attack on Lt. Gen Tukur Buratai, citing what happened in Zaria that has been a subject of investigation and probe or his personal estate which he fully disclosed to the authorities and found to be within his legitimate earnings, can only but be a guise to undermine the President Buhari administration.

The source of this tirade is not too hard to pinpoint. The baseless accusations on account of how the Nigerian Army thwarted a planned affront to rubbish its bravado, and the pretence to whistle-blowing and shameless fabrication and distortion of facts (as if the readers are all uninformed) is to say the least the handiwork of a demented group, whose grudge is incurable, just as their thirst for bloodletting is unquenchable.

The present government no doubt must have incurred the wrath of many, who had been feeding fat on the misuse of public funds to pursue self-serving goals and interests detrimental to our nation and its people. So, we are not in any way alarmed at the extent of their self delusion.

The account of how the COAS purportedly used Army funds to purchase properties in Dubai or acquire same in Nigeria did not add up, simply because it is not true. How can any sane person imagine that General Buratai as commander of the Multi-National Joint Task Force on insurgency, could short-change in procurement of equipment like vehicles and motorcycles as claimed, whereas such matters are done strictly in accordance with laid down procedures of the international agencies mandated by the funding countries.

To vividly demonstrate their dishonesty and love of falsehood, they alleged that the COAS and his two wives paid about $419,000 for a property in Dubai in 2013, then shamelessly claimed sources in the Army said the money involved came from the contract awarded for the supply of vehicles and motorcycles.

These are mere conjectures, as the COAS was never a Director of Procurement at the Army Headquarters. In fact it was to his credit that the Army now has one. Contrary to the insinuation, he was the one that created the Procurement for the Nigerian Army on assumption of duty as Chief of Army Staff last year as part of the far-reaching re-organization he initiated on assumption of office in July 2015.

Suggestions that the COAS tampered with public funds are therefore hollow, inane and mischievous. Such misinformation are the favourite pastime of a people who detest Nigeria’s progress with passion. They are the same elements funding all sorts of anti-people ploys in Nigeria, using diverse means of disguise but whose main objectives is to fan embers of hatred, stoke inter-ethnic conflicts, create intra-community discord and pursue inordinate faith-based agenda all in a bid to either have their way of muzzling government or instigate a disintegration of our beloved father-land. May Allah forbid.

On Lt. General Buratai’s appointment on July 13 last year, there was spontaneous celebration in all Army formations, because all and sundry attested that President Muhammadu Buhari indeed made a wise choice of putting an impeccable and astute officer to direct the affairs of the Nigerian Army at a very critical time.

True to their attestation, Nigerians from all nooks and corners of our great country expressed confidence in him and the manner he transformed our Army into a potent strike force, well motivated and able to hold its own in protecting our territorial integrity.

He restored respect and dignity to soldiering.

We advise all patriotic Nigerians to ignore divisive and seditious elements whose agenda is to do us in. The country can only develop, survive and flourish if as citizens we put the genuine interests of the nation first and above parochial interests.

It is ludicruous to expect elements from Mars to come and rule us, or become subservient to other nations as Albinawi and his co-travellers want us to. We cannot make headway in our affairs if we continue to disparage even individuals who have demonstrated rare and uncommon commitment to sort out our problems.

It is our believe that it is inappropriate to impugn the integrity of the Nigerian Army over the false and baseless allegations against its chief.

Gen. Buratai has the right to own property anywhere, so long as the sources of such investment are found to be legitimate. It is ridiculous computing the earnings of an officer commissioned some 33 years ago, as if his investments must remain static, where the person can only deplete such but not use same to add value as being insinuated.

The picture is clear. These agents of retrogression have been having it rosy in Nigeria. Due to a sudden twist of fate, they havecnow found themselves holding the short end of the stick and are bent on subverting this government by all means.

What is mind boggling is how they expect Nigerians to be so easily deceived again, after passing through hell in the hands of those saddled with leadership positions but who ended up plunging us into monumental disaster and misfortune.

If there is any iota of truth in the allegations against Lt. Gen. Buratai, he would not have been absolved of wrongdoing in the infamous Dasuki-Arms deal scam. All those holding sway during the previous regimevwere implicated in that scam.

Nigeria has suffered enough in the hands of its detractors, who feel the country should not come out of the woods. So the game plan is to use whatever means to put a spanner in the works, and this nefarious ploy is to railroad or force President Buhari to firevthe COAS in order to halt the momentum being gained in quelling the insurgency on the one part, and on the other hand portray him as a weak leader who can stab his staunch lieutenants in the back after using them to achieve set objectives.

Little did they reckon with the vibrancy of a Presidency blessed with a mindset to focus on solving the problems of the country and refusing to be swayed by the subterfuge, innuendoes and charade of the dislodged bunch, who mean evil for the nation and would stop at nothing to achieve their selfish retrogressive agenda.

In the light of the foregoing, we wish to use this medium to implore Nigerians to discountenance such blatant lies from self-serving elements like Harun Elbinawi and his ilk, whose paymasters are now left in the lurch, after wrecking our economy, leaving the ordinary Nigerians in the throes of extinction and yet abhor the current measures being taken by the Buhari administration to put it back on track.

The objective of the onslaught is beyond Lt. Gen. Tukur Buratai. Rather the COAS is being witchhunted for daring the hitherto sacred cows and spoiling their fun. They want to ultimately undermine the Buhari administration’s plans to put the country on the path of irreversible development.

We therefore see this senseless ploy by the enemy as a potent affront on our psyche, where our detractors would want to take the wind out of our sail. Nigerians must as a people stoutly resist such elements whereever they rear their heads.

We should be extra alert as they would devise diverse ways to pursue their inglorious schemes, but we should not be disillusioned, taking comfort in the fact that posterity would always be on the side of the just.

Lt. Gen. Tukur Buratai has served this country diligently and brought a sigh of relief to millions of Nigerian families. The least he deserves is a pat on the back for a job well done, not being maligned and blackmailed for refusing to serve the selfish interest of a despicable lot.

The COAS is a professional to the core, an astute officer who has immensely taken thevwelfare of his soldiers to an all time high, thus raising their morale to accomplish so much, within his brief stint.

While we are not in a position to hold brief for Gen. Buratai, as discerning analysts of Nigeria’s public affairs, it would amount to being unpatriotic to keep mute, while this doyen of the military is being unjustly accused for daring to serve our common interest to the best of his ability, hence this rejoinder to the likes of Harun Elbinawi.

Albinawi, Tukur Buratai, and a smear campaign taken too far