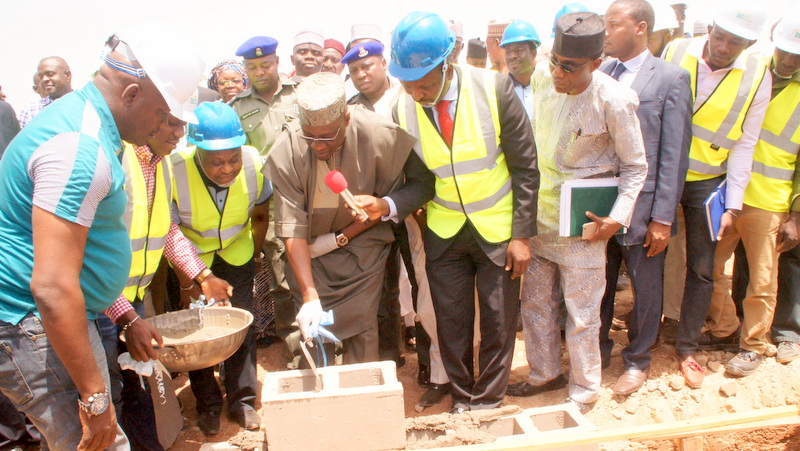 Kwara State Governor, Dr.Abdulfatah Ahmed laying the foundation for the HUB, a landmark ultra-modern shopping and office complex in Ilorin

Under the leadership of Governor Abdulfatah Ahmed, Kwara State has experienced growth and development across all sectors. In these years, the Ahmed-led administration garnered immense acclaim for its strong determination to ensure even development in all sector.

From roads, water, to agriculture, health, housing and education, the present administration has recorded giant strides in Kwara state.

Listed below are some of the achievements recorded across some key sectors in Kwara state.

The works and transport sector in Kwara State continues to receive priority attention under Governor Abdulfatah Ahmed’s administration, especially with regards to completion of inherited and new road projects.

In furtherance of his intention to construct more roads, Governor Ahmed in February 2016 approved the payment of N2.4b to contractors in charge of over 35 road projects across the State.

In other to improve inter and intra state transportation, the State Government, through its agency, Harmony Holdings Limited, procured 42 new buses for the State Transport Corporation, now called Harmony Express.

Water supply has improved significantly in the state since the inception of the Alhaji Ahmed-led administration with significant reduction in accessibility gap.

For instance, at the Asa Dam water works, Ilorin, production increased from 4mgpd to 25.5mgpd, and has been sustained since its expansion.

In the face of increasing population particularly in Ilorin, the State Capital, the government has adopted a phase-by-phase approach to rehabilitate its existing 94 waterworks.

Within the space of five years, hundreds of motorised and hand pump boreholes have been drilled, and distributed across the three senatorial districts to achieve equitable spread.

Also, the on-going Ilorin Reticulation Project is expected to be completed this year.

As part of his bold measures to close the supply gap for housing in the state, Alhaji Abdulfatah Ahmed in March 2016, flagged off the construction of 1,000 housing units at Budo-Osho Area, Tanke Ilorin, a pilot scheme under his strategic housing deficit intervention.

The 1,000 housing units designed to provide quality and affordable shelters for low and middle class workers, will be a 700 three-bedroom flats and 300 two-bedroom flats.

Also in March, Governor Ahmed performed the ground-breaking foundation laying ceremony for the construction of an ultramodern shopping and office complex, named The Hub.

The Hub, when completed is expected to transform the landscape of Ilorin, create employment opportunities, stimulate commerce, facilitate and attract new investments, boost the economic growth and ultimately enhance Internal Revenue of the State.

One of KAMP’s main strategies was development of the agriculture value chain development in rice, soya, cassava and rice.

Under its Off-taker Demand-Driven Agricultural Activities (ODDA), the Ahmed administration disbursed N214 million to 172 lead farmers for improved mechanised farming across the state.

Furthermore, the Kwara Agro Mall (KWAMALL), which provides loan facilities, subsidies, consultation and equipment to farmers, was established in Ilorin. The centre bridges the gap between farmers and consumers by linking farmers with off-takers. Hundreds of farmers spread across the State have benefited from the activities of KWAMALL which will help to position Kwara State for sustainable agro-development.

In the face of the dwindling allocations from the Federal Government, occasioned by the persistent drop in oil prices globally, Governor Ahmed in June 2015, signed into law the bill establishing the Kwara State Internal Revenue Service (KWIRS).

KWIRS is empowered to mobilize revenue, block leakages and expand the State’s revenue base so that the government can meet its obligations to the people. Consequently, the revenue service has been making appreciable progress in revenue generation since it commenced operations in January.

In keeping with that mandate, KWIRS generated N3.2b in the first quarter of 2016. This is a significant improvement compared to about N7.5b generated in 2015 by the State Government.

As part of efforts to ensure transparency, accountability and address the challenges associated with the operation of multiple account system in government’s revenue inflows, Governor Ahmed introduced the Treasury Single Account (TSA) for all revenue generating agencies in the State to ensure efficiency in collection and disbursement.

As part of contributions to the development of the education sector, Governor Abdulfatah Ahmed constructed and rehabilitated 400 block of classrooms at primary and secondary school levels. His administration introduced free tuition and notebooks at senior secondary school level. To expand access to tertiary education in the state, Dr. Ahmed also approved the reduction in the tuition fees for Kwara State University (KWASU) students by 30 per cent.

Dr. Abdulfatah Ahmed also commenced the construction of an N800m Engineering complex for the Kwara State University, which is now near completion.

The innovative centre which is in partnership with City and Guilds, London, is aimed at creating a generation of highly employable artisans and prosperous youth entrepreneurs through the provision of market relevant skills under its Shared Prosperity Programme.

Governor Ahmed completed several projects in the power sector across the state in a bid to improve power supply. Some of these include, Iponrin, Sekun-Owode and Bokungi-Jambufu Electrification Projects in 2011.

From the inception of the present administration, a tremendous transformation has been recorded in the Health Sector in Kwara State under the able Leadership of Governor Ahmed. One of the major thrusts of his administration is the provision of quality and affordable health care for the people within 500M radius, an intention he has pursued with tenacity.

The Community Health Insurance Scheme (CHIS), under which enrolees receive all-year round healthcare for a paltry sum of N500, has been extended to 110, 000 beneficiaries and adjudged as one of the most successful by the United Nations (UN). The programme is targeted to reach one million rural dwellers before the end of 2018.

In the same vein, medical equipment was distributed to all Government Hospitals as well as MDG equipment to 13 General Hospitals and 43 primary health care centers across the state.

In 2014, five General Hospitals in Share, Omu-Aran, Offa and Kaiama, were renovated and equipped with state-of-the-art-facilities.

As part of measures to improve security, Governor Ahmed presented Patrol vehicles to Kwara State Police command in 2011 and 2012, and launched Operation Harmony in 2013 to strengthen security across the state.

As part of efforts to check the menace of cultism, the State House of Assembly has passed the new Secret Cults and Society Prohibition Bill 2016. The new law equally outlawed cultism establishment, commission, existence, membership and activities of secret cults and societies in both academic and non-academic environments in the state.

Small and Medium Enterprises (SMEs) are critical to the economic development of any country as they have the potential to create employment opportunities, generate revenues, improve local technology and ensure forward integration with large-scale industries to ensure sustainable socio-economic development and prosperity.

Also in 2012, Governor Ahmed launched the Kwara Micro Credit Intervention Scheme to encourage and assist small and medium scale enterprises in the State.

An initial sum of N250 million was approved by Governor Ahmed to kick start the scheme but has grown to about N1.597 billion with a total of about 1,848 cooperative societies and 50, 000 small businesses benefiting.

Additionally, 53 associations under the aegis of Artisan Congress of Kwara State have benefited from the scheme, and about 150 taxis, 25 buses and 193 motorcycles has been given out to beneficiaries across the state.

The government of Dr. Abdulfatah Ahmed has also recorded giant strides in grassroots infrastructure development with the recent approval of N850m for the implementation of critical grassroots projects in 192 wards across the State.

The initiative which is a collaboration with the World Bank, will focus projects on roads, education, health, energy and water supply, and will be purely community-driven.

In reaffirming his commitment to promoting the growth and development of the aviation industry in Kwara State, Governor Abdulfatah Ahmed flagged-off Helicopter training at the International Aviation College, Ilorin in partnership with the Nigerian Navy, making it the first in West Africa to provide fixed and rotor wing training.

This is aimed at achieving its much desired objective of being a one-stop aviation training institution, which will further showcase Kwara as an aviation hub in Nigeria.

The presence of an Air force hanger in Ilorin and the Nigerian Navy’s plans to set up a training wing in the State gives credence to Kwara’s position as an emerging aviation hub in the country.