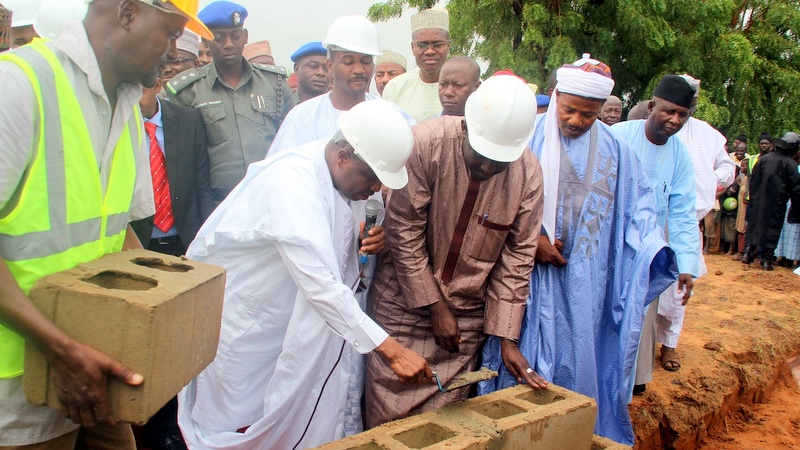 1 Number of Special Adviser appointed by Governor Aminu Waziri Tambuwal since he came on board on May 29, 2015. This is part of cost-saving measure adopted by government considering the nation’s precarious economic situation.

3 Micro-Finance banks to be established by the State in the three senatorial districts of the state. All paper works have been completed.

4 Communities where the state contributory health scheme has taken off. The communities are Gagi, Shinaka, Rimawa and Sire.

6 Hospitals approved for upgrading to premier health facilities in various parts of the state. Some of these projects include repairs and renovations of the Maternity Unit of State Specialist Hospital, Sokoto and General Hospitals of Tangaza, Illela and Wurno, completion of the second phase of the Murtala Muhammad Specialist Hospital, comprising of 47 staff houses, two wards and landscaping. Conversion of Amanawa Leprosarium into Infectious Diseases Hospital, and the conversion MMSH into a Renal and Cardiac Centre.

22 Number of major projects inherited from previous administration and funds provided for their completion. They include projects in housing, energy and power (State IPP), roads, health, rural and community development, agriculture, water resources, mining and building of office accommodation for civil servants and other public workers eg legislators.

25 Number of International Development Partners attracted to Sokoto to work in the health sector.

300 Civil Servants who benefitted from Home renovation loan guaranteed by the government, and expended through the Federal Mortgage Bank of Nigeria (FMBN).

500 Units of houses at Kalambaina and Gidan Man Ada inherited from the previous administration and funds provided for their completion.

500 New junior and mid-cadre staff employed into the state civil service. They include drivers, messengers, mechanics and other clerical/administrative officers.

1000 New millionaires created in Sokoto after the payment of retirement benefits to 1907 pensioners.

8,000 Sokoto students who benefitted from Government’s free JAMB forms ahead of the 2016 joint admissions and matriculations board unified tertiary institutions adminission examinations.

6,500 Epilepsy and psychiatric patients who received free medication from government. They were drawn from 65 wards in the 23 local government areas of Sokoto state.

9,000 Tonnes of fertilizer bought and sold to farmers at subsidized rate for the 2015 farming season at the cost of N1.2 billion Naira.

19,000 Estimated number of job opportunities created by the government in the last one year. They include jobs in the civil service, agricultural sector, mining sector and the introduction of the new Primary Healthcare Under-One-Roof policy. All health workers in ministries and agencies working in the local government areas have been absorbed into the state Primary healthcare Development Agency.

N40,000 Money paid to each of the 575 extremely poor beneficiaries under the conditional cash transfer scheme in Illela LGA.

100,000 Tonnes of fertiliser to be produced by the new Ferrtiliser Company to be established in Sokoto by Prime Gold Fertiliser Company. An MoU has already been signed to that effect. 5,000 job opportunities will be created by the company.

N500,000 Money given to each family of the 138 hajj stampede victims. A breakdown of the number showed that 114 pilgrims were confirmed dead, 22 missing and two injured but were later treated and discharged.

$250m Total money to be expended for the establishment of a Tomato Processing Factory by Erisco Foods Limited in Sokoto. An MoU has already been signed while land for the project has been handed over to the company by the Government.

N874.9m Total funds released as counterpart funding for intervention in health along with Dangote Foundation and Bill/Melinda Gates Foundation.

1,000,000 Children immunised from measles and other child killer diseases in Sokoto in February 2016.

1,193,760 Enrolled pupils/students in the Basic Education Schools for the 2015/2016 academic session in Sokoto State.

N10,000,000 Expended monthly to provide free drugs to patients in hospitals and other health facilities in Sokoto.

N33,500,000 Expended every month by the Zakat and Endowment Committee for the payment of N6,500 monthly stipends to under-privileged members of the society as part of government’s initiative to tackle extreme poverty.

N1,000,000,000 Expended in the payment of tuition/living expenses to our students studying in various disciplines across the globe. Presently, Sokoto has over 342 foreign students under FULL sponsorship by the Sokoto State Government and we have also have over 17,000 students studying various courses in Institutions of higher learning, within the country.

N1,194,741,000 Appropriated for the establishment of a Boarding Secondary School in Gudu LGA. The school will improve enrolment, retention and transition of pupils from Primary to Secondary Schools in the Local Government and its neighbours, such as Tangaza and Illela.

N1,660,000,000 Funds expended in  the provision of water pumps, seedlings, drilling tube wells and other agricultural machineries for farmers.

N2,000,000,000 Money set aside by Sokoto State Government and the Bank of Industry (BoI) as intervention funds for the development of micro, small and medium scale enterprises in the state.

N2,000,000,000 Another N2 billion set aside for intervention in social sectors for the implementation of UNICEF’s 2016 Work Plan in Sokoto. The sectors are education, health, environment, sanitation and nutrition.

N3,300,000,000 Investment attracted to the state through the Niger Delta Power Holding Company for expansion of critical infrastructure in the power sector.

Enyimba on a roll, Hamilton celebrates and other sporting things we saw last week

TITLE: Natural Gas: how high can the price go?