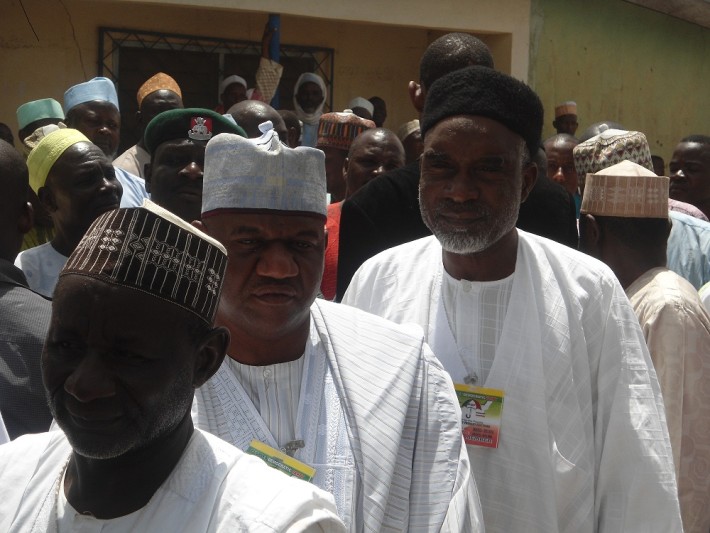 Mr. Nyako queues to vote at the congress

Protests have  trailed the Peoples Democratic Party’s ward congresses, held across Adamawa State over the weekend, with one of Governor Murtala Nyako’s political rival, Umar Ardo,  alleging that the process was skewed against other stakeholders in the state chapter of the party.

Mr. Ardo’s petition, presented to Independent National Electoral Commission in Yola, accused the state executive of the party of stage-managing the congresses to return 99 per cent of ward executives loyal to Governor Nyako.

Party insiders say  the outcome of the congresses has allowed the governor to retain his hold on the party while diluting the influence of other top party chiefs such as ex-VP Atiku Abubakar and Bamanga Tukur, who is seeking the chairmanship of the party.

Mr. Nyako, his critics say, has also used the congresses to sideline other notable stakeholders of the party who are in disagreement with him over the composition of the party executive in the state.

Mr. Ardo, who challenged Mr. Nyako for the party’s governorship ticket nomination, and others party chiefs, had expressed displeasure over the composition of the state executive of the party, which they claim is at variance with the zoning of political offices in the state.

They have therefore been pushing aggressively  for the dissolution of the Mijinyawa Kugama-led state executive of the party in the state.

Mr. Kugama, the PDP state party chairman, who hails from the same local government with the governor, is said to share “blood ties” with him.
Mr. Ardo, in his complaints to INEC, described the ward congresses as a charade,”capable of extending the frontiers of conflict and crises” in the state.
The petitioner, who expressed frustration with the inability of the PDP leadership in Abuja to deal with the Adamawa issue, said he was taking his complaints to INEC, the independent body constitutionally empowered to monitor all elections of political parties, because he saw the commission as an impartial arbiter from which he could get justice.

He urged  the electoral body to treat his complaints dispassionately,and if found to be true, to reject the so-called results of the ward congresses held on Saturday.
He explained that last month, notable politicians from the state, including Messrs Abubakar and Tukur, Jubril Aminu, Senator Grace Bent, Senator Paul Wampana, Gen. Haladu Hananiya, Air Commodore Dan Suleiman, Gen. Aliyu Kamaa and a former governor of the defunct Gongola State, Wilberforce Juta, and himself, met with President Goodluck Jonathan to advocate for free, fair and transparent congresses.

“These results cannot be an electoral college for the purpose of electing next Saturday’s local government’s exco,” Mr. Ardo said. “Once the foundation is faulty,  no enduring structure can be built on it.”

Disputes over the ward congresses results have been reported for Numan, Madagali and Lamurde following  complaints over lists of party executives and ward delegates by stakeholders whose allegiance to the PDP leadership in the state were doubted.
However, Governor Nyako has  debunked claims that the ward congress elections were scripted, and absolved himself of intervening in party affairs as he had no annointed candidates.
He called on party members to support whoever emerges as party executives in the ward congresses and all other party elections in the weeks ahead.
The governor was sighted at the Mbila ward, among party members who queued up to vote at the ward congress elections on Saturday,monitored by our correspondent.
Meanwhile, Mr. Tukur, former Governor of  old Gongola State and the President of the Africa Business Roundtable, on Sunday officially flagged off his campaign for the office of the national chairman of the party at his Jada country home in Adamawa state.

Mr. Tukur said he was gunning for the exalted position to consolidate the country’s democracy.
But it appears Mr. Tukur will have to contend with Mr. Nyako’s seeming opposition to his candidacy.