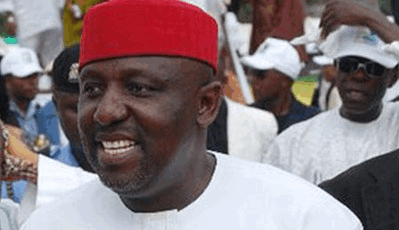 The elections of Governor Rochas Okorocha of Imo State and Emmanuel Uduaghan of Delta were Friday upheld by the Supreme Court of Nigeria.

The five man panel of the apex court headed by Justice Sylvester Nguta and Mohammed Tanko for the two appeals respectively dismissed the judgements of the Court of Appeal and affirmed that of the state election tribunals in the two states.

The two judges dismissed the appeals on the grounds that both were delivered outside the 60day window allowed by the Constitution.

Justice Nguta cited section 285 of the Nigerian Constitution as amended and held that the Court of Appeal is not competent to give a judgement on an appeal from the verdict of a tribunal outside 60 days.

He noted that though the Court of Appeal had given its judgment within the stipulated time frame, it waited too long to give reasons for the judgement.

The judge also said since a judgement and its reason is one and the same, the action of the Court of Appeal became null and void and could not stand.

He dismissed the appeal and aligned with the judgement of the state election tribunal.

Recall that Mr. Ohakim approached the election tribunal on the grounds that he (Ohakim) scored the majority of the lawful votes cast at the election held on April 26, 2011 and that the supplementary election held on the 6th of May, 2011 was invalid, being in breach of the provisions of both the Electoral Act 2010 (as amended) and the 1999 Constitution (as amended).

Recall also that Mr. Okorocha had been declared the winner of the poll after he polled 336,809 votes as against Mr. Ohakim’s 290,496 votes. The total votes polled by each of the candidates represent the cumulative votes cast on the first poll which held on April 26 and the supplementary election of May 6, 2011.

The tribunal delivered its judgment on November 12, last year and held that, “The supplementary election held on the 6th of May, 2011 was held in compliance with the provisions of the Constitution of the Federal Republic of Nigeria (as amended) and Electoral Act 2010 (as amended) and consequently the petition, on this ground, is accordingly dismissed”.

In the case of Delta State, Great Ogboru of the Democratic People’s Party (DPP),  had approached the apex court because he was dissatisfied with the ruling of the Court of Appeal sitting in Benin which dismissed his petition against the ruling of the state election tribunal that declared Mr. Uduaghan the validly elected governor of the oil-rich state.

Mr Ogboru had earlier argued  that there were irregularities in the conduct of the elections.

He said it was on the basis of that the tribunal nullified the election results for Bomadi and Burutu Local Government Areas and some units in wards across the eight local government areas, where he is challenging the results of the election.

According to him, ballot papers found in the field did not match results in form EC 8, arguing that the lower tribunal did not go far enough in nullifying such results in other areas and so Mr. Uduaghan was not elected based on majority of lawful votes cast and that he ought to have been declared winner of the election, having scored majority of lawful votes at the election.

The Court of Appeal was not convinced by the arguments canvassed by Mr. Ogboru and his lawyers. It therefore dismissed his appeal for ‘incompetence and lack of merit.’

But Friday, the Supreme Court nullified the judgement of the Court of Appeal and aligns itself with that of the tribunal because of time lapse.

Justice Mohammed, who read the lead judgement, said that the Appeal Court rightly gave judgement on the case on January 5, 2012, but waited till January 27 before giving reasons for its judgement which therefore made it a nullity because it was beyond 60 days.

“A court whose judgment is appealable must give its judgment and the reasons for it together to avoid judicial anarchy.”Mr. Mohammed said.

Mr. Ogboru spoke to the media after the judgement and called today’s ruling a ‘conspiracy against litigants’.

“The Court of Appeal and the Supreme Court know what they were doing because nothing stops the Appeal court from giving reasons for its judgement the same day it gives ruling,” he said.

He called on the National Assembly to quickly amend the constitution, particularly section 285.

On the other hand, Mr. Ohakim, through a text message sent to Premium Time, expressed disappointment in the ruling.

“Although the Supreme Court did not favour us, we had the grace of God on our side throughout the trial. We have received judgement, but not justice.”

He thanked all the people of Imo state, saying that he has “fervent hope that someday justice will prevail.”