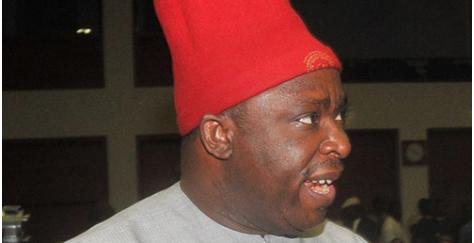 A Federal High Court sitting in Abuja, today dismissed a suit seeking an order of mandamus to compel the Independent National Electoral Commission (INEC) to recognise the Chekwas Okorie-led national officers of the All Progressive Grand Alliance (APGA).

Benjamin Duru, APGA vice national chairman (South), filed the suit seeking an order prohibiting INEC from relating with the Victor Umeh-led faction of party in any manner which is inconsistent with the decisions reached at the September 2, 2009 national convention where the party officials led by Mr. Okorie were elected. The Umeh-led faction of the party had argued that the suit was not properly instituted and Mr. Okorie had violated an order of court which said status quo be maintained when he convened the September 2009 convention. Delivering judgment, Justice Bilkisu Aliyu agreed with the second respondent that, the suit was not properly filed as it was filed outside the 3 months period provided in rule 4, order 34 of the Federal High Court procedure. The court said the convention took place during the pendency of Okorie’s appeal against the judgment of an Abuja High Court which upheld his suspension from APGA and recognized Mr. Umeh as chairman, as such it amounted to an abuse of court process.

Moreover, the court said, the convention was an utter disregard of the judiciary. Justice Aliyu dismissed the suit for lacking in merit and competence.