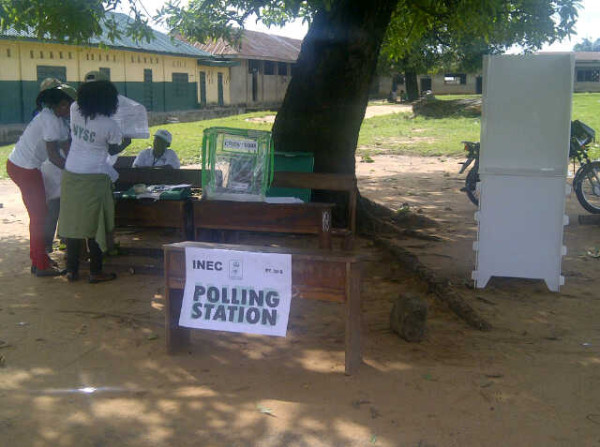 Imoke in early lead, as court restrains INEC in Bakassi

The Peoples’ Democratic Party’s candidate in Saturday’s governorship election in Cross River State, Liyel Imoke, has cruised to an early lead, as results begin to trickle in from various polling units across the state.

Available results monitored by Premium Times are pointing to a landslide victory for the  former governor.

Some early results include the following.

Elections were held In 17 of the 18 local government areas of the state after Justice Adetokumbo Ademola of the Federal High Court, Calabar, granted an injunction sought by some traditional rulers and people of Bakassi Local Government to restrain the Independent National Electoral Commission (INEC) from conducting elections in the area.

The suit No: FHC/CA/CS/21/2012 was instituted by Edet Asuquo, Antigha Cobham, Bassey Etim and Effiong Iman for themselves and on behalf of the people of Ikang, Esighi, Antigha Ene Eyo and Edihi Idim Ikot Eyi, being the four clans that make up Bakassi local government.

The order signed by the Registrar of the Court, Collins Okpa, was in pursuit of the demand for the delineation of the electoral ward to be in accordance with the current Bakassi local government area created pursuant to the provisions of the Cross River State House of Assembly law No. 7, 2007, and not based on the ward delineation as existed before ceding of Bakassi to Cameroun.

Following the restraining, former senator that represented the area, Florence Ita-Giwa had mobilised a protest march against the court order.

It was gathered that Ms. Ita-Giwa, who described the court order as “judicial ambush”, had prepared to visit Dayspring Island, a small island in Bakassi only accessible by water, to vote.

“Going to Dayspring to vote is a ritual we have been doing” Ms. Ita-Giwa told reproters. “We have done it three times -during the National Assembly, presidential and state assembly elections.

“As bonafide Nigerians, we have the right to vote where we were registered. But, for some strange reasons for this governorship election, we have what we call a judiciary ambush.

The injunction stopping INEC from going to conduct election in Dayspring came out at about 4 30 yesterday evening. There was no opportunity for the order to be vacated.”

Cross River Resident Electoral Commissioner, Mike Igini, said his commission had to abide by the court order as a law abiding institution, saying INEC would be going back to court to seek a proper interpretation.