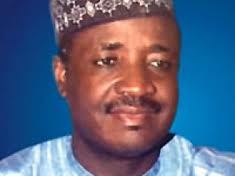 The recently ousted former governor of Sokoto State, Aliyu Wamakko, has been returned the winner of the Saturday’s governorship election in the state

In a landslide victory, Mr. Wamakko of the People’s Democratic Party (PDP) polled 518,247 votes, edging his closest rival, Yusha’u Mohammed Ahmed of the All Nigeria People’s Party (ANPP) to a very distant second with 131,048 votes.

In third place was Abubakar Aliyu Yabo of the Congress for Progressive Change, who got 7,323 votes.

After over 14 hours of collating results presented by returning officers of the state’s 23 local governments, the Sokoto State Returning Officer and Vice-Chancellor of the Kebbi State University of Science And Technology, Abdullahii Zuru, read out the much expected victory words, declaring Mr. Wamakko winner.

The election was however marred by ballot snatching and election violence in numerous polling units across the state, revealed several local governemnt returning officers.

“We had problems leading to the cancellation of election in several areas,” said Sani Aliyu, the returning officer for Kebbe Local Government who cancelled elections in five polling units in two wards having over 4,000 registered voters due to “all materials were snatched by political thugs when voting had started”.

Mr. Aliyu’ revelations were similar in most local governments as announced by their returning officers.

The ANPP has however rejected the result, saying the election was characterised by underage voting, rigging, extrajudicial killing and harrasment of voters.

The monkeys return to the feeding bowl By Uddin Ifeanyi