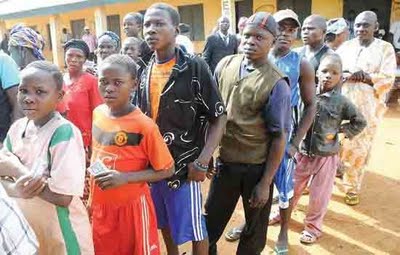 Collation of votes have started at various centres in Sokoto State, following the end of voting and counting of votes at polling units, in the governorship election held on Saturday.

Correspondents of the News Agency of Nigeria (NAN) covering the exercise report that counting of votes at almost all the polling centres began soon after 4 p.m., after voters finished casting their votes.
NAN reports that the exercise, which witnessed a fairly large turnout, especially women, was concluded without any hitch, except for six suspected trouble makers nabbed by the police.
The Sokoto State Commissioner of Police, Adisa Bolanta, confirmed the arrest, adding that the suspects would be detained while their cases would be investigated.
In most polling centres visited by NAN, it was observed that adequate electoral materials were supplied, while security agents kept vigil, with some of them patrolling in vans.
NAN, however, report that voting was disrupted at Mil-Goma in Bodinga LGA, following a disagreement over voting procedure.
NAN gathered that trouble started in the village when one political party stalwart objected to the sequence of voting as arranged by electoral officials.
Following the stalemate, voting was delayed, and as at the time NAN correspondents left the village at 4.45 p.m. voting had not taken place.
NAN also observed that at many polling units, only few political parties were reprsented by agents.
In most cases, only the PDP, ANPP and CPC had agents, while APGA, LP, PDC, MRDD and DPP had agents in few polling units.
According to INEC records, 30 political parties fielded candidates for the election.
Obo Emmanuel James, an NYSC member, who was the presiding officer at UBA ward II, off Kano road, told NAN that though 886 were registered at the polling unit, only 155 turned up for accreditation and voting on Saturday.
Mr. James also confirmed that only the agents of seven political parties showed up for Saturday’s election at the polling unit.
Also at the polling unit by the gate of Sultan Atiku Secondary School, Sokoto, the presiding officer, Olalekan Awosanya, told NAN that only 191 of the unit’s 557 registered voters showed up for Saturday’s election.
Mr. Awosanya – a serving NYSC member – also confirmed that only seven of the 30 political parties contesting the governorship seat sent their agents to witness the exercise. (NAN)