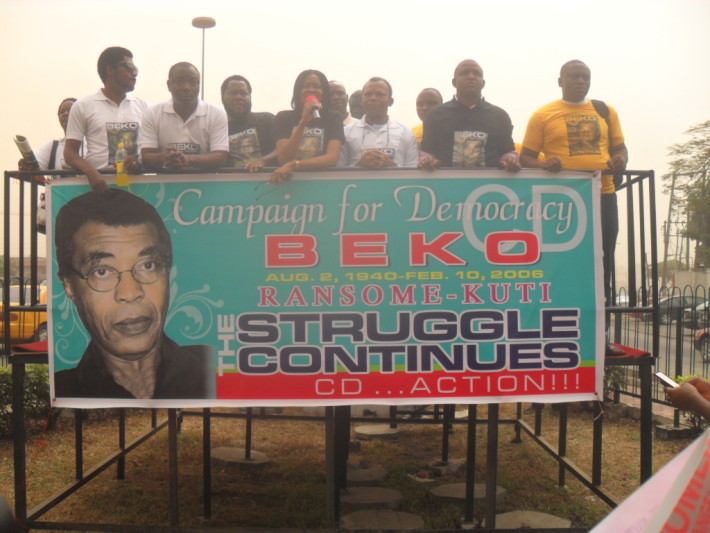 Activists and civil society leaders converged in Lagos, Friday, to mark the 6th year of the demise of Beko Ransome-Kuti, activist and medical doctor.

The memorial, which held at the Beko Ransome-Kuti Park and was organized by the Campaign for Democracy (CD), also involved a wreath laying ceremony performed by Ndubuisi Kanu.

The Retired Admiral and former Military Governor of Lagos State was joined at the foot of Dr. Ransome-Kuti’s statue by Lande Ransome-Kuti, the late activist’s daughter; and Joe Okei-Odumakin, CD’s president, among others.

“We remember the immortal being who was one of the moving spirits of the idea of a Sovereign National Conference in Nigeria,” said Mrs. Okei-Odumakin.

With Fela Anikulapo-Kuti’s songs playing in the background, various speakers took their turns to relive glowing moments of the late activists, especially during the heady days of military rule.

“A practical move by him (Beko), the late Mr. Alao Aka-Bashorun and other patriots to have a national conference at the National Arts Theatre in Lagos in 1990 was smashed by the (Ibrahim) Babangida regime…,” said Mrs. Okei-Odumakin.

“But six years after the death of Beko, the crisis of Nigeria has matured to the point that even Babangida today is an advocate of a national conference,” she added.

While narrating how the late activist helped secure his freedom after nine months in jail in 1989; Femi Aborishade, said the late Ransome-Kuti would be remembered for his “consistency.”

“Consistency in terms of fighting for the freedom of the people, for the emancipation of the people from the shackles of oppression, economic neglect, and political suppression,” said Mr. Aborishade, former Secretary-General of the National Conscience Party (NCP). “As far back as the time he was at the leadership of the Nigeria Medical Association (NMA), he used the NMA to fight the cause of the Nigerian masses having access to free medical care,” Mr. Aborishade said.

On his part, Debo Adeniran, convener of the Beko Rights Club, said that the Nigerian situation “have been degenerating” since Dr. Ransome-Kuti’s death.

“Is it because we have not been struggling right?

Other speakers at the ceremony were Ayodele Adewale, chairman of Amuwo-Odofin local government; Priscilla Kuje, former president of the Nigeria Bar Association; Yerima Shettima, president of the Arewa Youths Consultative Forum; and Dayo Ogunlana, chairman of Coordinating Council of Coalition of O’odua Self-Determination Groups, among others.

Mr. Adewale blamed bad leadership on docile followership; Mrs. Kuje attributed Beko’s frequent ill health which made him “die so young” to his prison experiences; Mr. Ogunlana warned that the Yoruba is “battle-ready”; Mr. Shettima called Boko Haram “evil”; while Ms. Ransome Kuti thanked everyone for coming out to honour her late father.

The gathering ended with the wreath laying ceremony performed by Mr. Kanu, who declined to grant interviews to journalists, amidst chants of solidarity songs.

How we tracked Kabiru Sokoto down, by SSS