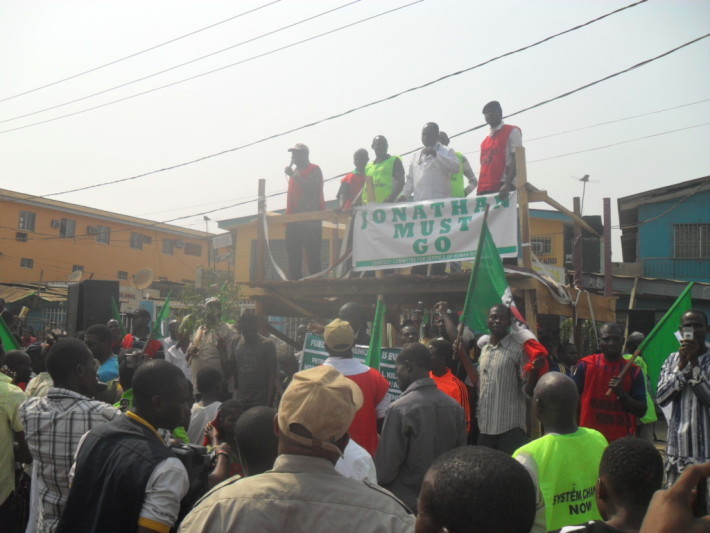 Organized Labour has dissociated itself from the rumours making the rounds that they are being funded by politicians to continue the strike.

Promise Adewusi, the Deputy President of the Nigeria Labour Congress, disclosed this to journalists in Lagos at the end of Wednesday’s rally to monitor compliance and enforce the strike across the state.

“We don’t have any links with any politician, Boko Haram and we are not being funded by anybody,” said Mr. Adewusi.

“We do not have any agenda except to return the fuel price to N65,”  he stated, adding that the strike continues on Thursday barring any directive to the contrary from “our high command.”

As the strike entered its third day, major roads as well as inner streets in the city were deserted and there was little or no vehicular movement. Shops and offices remained closed in compliance with the directive of organized Labour.

At Agboju, along Lagos Badagry expressway, the youth had already set up a makeshift stage and were entertaining themselves.

Mr. Adewusi assured the crowd that the labour leaders “are ready to lay down their lives” in the struggle.

“What we are promising you is if one kobo is added to the N65, we will not agree,” he said.

At the Lagos State University, Ojo, the students told the labour leaders how the police tried to disperse them with tear gas on Tuesday.

“While these protests continue, we don’t want to make it a fuel subsidy protest alone. We want to make a clean Nigeria protest,” said Rafiu Lawal, a former secretary general of the Students Union Government of the school.

“Let us cleanse Nigeria at the same time once and for all because if we refuse to do it now, it will later boomerang on us later in the day,” he added.

Mr. Lawal pleaded with the labour leaders to help effect the release of two students of the university, Ibrahim Arimiyau and Ganiyu Adeniyi, who were arrested by the police during Tuesday’s protest.

In his address to the crowd, actor and lecturer, Sola Fosudo, said the buses and good road network promised by the president were “medicine after death.”

“What is happening is insult upon injury. Nigerians are already injured. We are living under the injury of no light, the injury of no roads, no food, no education, no house. And Jonathan decided to insult us,” said Mr. Fosudo, who said he was representing Nollywood and the academia.

“Oil subsidy, Jonathan, PDP, Okonjo Iweala, all of them must go,” he said.

At Egbeda, where another crowd was gathered, the protesters observed a one-minute silence for those who had been killed since the protest began.

“Tomorrow we are going to Ogba to sympathise with the families of the known people who have lost their loved ones in the struggle,” Mr. Adewusi said.

Reacting to the federal government’s directive for its workers to resume work, Mr. Adewusi said the government has a right to ask their workers to go to work “but we also have the right to refuse.”

“When we finish with this fight, we’ll face the no work no pay matter.”

Britain, Canada, Australia, two others ask citizens to stay away from Nigeria