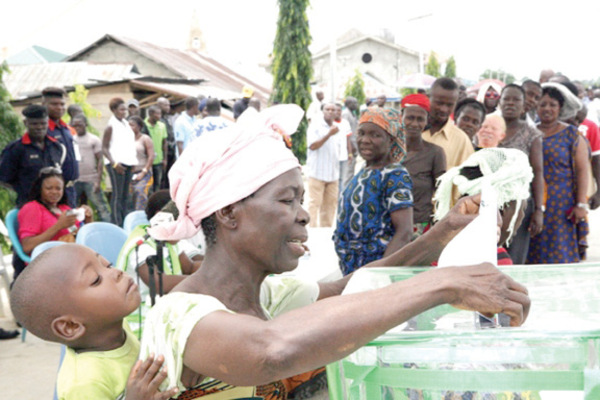 A woman casting her vote

Candidates for the Adamawa gubernatorial election on Monday ignored the ongoing nationwide protest against fuel subsidy removal and continued with their campaign rallies.

The governorship election in the state is scheduled to hold on Saturday.

The News Agency of Nigeria (NAN), reports that the People’s Democratic Party (PDP) would round up its campaign at the Ribadu Square in Yola on Monday, expected to be attended by Vice President Namadi Sambo and former President Olusegun Obasanjo.

Already, the square has been filled to capacity for the commencement of the event.

Similarly, the Action Congress of Nigeria (ACN) candidate, Markus Gundiri has moved his campaign trail to Guyuk local government area, while the All Nigeria People’s Party (ANPP) candidate, Usman Ahmed, is said to be meeting with party officials, preparatory to a grand rally in Yola, on Tuesday.

The CPC, however, said that the fuel strike had affected its campaign plans.

The state Chairman of the CPC, Ibrahim Waziri, told NAN that it had suspended its final campaign rally expected to be graced by Muhammadu Buhari due to the strike.

NAN reports that Zainab Konchi of ADC, Mr. Gundiri of ACN, Mr. Ahmed of ANPP, Buba Marwa of CPC and Murtala Nyako of PDP, are slugging it out for the state governorship seat on January 14, 2012.