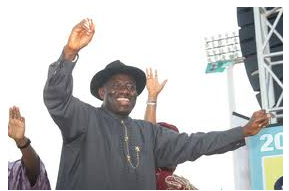 In a seven to zero ruling in favour of Mr. Jonathan and the Peoples Democratic Party, the court declared that even where irregularities occurred during the election that gave Mr. Jonathan a fresh four-year term, the CPC, and its flag bearer, former Head of State, Mohammadu Buhari, failed to prove them

“The judgment of the lower court is affirmed and consequently the third respondent (Goodluck Jonathan) …won the election conducted on 16 April 2011,” Justice Olufunmilayo Adekeye, the lead judge said.

Justice Adekeye said elementary law demands that an accuser seeking to nullify an election must sufficiently back such a case, and not table the defendant’s frail argument as evidence of wrongdoing.

The CPC and General Buhari failed to do so, the court said, upholding the decision of the Court of Appeal, which had earlier struck out the petition.

Dahiru Musdapher, the Chief Justice of the federation, was absent at the sitting, but he sent in his judgment in which he also, like the other five judges present, concurred with that position.

Coming nearly six months after the presidential elections, the ruling brought to an end the legal wrangling Mr. Jonathan faced over a vote that won international plaudit, but bore clearly contentious outcomes.

More than any other claim, the president and the PDP seemed rattled by allegations that majority of the election figures from the states were unrealistic.

For instance, according to results announced by the Independent National Electoral Commission(INEC), Jonathan won in many states with margins as high as 99 percent to 100 percent  of registered voters, figures dismissed by analysts and critics as impracticable.

Those arguments stood central to the CPC’s logic in seeking a cancellation of the elections, but the evidences provided did not seem impressive to the apex court.

As the ruling was read Wednesday morning, Mr. Buhari sat in the courtroom stern-faced, flanked by former minister of the Federal Capital Territory, Nasir el-Rufai.

He dismissed the judgment in a prepared statement he read outside the hall, lambasting the court and the INEC for “blind eye and deaf ear to the gross irregularities” of the polls, just as they did in 2003 and 2007.

He however pledged to respect the ruling as a “law-abiding Nigerian.” “This Supreme Court has proved no better than the Supreme Courts of 2003 and 2007,” he said.

“This year’s 2011 elections eclipsed all the other elections in the depth and scope of forgery and rigging. Initially there were high hopes that after 2003 and 2007 a semblance of electoral propriety would be witnessed. The new chairman of INEC, Professor Jega, was touted as competent and a man of integrity. He has proved neither.

“After asking for and getting close to N100 billion for the election including biometric data with all ten finger prints to conduct a thorough electoral exercise, he botched it,” he added.

Aso Rock welcomed the ruling in a statement by spokesman, Reuben Abati, and urged General Buhari to join in building the nation.

“Now that that process has run its full course,,” the statement said, “President Jonathan hopes that General Buhari and his party will accept the ruling of the esteemed Judges of the Supreme Court in good faith and join hands with him and other well-meaning Nigerians to build a united, stronger and prosperous nation that present and future generations of Nigerians can be proud of.”