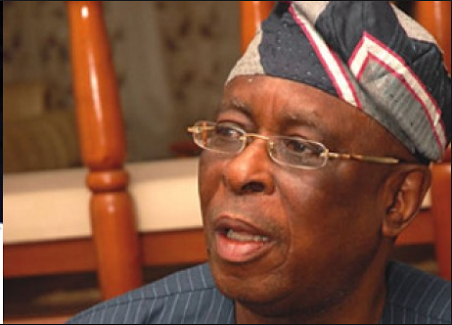 Mr. Osoba who is also a national leader of the Social Democratic Party, SDP, spoke at a meeting with a cross section of traditional chiefs, Baales and Olorituns in Ago-Iwoye, Ijebu North Local Government Area of the state.

He said most supporters of Mr. Amosun are loyalists of the ex-president.

Speaking at the inauguration of some projects initiated by Gbenga Kaka, the Senator representing Ogun East, Mr. Osoba alleged that Mr. Amosun is a sectional governor, who concentrated his projects in Abeokuta and its environs to the detriment of other towns in the state.

The two time ex-governor also decried the “injustice” allegedly meted out to the Deputy Governor of the State, Segun Adesegun, by the Governor.

He pointed out that the shabby treatment of the deputy governor was a slap to the people of Ijebuland, which he said Mr. Adesegun represented.

“We gave Adesegun as Amosun’s deputy because of his experience as commissioner for works. We had expected that the governor would tap from Adesegun’s wealth of experience in governance but the governor chose otherwise and started constructing bridges where there is no water.

“Amosun really dealt with Adesegun; he maltreated him. Ijebu people should not see the insult meted out to Adesegun as that of Adesegun alone. They should see it as a collective insult. Therefore, it is time for Ijebu people to fight back with their votes. I’m begging you to stop the maltreatment of the Ijebus with your votes.

“It is time to defend yourselves. This is not 1999 election when you voted for your kinsman, Jubril Martins-Kuye, against me. You must show Amosun with your votes come February 28, 2015. All of you must come out en masse and pay Amosun back,” Mr. Osoba said.

Mr. Osoba also accused the ruling All Progressives Congress, APC, of planning to mop up Permanent Voter Cards, PVCs, ahead of the elections, urging the voters to beware and resist any form of inducement.

The projects initiator, Mr. Kaka, who named one of the projects after Mr. Osoba, said the gesture was in recognition of the ex-governor’s contributions to the state.

He appealed to the people to vote in SDP in the February general elections, stressing that it remained the only progressive party in the country.