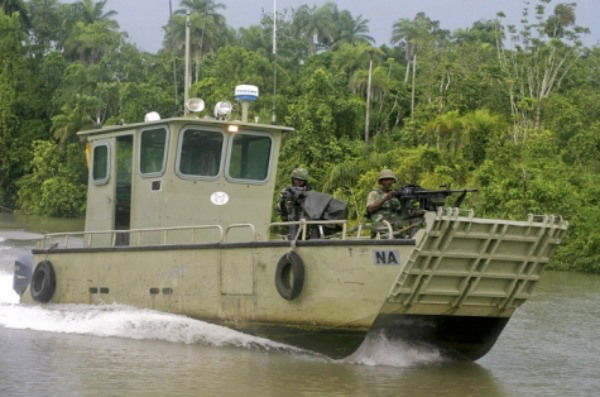 Gunmen suspected to be pirates have allegedly attacked and killed three soldiers of the Joint Task Force, JTF, Operation Pulo Shield in the Nembe axis of Bayelsa, maritime workers in the area have said.

The pirates reportedly hijacked a military gunboat after killing the soldiers on board on Sunday at about 4 p.m.

The military however said it was too early to confirm the deaths of the soldiers.

The soldiers were escorting material to Brass terminal owned by the Nigeria Agip Oil Company, NAOC, when the gunmen opened fire on them.

Maritime workers, who did not want to be identified, said the soldiers were sailing from Port Harcourt to Brass, Bayelsa State, when they came under attack.

“They were ambushed by pirates. It is suspected that the gunmen killed the soldiers and threw their dead bodies into the water and made away with the gunboat,” one source said.

“The gunboat seems to be the target of the hoodlums as arms are being stockpiled by militants ahead 2015 elections.

“The Santa Barbara river in Nembe area where the incident occurred is notorious for piracy”.

The Media Coordinator for JTF, Mustapha Anka, who confirmed the attack said on Monday that it was too hasty to conclude that the soldiers were dead.

Mr. Anka said the outfit had raised a search team adding that efforts were underway to locate the whereabouts of the soldiers.

Ribadu is best thing to happen to Adamawa PDP – Party