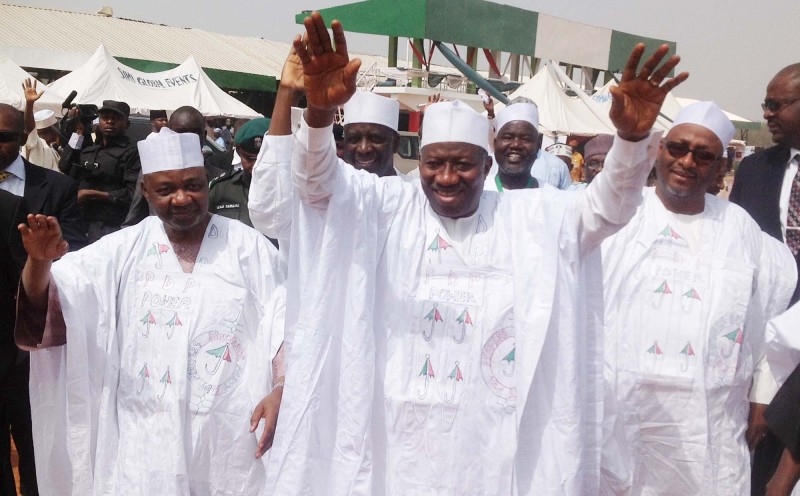 The president addressed a rally in Niger.

President Goodluck Jonathan has appealed to Nigerians to continue to trust the PDP in their choice for elective offices.

Mr. Jonathan made the appeal at a rally organised by the party’s North Central Zone in Minna on Saturday.

He said the PDP remained the only party that was yet to change its slogan, logo or name since its formation in 1998.

The president urged Nigerians not to trust those he said had dined and wined with the PDP for the past 14 years, and had attained various elected positions like governors, senators and others only to turn around and dump the party.

He described such people as chameleons who should not be trusted.

He expressed optimism that the PDP would win elections in Nasarawa and Kwara States come 2015.

He also assured the party’s supporters that it would continue to remain in power in Niger, Kogi and Benue, stressing that the PDP remained the dominant party to beat in the country.

Mr. Jonathan said the rally was not organised to campaign for any elective office but to remind the people of the zone to continue to support the party.

In his remark, the National Chairman of PDP, Adamu Mu’azu, said the party had brought about positive changes to Nigeria and Nigerians in the past 14 years.

“We know PDP is Nigeria and Nigeria is PDP’’, he said.

The Senate President, David Mark, and governors of Bauchi, Plateau, Cross River, Akwa Ibom, Gombe, Kogi, Taraba and Benue were among those who attended the rally.