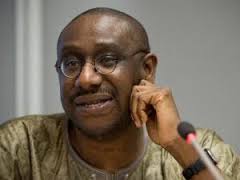 Ode to an Obituarist, By Adekeye Adebajo

It feels so strange to be writing an obituary for a serial obituarist. Kaye Whiteman, who died on 17 May at the age of 78, was one of the most prolific names in African journalism over the last five decades. He wrote eloquent obituaries regularly for the Guardian of London on such diverse figures as Nigeria’s Emeka Ojukwu; Sierra Leone’s Ahmed Tejan Kabbah; Gabon’s Omar Bongo; Germany’s Ulli Beier; and former British High Commissioner to Nigeria, Lord Thurlow. Kaye was the editor of the London-based West Africa magazine for nearly two decades from 1982 to 1999 (having been deputy editor between 1963 and 1973). He was a walking encyclopaedia, and was as comfortable speaking about history and politics as he was about obscure aspects of literature and culture. He was a true Renaissance man, and cosmopolitan citizen of the world.

Kaye grew up steeped in Quaker education in Saffron Walden, a charming English market town. We visited the town five years ago with his Barbadian wife, Marva (with whom he had a son, Simon) to stay in a palatial mansion of a mutual bond-trader friend. Kaye graciously showed us around his birthplace; favourite play-grounds as a child; and even his former family home. As a young man, he attended Oxford University where he read history in the 1950s. It was in this beautiful but conservative city of dreaming spires and lost causes that he had his political awakening. During the Suez crisis of 1956 when Britain and France, allied with Israel, tried to steal Egyptian leader Gamal Abdel Nasser’s Suez canal, he recalled a moving speech by Labour leader, Hugh Gaitskell, at the Oxford Union, and his shame at the British-led neo-colonial invasion.

Kaye cut his teeth in journalism from 1961 as an assistant to the news editor of the now defunct picture paper, The Sphere. He covered the Congo crisis and constitutional conferences to liquidate African empires. He was particularly impressed with the South African musical King Kong, and became friends with Todd Matshikiza (who wrote its score) and his wife Esme. He immersed himself in African highlife, art exhibitions, and writers in cosmopolitan London. He covered the First World Festival of Negro Arts in Dakar in 1966, later describing it as “an unfurling piece of magical realism”. He also attended similar grand festivals in Algiers and Lagos, and was in the secessionist “Republic of Biafra” just after it surrendered to the Nigerian government in 1970.

I first got to know Kaye in South Africa when we both served as international observers during South Africa’s historic 1994 election. I lived for three months in Johannesburg’s cosmopolitan Yeoville, and Kaye was so fascinated by the bohemian cafés and restaurants of Rockey Street that he would often sign off emails years later with nostalgic expressions about the hope that the “spirit of Rockey Street” survived. In the middle of the 1994 election campaign in South Africa, then rising intellectual, Chris Landsberg, hosted both of us to a memorable talk at the Centre for Policy Studies on the “Politics of West Africa”. After the election, Kaye put together an issue of West Africa on “Nelson Mandela’s South Africa” with articles by Chris Landsberg, Ibrahim Gambari (Nigeria’s then Ambassador to the United Nations), Tunji Lardner (one of Nigeria’s finest journalists), and myself. In fact, Chris Landsberg and I got our big writing break from this article, and would write regularly for West Africa as graduate students at Oxford (as would Ghana’s Kweku Ampiah), receiving free copies of the magazine in lieu of payment from the struggling publication.

The breath of Kaye’s writing was truly impressive. As a journalist, he covered summits of the Organisation of African Unity (OAU); Franco-Africa; Commonwealth; and European Union (EU)/African, Caribbean, and Pacific (ACP) States. A great raconteur, he would often describe how he watched Ghana’s Kwame Nkrumah put his hands in his head in utter frustration at the inaugural OAU summit in Addis Ababa in 1963, when he realised that his ideas for Pan-African integration had been soundly defeated. Kaye vividly recalled the “spirit of Rabat” while attending the OAU summit in 1972; and the “spirit of Lomé” in 1975 that united ACP states in negotiations with the EU. He was particularly fascinated by the relationship between France and Africa, and spent much time travelling through francophone Africa. He also moved more in his later life from the short sprint of journalism to longer studies, writing a history of Ecobank and a politico-social study of Lagos. We co-edited a book together in 2012 on EU/Africa relations. Kaye also contributed insightful pieces to academic books: a magisterial essay of breath and elegance on Africa/Europe relations from the Berlin Conference of 1884-1885 to the Tripoli EU/Africa summit of 2010; a rich chapter on Nigeria/British relations since 1960; and a comparative study of the French, British, and American roles in Africa.

While visiting Brussels to research and launch our co-edited book on the EU and Africa, Kaye nostalgically recalled his time there as a fonctionnaire and senior Information Official at the European Commission between 1973 and 1982. He recounted to me how he was told by a French colleague as he was departing Brussels that his career had been “perfectly horizontal”: he had failed to play the ruthless politics of the eurocrats in the quest for perpetual promotions up the career ladder. The fact that Kaye gave up a comfortable existence and chance for a cushy pension to take up the editorship of West Africa in 1982 demonstrated his commitment to both his craft and the continent.

As the problems in West Africa piled up by the mid-1990s, I sometimes visited Kaye in his office in London. He cut a morose and forlorn figure who was seeing much of his life’s work undone by the mismanagement and military autocracy of the magazine’s distracted Nigerian government: owners of West Africa since 1979. He would complain over tea about the “barbarism of Cold Harbour lane”: the site of West Africa, near Brixton. But through all the difficult times of irregularly paid salaries and political interference, he somehow kept producing an interesting magazine, which was forced to pull its punches about the deteriorating political and economic situation in the Nigeria of the 1990s. After West Africa’s collapse by 1999, Kaye served as Director of Information and Public Affairs at the Commonwealth Secretariat in London (and enjoyed a close relationship with its Nigerian head, Emeka Anyaoku). He then launched and edited Business Day in Lagos between 2001 and 2002, writing a weekly column for them until his death. He was a Trustee of the Africa Centre in London.

Kaye believed in the “supreme power of language to change the world,” and talked of writing his memoirs. He loved Oxford and always relished visits there, going often to reunions at his old college, Queen’s, and as a trustee of the Noma Awards for Publishing in Africa. We were together at Oxford in March, launching two books on the EU and Africa; and Nobel Peace Laureates of African Descent. We rode the bus back together from Oxford to London, chatting all the way. It would be the last time I would see him alive. In a special issue of West Africa to commemorate its 80th anniversary in 1997, Kaye had expressed the hope that the magazine would reach its centenary in 2017. Sadly, neither he nor the magazine achieved this milestone.

The making of Boko Haram, By Tolu Ogunlesi

Dimgba Igwe to be buried October 11 in Abia

The Double Death of Kaye Whiteman and West Africa, By Jibrin Ibrahim