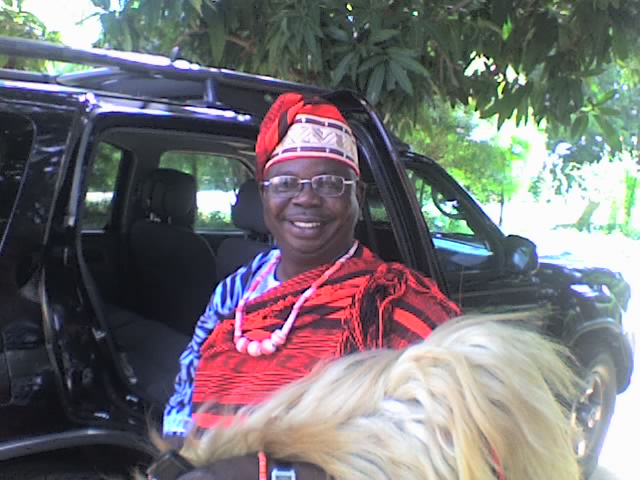 So I finally caved in to reality. I garnered the courage to look at the photos we took together, again… A devastated acceptance that death had indeed done its worst, and that those smiles were forever frozen!

Professor Jenkeri Okwori, erudite professor of Theatre Arts at the Ahmadu Bello University, Zaria and one of the pioneers of Participatory Development Communication in Nigeria, a first class intellectual and pride of our Ukalegwu, Orokam clan back home in Benue State, had yielded to death’s inconsiderate claws on February 12. It was the complications from an accident he had earlier on February 7 along the Abuja-Kaduna road. Three others, Professor Sam Kafewo (HOD of the dept), Dr. Martins Ayegba (the department’s postgraduate coordinator) and a PHD student of the department, Ayishatu Nana, had perished alongside. Jenks was only 52.

Jenkeri. Of course, everyone knows him- one of the first graduates and the first professor from my village. He was the reference point for the academic-tilting child, the prodigy, the shiny light in a region darkened by socio-economic and socio-political exclusion… the ‘land of palm trees’, sandwiched, as it were, on the tripartite red-soiled borders of Enugu, Kogi and Benue States, claimed by the latter, but mostly in name…

Back in his roots, Jenks was always in the news… When he was not working with other elites, coordinating efforts to bring electricity to our village, providing the village with a new police post, he was supplying our Ukalegwu community with bore-hole water, coordinating medical outreaches or organizing town hall meetings. Always doing something for his people, and so full of life!

For a man ever on the move, I got very lucky to have an up-close and most memorable time with him in July last year in Addis Ababa, Ethiopia. He was one of our facilitators at the ‘Artists as Peace-Builders’ Course (Using Participatory Theatre for Conflict Transformation) at the Institute for Security Studies (ISS). We bonded like old buddies and chatted for a long time. Chubby, lively and with his trademark boyish smiles, Oh! I had no inkling whatsoever that it would be our last physical meeting. 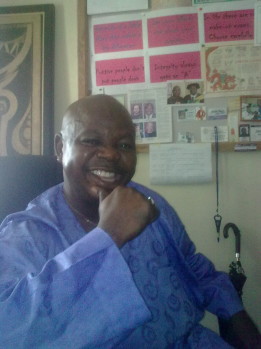 Jenks the intellectual (who became a professor at age 43 back in 2005), stood out at the ISS training which took two weeks. He was with us for two days, conducting theory and practical training on how the writers, poets, actors, painters among others drawn from several African countries (with Chika Ede of the United Nations in South Sudan and I being the Nigerians in the group) could utilise the arts to bring about enduring peace in our turbulent world. When he finished the theory in the course of which he unraveled ‘behind-the-scene’ scary security facts (being a consultant to several international agencies on peace-building in the Niger Delta and the North), the class fell into a deep depression. But later on, we were revitalised by the practicals –drama sketches, song and dance… knowing we could make a difference. What a fantastic teacher!

No doubt Jenks lived the good life, led the way and shorn so brightly. He was the best graduating student in the Theatre Arts in ABU in his 1982 Drama (Theatre Arts) class and was employed by his university soon after NYSC owing to his exceptional brilliance which the school discovered would be an asset that could benefit generations of students. And he had remained in ABU in over three decades, impacting knowledge, training generations of actors and actresses, and others. But also venturing into several other areas such as peace building, women’s rights, helping with the setting up of several new universities and building human capacities in Nigeria and beyond while consulting for myriads of international agencies on dozens of projects. He was also an actor, director and film producer per excellence, and was the coordinator of the state of the art Development Communication Centre at ABU. So versatile!

In his work he garnered laurels and recognitions along the way, some of which include Fellow, Society of Nigerian Theatre Artists, 2009; Winner, Best Comedy Actor Award at the Festival of Television Programmes in 1988; Visiting Fellow in Community Theater, King Alfred’s College, Winchester, UK (September – December, 1995); Fellow Humanities Institute, CODESRIA, School of Performing Arts, University of Legon, Ghana (January – March, 1998); Fellow Program of African Studies, Northwestern University, Evanston, Illinois, USA (April – June, 1998); Visiting Scholar in Residence, Institute of Development Studies, University of Sussex, UK (February 2002 – September, 2003); Rockefeller Resident Fellow, Appalachian Centre, University of Kentucky, USA (January – May, 2004); Fulbright Scholar, Department of Drama, Tisch School of the Arts, New York University, USA (November 2004 – April, 2005); A graduate of the Mac Arthur Foundation Fund for Leadership Development (three year project on socio-cultural practices that militate against women’s reproductive rights in Northern Nigeria); Lead consultant and researcher for several local and international organizations and agencies including the World Bank, CORDAID, JDPC, the FCT, British Council, DFID, several states in the north, member National Technical Working Group on Vision 20:2020 and many, many others.
“I knew him as a child, an exceptional child and an exceptional student who led his classes both in primary and secondary school days. It’s such a big loss, a painful loss,” said Kogi State-based teacher who grew up in the village with the late professor.

Most painfully, Prof had been nominated for the Centenary Awards in recognition of his great contributions to the development of the theatre in Nigeria and impacts on many fronts, but his death on February 12, only a few weeks to the award ceremony, robbed him of that glory.

In a country where neither the roads nor air is safe, gems are never spared the crude hammer of extinction (The gnawing road had claimed similar genius Prof. Festus Iyayi only a few months ago). With progressively nose-diving standard of education, the tragic loss of these experienced hands at their most productive years is particularly colossal. Indeed, Jenks’ demise is not only a national but a continental and indeed a global loss—a loss beyond words.

“Anyone who met Jenks knew him as a dynamite, a most likeable enigma, a man of many parts with so much packed in him,” said Dan Ugo, a senior Customs officer who together with late Okwori input funds and rallied other elites via the Okam Forum to provide electricity and water projects, among others for Orokam communities in recent years. “Right from his first year in ABU in the seventies, everyone knew him because of his marvelous acting talents. His deep knowledge of our history and culture was simply awe-inspiring. I stand to be quoted that in terms of Jenks’ contribution to community development, no politician has done as much. But we are comforted that he lived a fulfilled life,” he added.

And now, this weekend (March 7-8), the scholarly Jenks (aka ‘Chokoli’, a nickname he earned from being a lead actor in a major drama series in the 1980’s) will be interred in our ancestral village of Ukalegwu-Igwu, Orokam, Ogbadibo LGA of Benue State. He is survived by a wife, five children, an aged mother among others.

Adieu, Uncle Jenks. May your great soul rest peacefully with your Maker…

Abah is Lagos-based journalist and activist.

Dimgba Igwe to be buried October 11 in Abia

Ode to an Obituarist, By Adekeye Adebajo

The Double Death of Kaye Whiteman and West Africa, By Jibrin Ibrahim