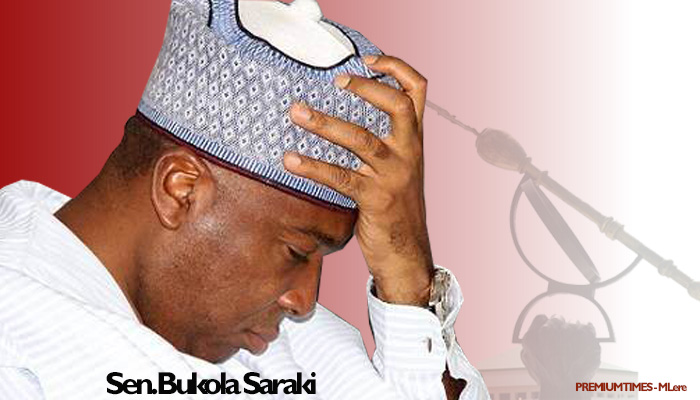 Toyin, the wife of the President of the Nigerian Senate, is a mere business front for her husband, fresh documents retrieved by PREMIUM TIMES from the massive Mossack Fonseca database have shown.

According to the new documents, the assets in Toyin’s name in tax havens are actually held in trust for Bukola Saraki, Nigeria’s third most powerful official.

PREMIUM TIMES had reported on Monday that Mr. Saraki failed to disclose four assets found to be in his wife’s name offshore, in violation of Nigeria’s code of conduct law.

That revelation came to light following the leak of a trove of internal data from the Panama-based offshore-provider, Mossack Fonseca, obtained by the German newspaper, Süddeutsche Zeitung, and shared by the International Consortium of Investigative Journalists (ICIJ) with PREMIUM TIMES and over 100 other media partners in 82 countries.

In his response to that publication, Mr. Saraki said the controversial assets belonged to the estate of his wife’s rich and famous family, and that the law did not mandate him to declare such a category of assets.

But PREMIUM TIMES has now found that the assets neither belong to Toyin nor to her family’s estate. They are clearly Mr. Saraki’s.

One of the companies in Mrs Saraki’s name in Seychelles Island is Sandon Development Limited, a vehicle used in acquiring a property on 8 Whittaker Street, Belgravia, London, in 2012.  Another shareholder listed for that company is Babatunde Morakinyo, a long-term personal aide and friend of Mr. Saraki.

However fresh evidence has shown that Mrs. Saraki and Mr. Morakinyo were mere fronts, nominee directors holding assets in trust for the Senate president.

According to one of the documents in our possession, in April 2012, while still Kwara governor, Mr. Saraki, describing himself as landlord of 8 Whittaker Street, London and 70 Bourne Street, London, executed a deed granting his tenants licence to alter the premises of the properties.

Part three of the deed read, “This license is supplemental. The reversion immediately expectant on the determination of the lease is now vested in the landlord.

Recall that it was from Renocon that Mrs Saraki, posing as owner of Sandon, purportedly bought Number 8 Whittaker Street in July 2011.

But it is now clear that both companies actually belong to Mr. Saraki, and that he only used a company owned by him to buy a property from another of his companies.

His wife, Toyin, fronted for him in the purported transaction, and it is not clear why the Senate president acted that way.

Company documents show that Mrs. Saraki owns 25,000 numbers of shares with a par value of US$ 1,00 each, and was appointed the first and only director of the company.

Mrs Saraki however, in a letter to ICIJ, through her lawyers, denies ever owning any shareholding in Girol Properties.

But we have now retrieved a document linking her firmly to the firm, as well as another handwritten document suggesting that Mrs Saraki was known within Mossack Fonseca as just a nominee director and not the beneficial owner of the company.

See the document below.

Landfield International Developments Ltd., a company registered in the British Virgin Islands on April 8, 2014, had Mrs. Saraki as sole shareholder.

But it is now clear she was a mere front, as Mr. Saraki has since discreetly taken over the company using Longmeadow Holdings Limited, another shell company registered in Jersey.

To effect the take-over, a board meeting of Landfield purportedly held on January 28, 2015, where it was agreed that the company be sold to Mr. Saraki for over three million pounds.

The minute of that meeting, retrieved from the company’s file, as contained in the Mossack Fonseca database, reads in part,

“lt was noted that there had been ongoing negotiations and discussions between Dr Bukola Saraki, Oluwatoyin Saraki and Longmeadow Holdings Limited, a company registered in Jersey (the ‘Buyer‘) in relation to:

“3.1.1 The transfer of the entire issued shares of the Company from Oluwatoyin Saraki to the Buyer for the purchase price of £3,000,000 (three million pounds sterling) (‘Transfer’);

“DOCUMENTS PRODUCED TO THE MEETING

It was noted that the stock transfer form in respect of the Transfer had been executed and was in a form acceptabie to the Company. 1476133W18Q-3

That same day, Mrs. Saraki wrote to Mossack Fonseca informing it that she was transferring the beneficial ownership of Landfield to Mr. Saraki and his company.

By that letter, Mr. Saraki assumed full control of the company through Longmeadow.

A fresh trouble for the Senator

This fresh revelation that Mr. Saraki actually owns the assets hidden in his wife’s name may complicate issues for the politician who is being tried by the Code of Conduct Tribunal for allegedly failing to declare his assets in full.

While not all owners or operators of such offshore entities are criminals, owning or maintaining interest in private companies while serving as a public official is against Nigerian laws.

Section 6(b) of the Code of Conduct Act says a public office holder shall not, “except where he is not employed on full‐time basis, engage or participate in the management or running of any private business, profession or trade”.

The Code of Conduct Bureau had on September 16, 2015 slammed charges on Mr. Saraki, accusing him of offences ranging from anticipatory declaration of assets, to making false declaration of assets in forms he filed before the Bureau while he was governor of Kwara state.

The Senate President was also accused of failing to declare some of his assets, acquiring assets beyond his legitimate earnings, and operating foreign accounts while being a public officer – governor and senator.

The offences, the charge said, violated sections of the Fifth Schedule of the Constitution of the Federal Republic of Nigeria 1999, as amended.

Mr. Saraki is also said to have breached Section 2 of the Code of Conduct Bureau and Tribunal Act and punishable under paragraph 9 of the said Fifth Schedule of the Constitution.

The Senate President has denied wrongdoings, saying the case was politically motivated and that he was merely being persecuted for emerging the President of the Nigerian Senate against the wishes of his political party, the ruling All Progressives Congress, which preferred a different candidate.

The African Network of African Reporting Centres (ANCIR) contributed reporting for this story.

INTERVIEW: #PanamaPapers: Why I leaked documents that led to global investigation – John Doe

EXPOSED: #Panamapapers: The Nigerian lawyers who acted as intermediaries for Mossack Fonseca