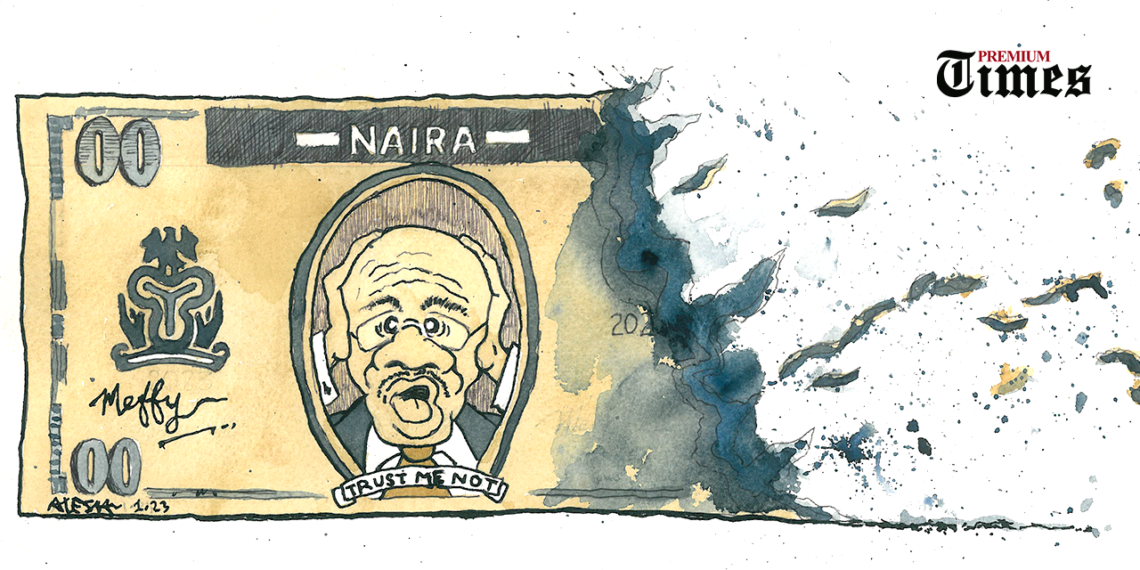 PREMIUM TIMES believes that no one has worked harder to debase the Central Bank of Nigeria than its current governor.

Controversy dogged the decision by the Central Bank of Nigeria (CBN) to redesign the nation’s banknotes from the day in October last year when the bank’s governor announced it. There were questions around the propriety of the redesign before serious conversations had been had about currency reform. With the N200 and N500 notes worth less than US$1, did it not make sense to put them out as coins? Given how rapidly these currencies move around the economy, they were likelier, as coins, to bear the ensuing wear and tear better than as notes. The question of the populace’s supposed unwillingness to hold coins raised a further reform challenge.

By lending nearly US$50 billion to the Federal Government without holding collateral of any sort, the Central Bank was not only caught out in an illegality, it had drawn a bold line under the question of how fit for purpose it still is. However, reconciling the Bank’s price stability mandate with conduct that so clearly helped push domestic prices up, was but one of several outstanding matters. The economics of a banknote swap ahead of a general election was always dodgy. By constricting demand, the swap was always going to hurt domestic output growth during and in the months preceding it. And that was before you added the challenges faced by the man on the street in completing online transactions. Even more questionable was the economics of deploying currency in circulation as an anti-inflation tool.

With a little over a fortnight to the deadline for swapping old banknotes with the new ones, the economy struggles: the new banknotes remain a collector’s item; and banks’ automated teller machines (ATMs) continue to dispense the old notes. The CBN’s contortions have been unhelpful. It reversed itself on the amount of cash that banks’ customers may now withdraw across the counter. Having instructed banks to provide the new notes through ATMs from 9 January and only in the N200 denomination, last week it ordered them to do so immediately, and across banknotes. Yet, it takes the original equipment manufacturers weeks to reconfigure the ATMs to dispense these new notes.

That the Central Bank is not aware of this technical hurdle would be a surprise. That it keeps issuing these instructions to banks to make the new notes available, even when it is unable to meet the banks’ needs, borders on the irresponsible. Yet, the policy was fated to be so. The Nigerian Security Printing and Minting Plc. was already struggling with the task of replacing defaced and/or mutilated currency. There was no way it was going to produce N3 trillion worth of banknotes in a year. That the CBN sought to optimise this constraint by casting it in terms of unorthodox monetary policy measures designed to fight inflation is instructive, and that it persuaded the president, even more so.

How would this impact our cash-based local businesses and the markets in which they operate? Without moving the 31 January deadline for the note swap, it is a fair bet that the domestic transaction system will collapse. As doubt swells over the naira’s usefulness as a store of value, unit of account, and means of exchange, the use of the CFA Franc will spread inwards from border towns – a process that will be expedited by the CFA Franc’s improved exchange rate vis-à-vis the naira. In inner cities, dollar cash transactions will spread.

Extending the sunset date for the banknote swap, attractive though it might seem at first blush, will not do. At least without increasing the Nigerian Security Printing and Minting Plc.’s capacity to produce banknotes. Neither will an unwieldy exit that sees both banknotes co-existing for an undefined period, during which the CBN would try to get a proper handle on this snafu. A far better solution might be to acknowledge the mess that has been created, withdraw the new notes, and fix the root incompetence that this is a pointer to.

In the end, currencies are pieces of paper. Markets use them only because they trust in the issuing authority. PREMIUM TIMES believes that no one has worked harder to debase the Central Bank of Nigeria than its current governor. The problems with the naira, whether in relation to the dollar, in relation to domestic goods, or simply as banknotes and coins, are but symptoms of a much deeper malaise.