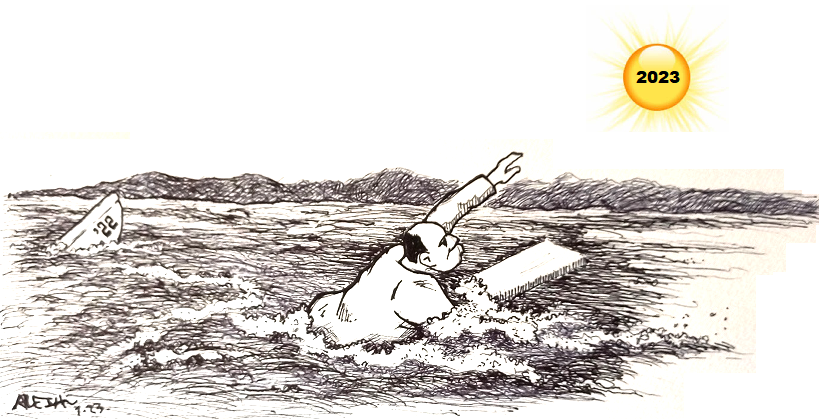 A hopeful 2023, despite spiralling insecurity

EDITORIAL: A hopeful 2023, despite spiralling insecurity

We leave behind 2022 with its avalanche of security challenges, agitations for secession, inflationary pressures, strikes that disrupted the academic calendar and social dysfunctions.

The much-awaited year, 2023, is here. Its resonance in every neighbourhood and public place across the country is exemplified in the cascade of the age-long compliment, “Happy New Year.” The shibboleth is an expression of joy and hope for a brighter year ahead. Indeed, those who are lucky to have witnessed the new dawn have good reasons to be rapturous as the just ended 2022, in every material particular, qualifies as annus horribilis. 2023 is the fatidic year when President Buhari would have spent eight years in power, not doing his daily job of governing, and would be succeeded, hopefully by someone who will GOVERN and GOVERN WELL.

We leave behind 2022 with its avalanche of security challenges, agitations for secession, inflationary pressures, strikes that disrupted the academic calendar and social dysfunctions. It is a year better forgotten.

Regrettably, this resolve will not be moral armour for all, especially those who lost their loved ones in a wave of wanton killings by non-state actors and even deranged police officers that swept through the country’s landscape last year. That callous fate befell the family of Omobolanle Raheem, a pregnant lawyer, who was fatally shot by a suspected inebriated Assistant Superintendent of Police (ASP), Drambi Vandi, under a bridge in the Ajah area of Lagos State. She was in a car driven by her husband, while returning from a Church service on Christmas day.

Vandi, who has since been arrested, operated from the Ajiwe police division, where a yet-to-be-identified cop also shot another citizen, Gafaru Buraimoh, dead at the same spot three weeks earlier. The idea of police officers killing innocent citizens they are paid to protect is very provocative and insufferable.

On 18 December, 38 people were killed in separate attacks in Malagum 1 and Sokwong villages in Kaura Local Government of Kaduna State, in what was viewed as reprisals. A total of 104 houses were burnt. The latest Southern Kaduna killings are a brutal echo of the Owo tragedy in June, when gunmen invaded St. Francis Catholic Church, in Ondo State, and killed 40 worshippers. The Abuja train assault/kidnapping, alongside the Kuje prison invasion and release of over 800 inmates, including 60 Boko Haram fighters, were security breaches that should provoke new strategic thinking for a better secured society this year.

However, in the Omobolanle Raheem senseless killing, both President Muhammadu Buhari and the Lagos State government have indicated the path to be followed. It is reassuring that the President has called for “the strongest possible action” in a statement by his media aide, Garba Shehu, against the trigger-happy cop. Sadly, it was not only the lady who was killed but also twin foetuses, as she was said to be an expectant mother. The Lagos State Commissioner for Justice, Moyosore Onigbanjo has elected to lead the prosecution team in this case to underscore the state’s desire to ensure that justice is served in the matter. The Nigeria Bar Association (NBA) too has weighed in, fighting the cause of its late member. These are commendable steps to take in a decent society. Government’s spirited efforts should not be limited to the lawyer’s murder. The truth is that many have died in similar circumstances without the appropriate authorities taking any action. The blood of these other victims also cry for justice.

Extra-judicial killings in the country, which all have denunciated, must end. But the latest has rekindled the communal rage or feeling of the 2020 #EndSARS protests, which underlined the fact that injury to one is an injury to all. The president attributed the Christmas tragedy to the police officer’s blatant disregard for weapons handling reforms already in place. He tasked the police hierarchy to see the ugly incident as a wakeup call to enforce this in order to forestall similar occurrences. But the buck stops at the President’s table as the country’s chief security officer. In his remaining five months in office, Buhari should not only bark, but also bite. That is the only way his directives will be taken seriously. This redemptive drive involves demanding results from his security chiefs from the daily security briefings he gets; and sanctioning those not alive to their responsibilities, as it is done in other jurisdictions where human lives matter and are regarded as sacrosanct.

In the wake of recent attacks on offices of the Independent National Electoral Commission (INEC) in the South-East, Buhari warned that “Whoever wants the destruction of the system will soon have the shock of their lives. We have given them enough time.” This avowal will tick all the boxes if the security agencies could fish out and prosecute the masterminds of the 42 reported attacks on INEC offices in 14 states within seven months.

But in spite of these toxic echoes of our immediate past, Nigerians are wont to face the future with optimism, living the Charles Dicken dream: “…don’t leave off hoping, or it’s of no use doing anything. Hope, hope to the last.” This didactic chord of the Victorian Age has become more of an elixir now for many as the 2023 democratic transition programme enters its crucial last lap – the end of Buhari’s regime! The popular expectation is that with promises made by candidates vying for the post of president, whoever emerges on 29 May will embrace massive policy shifts in order to make his mark. Invariably, this may herald a new order that could considerably mitigate the security and socio-economic disasters of the moment.

The emergence of a new Nigeria is possible if Nigerians can appreciate the powers inherent in the critical Office of the Citizen in a democracy, by making it count in this year’s election. Right choices must be made at the polls in February/March, when the president and other public office holders would be elected. Vote-buying by politicians and thuggery, which sullied some of the off-season polls conducted in recent past, should be shunned. An electoral process that subverts the wishes of the majority; where primordial and sectarian considerations trump national interest, will only prolong the odious, extant governance template that has stymied development throughout the country.

It can be reversed. It is the lesson the last governorship contest in Anambra State unfurled when some poor village women, in a viral video, spurned the N5,000 given to them each by agents of one of the candidates, to vote against the dictates of their conscience. The Joseph De Maistre dictum that “In a democracy, the people end up with the government and leaders they deserve,” should be an alarm bell for the 2023 elections.

Why our opponents are jittery – Bola Tinubu