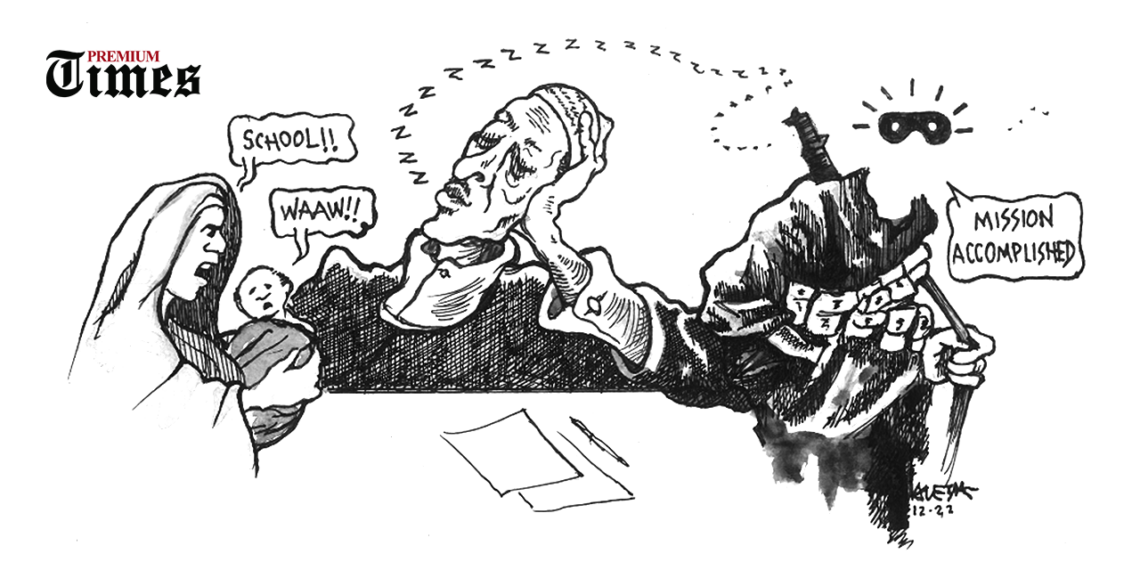 Nigeria failed these girls in 2014 by not securing their lives while in school. It should not repeat it by abandoning them to a cruel fate.

A group of Chibok schoolgirls rescued from Boko Haram’s captivity are crying to the government for re-enrolment to complete their truncated secondary school education; and even go higher. This is agonising. The impression created before now was that government would do whatever it takes to help those freed to put behind them the barbaric and heart-wrenching episode of 14 April, 2014. The circumstances of their case are not what a responsible government should wait to be reminded to do. Their wish should be granted, as it will deny the terrorists the delight of the ultimate actualisation of their main objective.

Forcibly caravanned away as teenagers, they returned as adults and mothers after eight years of living under the most horrifying conditions in the den of Boko Haram – a soulless sect with the belief that Western education is taboo. Debauched and demented, the cohort is notorious for enslaving and raping women, forced marriages, alongside killing and torturing of their victims. These indignities are exemplified in the babies, pregnancies and bodily injuries the young ladies returned with.

In an emotive reminiscence, three of them, Maryam Dauda, Hassana Adamu and Ruth Ngalada, on behalf of their colleagues, told a national daily in an interaction that: “We want government to send us back to school. We heard that some of us who were taken away like us have gone back to school abroad. We want to go back and complete our education. This brings back our respect (sic). As for our children, government can take care of the children, while we are back to school.” They stressed, “We are not happy that we are not in school.”

The message is clear. No matter what the government might do to rehabilitate them, living a fulfilled life is well nigh impossible unless they live their dreams of being educated to be useful to themselves and the larger society. PREMIUM TIMES believes that the rescued ladies should be made Nigeria’s iconic symbol of resistance and triumph over religious fundamentalism, and in that context they should receive priority attention in accessing quality education, instead of being left as emblems of surrender to evil, societal rejection, and abandonment.

It is unnerving that most Nigerians and even the government seem to have moved on, or forgotten the dastardly act, when the Boko Haram sect kidnapped 276 female students, who were sitting their final examination, in the dead of the night in 2014. It elicited international concern. Within Nigeria, it sprung forth an activist movement known as #BringBackOurGirls, devoted to their rescue, which even the First Lady of the US at the time, Michelle Obama, signed on to. That national show of shame, under the Goodluck Jonathan Presidency, saw the government live in denial for three weeks before its admission, thus making the timely rescue of the girls impossible.

However, many had thought that President Muhammadu Buhari would pull the chestnut out of the fire, by securing the release of all the kidnapped girls. His antecedent as an army general and the redemptive avowal in his May 29, 2015, inauguration speech, raised hopes. He charged: “But we cannot claim to have defeated Boko Haram without rescuing the Chibok girls and all other innocent persons held hostage by insurgents.”

Afterwards, an epiphany of sorts happened with the release of 82 of the girls in 2017. This was made possible after protracted negotiations in Switzerland and Sudan, in which a Nigerian lawyer, Mustapha Zana, the Swiss government and Red Cross played key roles. It involved the federal authorities’ exchange of Boko Haram commanders in government’s custody for those rescued then. The feat sparked a sense of hurrah and optimism that the remaining girls too would savour the salubrious air of freedom, sooner than later. Earlier, 21 of them were freed in 2016. Sadly, it appears there are no more calculated efforts to free the remaining abducted girls, except the straggling efforts of a handful of individual escapees. As it stands today, about 80 of them remain in the Sambisa Forest, the den of the abductors or in other terrorist hideouts.

The 14 young Chibok ladies who have voiced their desire to complete their education might be taken as a sign that the majority of them, if not all, would like the same opportunity. Government should stop paying lip service to the imperative of education for all. It should show its commitment by taking immediate action in prioritising access to education for the 20 million out-of-school children in the country. It should not be forgotten that this is the highest globally, according to UNESCO.

Nigeria failed these girls in 2014 by not securing their lives while in school. It should not repeat it by abandoning them to a cruel fate and denying them the fundamental right of being educated. Governor Babagana Zulum of Borno State, who works so hard to breathe new life into all the victims of insurgency in the state, should see the continuation of their education as a gauntlet he must pick up, if the Federal Government unashamedly abdicates that responsibility.

Zulum’s predecessor, Kashim Shettima, while receiving the rescued 21 girls while in office, informed them that 56 of their colleagues, who escaped the abduction, were placed in two international colleges at public expense. In addition, the state took care of their other basic needs. “Left to me, I will want the 21 of you to join them in those two schools”, he stated then. That offer might not have been taken because of the haunting experience of 2014, still fresh in their minds. But this is 2022, eight years after. The story of Lydia Pogu, their colleague, one of the 57 girls who escaped from the kidnapper’s truck, is inspiring them. In April, she bagged a Masters degree from Southeastern University in USA. Also, the progress of Debbie and Grace and others, sent to the US to continue their schooling by a non-profit, Education Must Continue Initiative, shows how proper care and an environment conducive to learning can change the lives of these girls.

The motherhood status of these ladies should not be an excuse. To capitalise on it will be discriminatory and unconstitutional. Government’s welfare departments can fashion out a way to take care of their children, as they suggested, whom they could visit and relate with while in school or during their vacations.

Healthcare is more than what is done in the consulting room, By Marietta Imadojiemu