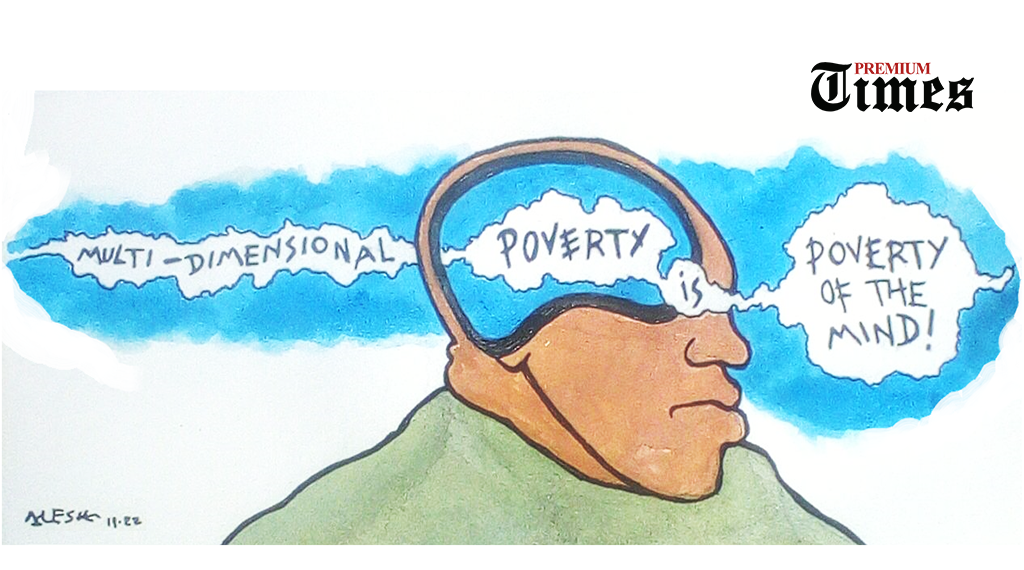 Nigeria has no choice but to win the war against corruption, defeat Boko Haram and its allies and entrench accountability in governance.

The National Bureau of Statistics’ latest report on poverty offers a sobering reality of life in Nigeria. It affirms that more citizens are mired in the morass of deprivations than the 86 million people previously indicated in the world poverty clock. Coming in the twilight of President Muhammadu Buhari’s regime and the implementation of a slew of poverty reduction policies, it calls for a reality check on the effectiveness of extant policy tools.

Specifically, a total of 133 million Nigerians, representing 63 per cent of the population, are being ravaged by multi-dimensional poverty. Predicated on a broad range of indices like health, education, living standard, work and shock, the survey exposes the underbelly of governance in the country. The assessment was conducted between November 2021 and February 2022; and it involved 56,000 households spanning the 36 states of the federation, including Abuja, the Federal Capital Territory. The findings point to a notorious fact – that the North bears much of the burden of poverty in Nigeria, with the North-East recording 76.5 per cent, the North-West – 75.8% per cent, North-Central – 66.3 per cent, South-South – 62.6 per cent, South-East – 49 per cent, and the South-West – 40 per cent.

In all the regions, women feature prominently as a category that is negatively impacted. Not surprising, children constitute more than half of the demographics affected. As expected, 72 per cent of the victims of Nigerian poverty are in the rural areas, as against 42 per cent in the urban centres. The NBS partnered with the United Nations Development Programme (UNDP), UNICEF and Oxford Poverty and Human Development Initiative (OPHI) in producing this telling report. Dimensions explored in arriving at the Multi-dimensional Poverty Index (MPI) include nutrition, food, insecurity, healthcare, water, water reliability, sanitation, housing materials, cooking fuel, assets, unemployment and underemployment.

The story of the past two decades is that the poverty of leadership at both the federal and sub-national levels has denied the Nigerian people of good and implemented policies that would have mitigated poverty. Nigeria, for instance, failed to attain the global Millennium Development Goals in 2015, which was an agenda of the United Nations, whose first two pillars were on the eradication of extreme poverty and hunger, and achievement of universal primary education. Food security has been a major concern in the country. Farmers have deserted their farmland in many parts of the North due to the Boko Haram insurgency and killings by bandits and terrorists. Not less than 1.9 million internally displaced persons in the region live on charity, are malnourished, and face serious health challenges. The crisis is being compounded by the recent flood disaster, pushing food inflation to reach 23.72 per cent in October.

A country supposedly committed to universal primary education (UPE) withdrew a former governor’s prosecution by the Economic and Financial Crimes Commission (EFCC) for allegedly stealing N1.9 billion collected from the Universal Basic Education Commission (UBEC), meant for upgrading the state’s primary schools. As of March, 26 states failed to access N33.6 billion UBEC funds for the local development of education, as they were incapable of withstanding the due process contingent upon the release of the funds. Figures of Nigeria’s out-of-school children have continued to rise. From 10 million a decade ago to 13.5 million six years ago, it is now 20 million. This is ominous. A former President, Olusegun Obasanjo warned last week at a national education summit that the country risked having these children as an army in-waiting for Boko Haram in the nearest future, if they are not quickly re-enrolled in schools. The reality is that getting the children back to school is unlikely to happen without the decimation of Boko Haram.

In the attempt to mitigate poverty in the country, the Buhari regime has experimented with a raft of policy measures like the National Social Investment Programme, comprising N-Power, Conditional Cash Transfer, TraderMoni, MarketMoni, FarmerMoni and the School Feeding Initiative. The president inherited many other schemes from his predecessor, such as the National Poverty Eradication Programme and Rural Infrastructure Development Programme. The N75 billion set aside under the National Youth Investment Fund, initiated in July 2020 to cushion the effects of the COVID-19 pandemic on the most vulnerable, ends this December. Ironically, these interventions have only scratched the surface of the problem. What has been even more disturbing are the concordant reports that many of such programmes simply serve as conduits to the pockets of corrupt officials.

The business environment requires policy tweaks to make the real sector operate optimally and create jobs. The present unemployment rate of 33.3 per cent is debilitating. Many businesses have crashed under the weight of the harsh operating environment – defined by lack of electricity, multiple taxation, extortion, congestion of ports, gross inadequacy of forex to consummate international transactions and much more, which is mirrored in the 51.3 per cent weak industrial capacity utilisation in June. Therefore, the ease of doing business that makes the economy competitive and attractive to foreign direct investment has become urgent.

Instructively, unstable power supply has continued to be the bane of the economy. As a result, industries and businesses are bleeding, paying huge costs for alternative energy to fill the gap. Due to corruption, the country missed the opportunity to utilise the neoliberal mechanism of privatisation, which works elsewhere, to stimulate economic growth in 2013, when the powers-that-be handed over the formerly state-owned electricity companies to their cronies and surrogates, completely ignoring the principles enunciated for the privatisation exercise. These new owners/operators neither had the financial nor technical capacity to properly address the power situation in the country. That privatisation scam should be revisited and the transactions properly carried out to give economic productivity a shot in the arm.

Fighting poverty is not a concern of the federal government alone. In fact, in the rural areas, it is more of the responsibility of states and local governments, being the tiers of governance closer to the people. The crisis can be scotched more effectively if governors redirect their development focus. The building of grandiose projects like airports, which are hardly ever used, international events centres and flyovers are now in vogue, which ought not be so. It is for this reason that Oxfam said, “Poverty and equality in Nigeria are not due to lack of resources, but…ill-use, misallocation and misapplication of such,” and more importantly, massive corruption or the brazen stealing of public funds. Construction of rural roads, especially in food producing areas, will boost agriculture from the perspective of crops harvest and evacuation to markets, especially to the urban centres. This will create wealth for farmers, reduce food inflation and improve the standard of living.

Henceforth, the Economic and Financial Crimes Commission (EFCC), and Independent Corrupt Practices and Other Offences Commission (ICPC), should improve the monitoring of the so-called constituency projects of federal lawmakers. These are, at best, phoney projects. Water boreholes, rural electrification and road projects; building of classrooms; erosion control; and the setting up of primary healthcare centres are considered as avenues for the siphoning of public funds. 2,399 of such projects were abandoned in 2013, according to the then Minister of Special Duties, Aminu Turaki.

BudgIT, a non-profit organisation that tracked 852 of the projects in 20 states a few years ago, discovered that 343 of them were never executed and the locations of some of them were not even specified in the budget. It then concluded that: “These projects were signed off and contractors got paid most of the fees…” If these projects had been faithfully executed, the lot of rural dwellers could have been different from the sad tales of the MPI.

With declining revenue, shortfall in crude oil output and massive corruption, the Federal Government’s commitment to the school feeding programme, conditional cash transfer, the plan to lift 100 million Nigerians out of poverty by 2030 and other anti-poverty schemes are facing serious headwinds. To escape this jeopardy requires urgent response in aggressive revenue mobilisation. Available evidence indicates strongly that blocking leakages in the oil sector, ministries, departments and agencies of government would be curative. In 2013, a House of Representatives probe revealed how 60 agencies generated N9.4 trillion between 2009 and 2012, out which they spent N9.1 trillion. They flagrantly violated Section 80 (1) of the 1999 Constitution, as amended, which prescribes the payment of such money into the Federation Account. The abuse has not abated with the way the Treasury Single Account is being run till date. It means that government runs two budgets, the visible and the dodgy one for a privileged few in the bureaucracy.

Nigeria has no choice but to win the war against corruption, defeat Boko Haram and its allies and entrench accountability in governance to extricate its citizens from the maze of multi-dimensional poverty. Other countries have done so. In Brazil, Lula Da Silva as president between 2003 and 2009 pulled 20 million people out of extreme poverty. He used some of the measures being applied here, but with stronger mechanisms for transparency and accountability. But here, N521 million was purportedly spent on the school feeding programme during the COVID-19 total lockdown, when pupils were at home. This remains befuddling.

This is why the President should eschew indifference, this time, in the unfolding scam in the 2023 budget, with the insertion of N424.8 billion in the proposed Appropriation Bill, as discovered by the national parliament. Two ministries and an agency affected have disowned this insertion, as well as the Minister of Finance, Budget and National Planning, Zainab Ahmed. Nigeria can no longer afford this ugly state-of-affairs.

EDITORIAL: A hopeful 2023, despite spiralling insecurity

EDITORIAL: Why Emefiele must go – now!