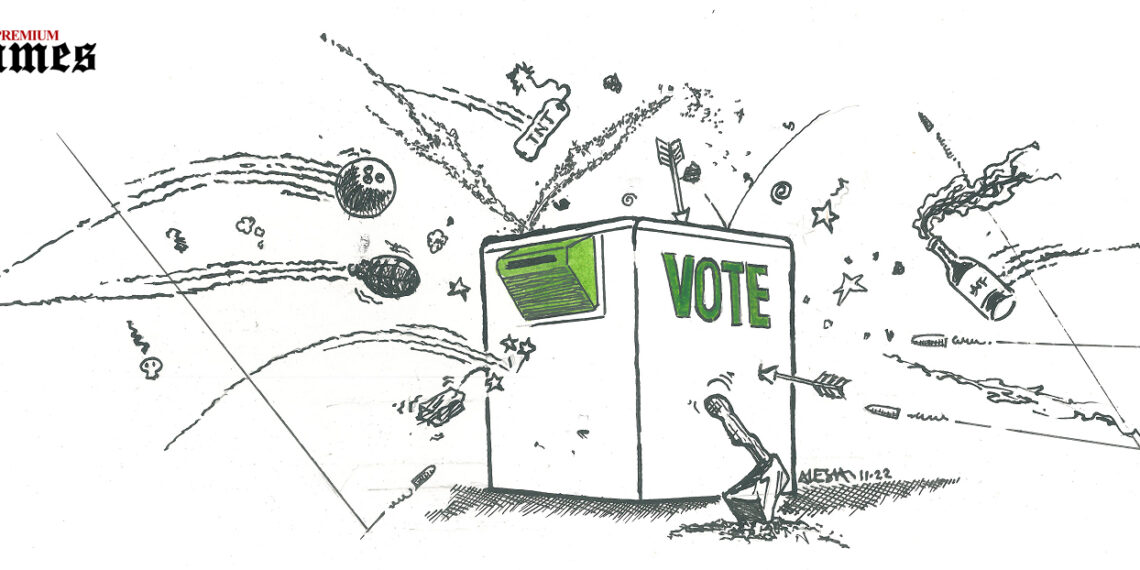 No democracy thrives anywhere with a “win-at-all-costs” mindset or the garrison mentality of the political elite to elections.

Alarm bells have started ringing on the cascading acts of violence in the country ahead of the 2023 general elections. The situation was so worrying that the Independent National Electoral Commission (INEC), the National Security Adviser (NSA) and other stakeholders, frenetically rallied to review it last week. The Chairman of INEC, Mahmood Yakubu, called on security agencies to act swiftly by arresting and prosecuting the perpetrators of election-related violence in accordance with the law, and to reinforce security around electoral personnel and infrastructure. Merchants of violence are toxins in Nigeria’s electoral system that cannot be treated as petty criminals anymore.

Incredibly, within a month – 8 October to 9 November, a total of 52 election-related acts of violence were recorded in 22 states. The NSA, Babagana Monguno, who disclosed this at a meeting of the Inter-Agency Consultative Committee on Election Security (ICCES), categorically described the development as “a bad signal.” He noted that some persons, whom he described as rogues, appear determined to disrupt the 2023 elections. The quick gathering of the ICCES was in the wake of the burning of the INEC office in Abeokuta, Ogun State, leading to the destruction of 65,900 uncollected Permanent Voters Cards (PVCs), eight electricity generating sets, 904 ballot boxes, among other materials. A similar attack on the INEC office in Osun State had happened earlier.

A fortnight ago, the campaign caravan of the Peoples Democratic Party (PDP) presidential candidate, Atiku Abubakar, was attacked in Maiduguri, Borno State. A similar fate had earlier befallen the party in Kaduna State. In October, there was an assault on Labour Party supporters in Nasarawa State at a rally, which resulted in bodily harm to some of them.

The reports of candidates being denied the use of public spaces like stadia for campaigns, town halls for meetings, destruction of campaign bill boards, defacing of posters are much in evidence. In Oyigbo, Rivers State, thugs prevented the governorship candidate of Social Democratic Party (SDP), Magnus Abe, from using a Town Hall, which he built as a constituency project while he was in the Senate, for a meeting.

With the elections still three months away, and the rate at which these perverse conducts are occurring, the 52 reported cases might well be dress rehearsals for bigger troubles ahead. Actual polling will take place between February and March next year. Election periods in Nigeria have become seasons for thugs to ply their trade for the highest bidders. With the proliferation of arms and ammunition, alongside unbridled, mindless killings of hapless citizens by bandits across the country, the unfolding assault on the electoral process by outlaws should be a source of concern for all stakeholders. Before now, some centrifugal forces had expressed their aversion to the conduct of the 2023 elections and underlined this by their disruption of voters’ registration, coupled with the killing and setting of INEC offices ablaze, as typified in the April incident in Imo State. The Commission’s offices had also been razed in many other states earlier.

As these electoral rogues have now bared their fangs, the only thing left is for the Federal Government to unleash its might in tandem with the threat of the NSA, reportedly handed down to him by President Muhammadu Buhari, that: “For as long as you decide to scatter the election process, the law enforcement agencies will be uninhibited and equally visit you with the consequences of whatever actions you take.” This is critical. Penal sanctions against electoral violence and other malfeasance are richly enshrined in the Electoral Act. What has been sorely lacking is the will power to enforce them. The Inspector-General of Police, Usman Baba, said that some arrests of these saboteurs have been made and investigations are ongoing. Regrettably, the story might just end there, going by the benefit of hindsight.

Electoral thugs don’t act alone. They are mainly sponsored by politicians who do all within their powers to get them off the hook once they are nabbed. Unfortunately, the big masquerades behind their dastardly acts are never unmasked by security agencies. Without the breaking of this jinx, PREMIUM TIMES believes that electoral-related violence will continue to be an incubus in our system and attempts to deal with it will be mere shadow-boxing.

Indeed, the stakes are very high towards next year’s election as the incumbent president will not be on the ballot and with economic hardship exerting a heavy toll on the lives of average Nigerians. For some candidates, therefore, every trick in the Machiavellian playbook must be employed to win. This has resulted in the broad embrace of ethnic and religious divides, incendiary rhetoric, hate speech, dis-information and intolerance. These provide fertile grounds for violence. But democratic contests are underpinned by noble ideals of tolerance, respect for each other, and triumph of the will of the majority.

No democracy thrives anywhere with a “win-at-all-costs” mindset or the garrison mentality of the political elite to elections. The failure of the Nigerian state to deal squarely with this aberration explains why violence and a heavy death toll muddle each electoral cycle. The EU Election Observer Mission, in its painstaking analysis of the 2015 polls, pointed out that 160 people were killed in election-related violence from January to the time of the polls. The killers were never found. It is worthy of note that any act of violence is a criminal indulgence to subvert the electoral process and hijack power. Such shortcut to public office can never be inspired by the desire to serve the people, but desperation to have access to the public treasury by all means possible. Therefore, these electoral bandits – the most dangerous of all bandits – must be checkmated.

Ironically, this task is a tall order with the duplicitous display of some security personnel in the country, who throw professionalism to the winds with their partisanship, while covering up crimes and getting corrupted by politicians. The Borno State Police High Command’s brazen denial of the violence that befell the PDP presidential campaign in Maiduguri recently, which was widely reported in the media and confirmed by Abubakar, in addition to the testimony of a bruised journalist, highlights this issue in bold terms.

The president has given countless directives to security agencies that were not complied with. His order to NSA Monguno for perpetrators of electoral violence to be brought to justice should not be neglected. It is one sure way of consolidating our present democracy. In discharging this responsibility, the security agencies should guard against professional blunders, which a former Interior Minister and ex-Chief of Army Staff, Abdulrahman Dambazau identified at a public lecture on security in August, where he said: “They operate in silos; they hoard information; and are reluctant to share intelligence as if they are in competition.”

INEC has, since the time of Attahiru Jega’s leadership, confessed that it lacks the capacity to effectively handle escalating electoral offences. Therefore, the ICCES, comprising the Police, Army, Air Force, State Security Service and others, has a lot of work to do. It should face this head-on.

On security: Questions for 2023 presidential candidates (10), By Adetolu Ademujimi